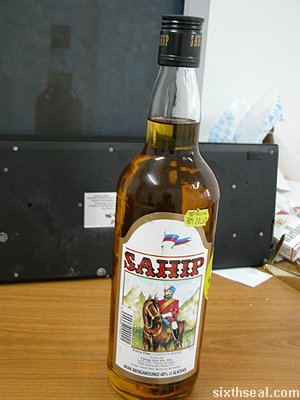 Sahip brandi (brandy) is another locally made “compounded brandy”.
It retails for RM 20.60 and can be recognized by the prominent Sikh
riding on a horse label. The brandy contains 40% alcohol. I’m not a big
fan of Sahip though…the “fusel oil smell” is particularly strong and
I associate that smell with cheap liquor. Anyway, if you don’t know
what fusel oil smells like, buy some lacquer from your local hardware
shop and have a good whiff. 😉 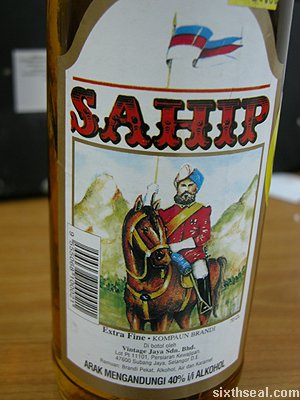 Well, beggars can’t be choosers, so let’s move on to the non-taste
related characteristics of this locally distilled brandy. It’s made in
Selangor by Vintage Jaya Sdn. Bhd. The effects are rather pleasant, and
this is nice and chuggable if you ignore the fusel oil. It will get you
the ethanol effects that you’re after…at a relatively cheap price.
However, if you balk at the smell of fusel oil in your drink, you’ll
probably want to avoid this. It’s pretty common with certain distilled
liquors and Sahip is one of them.