I wasn’t planning to explain anything on this blog. I wanted to keep the court case under wraps, but since the papers came out with it today, it seems that they have forced my hand. I did not talk to the reporters. It seems they got my details from the Kuching High Court staff.

Assistant Engineer fined for having drugs 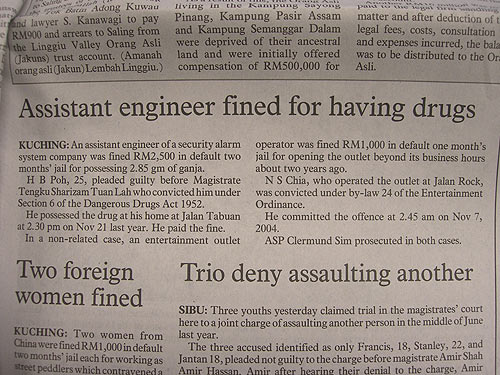 KUCHING: An assistant engineer of a security alarm system company was fined RM 2,500 in default two months jail for possessing 2.85 grams of ganja.

H B Poh, 25, pleaded guilty before Magistrate Tengku Sharizam Tuah Lah who convicted him under Section 6 of the Dangerous Drugs Act 1952.

He possessed the drug at his home at Jalan Tabuan at 2:30 pm on November 21 last year. He paid the fine.

Notes: Two thumbs down for revealing my area of work. This case is personal and has nothing to do with the company.

Also, thanks for butchering my title – it’s Systems Engineer, not Assistant Engineer. I know it sounds the same, but it’s not. 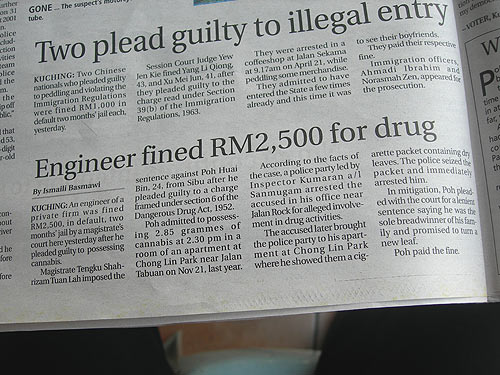 KUCHING: An engineer of a private firm was fined RM 2,500, in default, two months jail by a magistrate’s court here yesterday after he pleaded guilty to possessing cannabis.

Magistrate Tengku Sharizam Tuan Lah imposed the sentence against Poh Huai Bin, 24, from Sibu after he pleaded guilty to a charge framed under Section 6 of the Dangerous Drugs Act, 1952.

Poh admitted to possessing 2.85 grammes of cannabis at 2:30 pm in a room of an apartment at Chong Lin Park near Jalan Tabuan on November 21st, last year.

According to the facts of the case, a police party led by Inspector Kumaran a/l Sanmugam arrested the accused in his office near Jalan Rock for alleged involvement in drug activities.

The accused later brought the police to his apartment at Chong Lin Park where he showed them a cigarette packet containing dry leaves. The police seized the packet and immediately arrested him.

In mitigation, Poh pleaded with the court for a lenient sentence saying that he was the sole breadwinner of his family and promised to turn over a new leaf.

Notes: OMG! How did the Eastern Times get such detailed information?!?!?

That said, thank you very much for showing professionalism by not revealing the line of work I’m in.

There is something to nitpick though – it is technically impossible for someone to be arrested TWICE. I was only arrested ONCE – at my office. The PDRM Narcotics raiding party had details of me (directive came from Bukit Aman) so I had to lead them to my apartment.

Speaking of which, I also have much thanks for revealing where I live. Seriously. I’m indebted. I don’t know how to thank you enough.

I will only say what the papers have said. I don’t know if the Chinese dailies came out with the news as well, coz there were a lot of reporters there (Hello Connie!). I was indeed raided by a team from the PDRM (Royal Malaysian Police) Narcotics Division (Sarawak State contingent, instead of the local Kuching Division contingent) and arrested to be remanded (it’s a euphemism for locking you up) for 14 days in jail under the standard provisions to the Dangerous Drugs Act 1952 (ADB 1952) last year.

I was in jail for three days. It was not a pleasant stay, but at least they gave me access to my medication (benzodiazepines). I might or might not be doing a CPS Jail Kuching report. I met a lot of interesting people in there (some were in for Penal 302 – murder) and before you ask, my asshole is perfectly intact and still very much virginal, thank you very much. :p

I went to the remand court twice (being handcuffed behind your back is a bitch especially if you have an itch to scratch – and the handcuffs are not like the ones you see in movies – these are handcuffs with only a single short and solid metal bar in between, there is no chain link, so movement is SEVERELY restricted) and the first appeal was turned down and I resigned myself to a 14 day stay in jail (which isn’t really that bad, if you disregard the dirtiness – it’s the BOREDOM that gets to you).

However, I was released on my second appeal due to heavy lobbying that I wasn’t going to pull a runner (low risk skipping bail profile due to my career) and I was allowed bail before the standard 14 days so I was released after 3 days in jail. One thing I learned in jail is that it’s practically a University of Crime. I learned things in my short stay and made acquaintances that were heavily into crime.

I made a guilty plea during my court case yesterday. I did not want to fight the charges as it was a very much reduced charge. I had planned to plead guilty from Day 1.

This is my story and please do not complicate matters by asking inappropriate questions like “Why weren’t you charged with drug use as well during your urine test?” (instant 2 year rehabilitation sentence) or “Wasn’t there drug paraphernalia at your apartment?” (another DDA 1952 charge) “Aren’t there other drugs at your premises since you’re a poly-drug user?” (please refer to reduced charge comment above).

I maintain that only cannabis was found at my apartment and I am not a drug user. *cough* I don’t know how the cannabis got there, but it was there, so here I am with a drug possession charge. That is my official statement and that is the only thing I am being charged with – drug possession.

Thank you very much, dear readers, for all the support. I gave a lot to sixthseal.com and I sure hope you enjoyed it coz I sure didn’t enjoy my time in jail. 😉

Now that everything is over – regular sixthseal.com programming will continue as scheduled. 🙂