I’ve never been a huge fan of MSN emoticons. I think they’re rather juvenile and nearly cringed when I saw my beloved ASCII :) being automatically replaced by the

in MSN. I have become somewhat desensitized to the cartoonish nature of the emoticon in recent times though. It’s a little like how I used to cringe at the truncated :) in IRC and stuck to my fundamentalist smiley – :-) for ages before relenting to the truncated smiley.

I’ve always found the default MSN smiley a bit corny but have grown to embrace it and even love it. I have recently grown fond of the

emoticon too – a smirk of sorts capable of expressing a wide range of emotions from distaste to worry.

The one that takes the cake is a custom emoticon (Custom emoticons! OMG! I can’t believe how far I’ve traveled down this road!) I just got from a co-worker. I call it the sideways smiley and I’m growing to like it a lot. (!)

I’ve always thought of MSN custom emoticons as the realm of pre-pubescent teenage girls and now I’m experimenting with the cursed things! 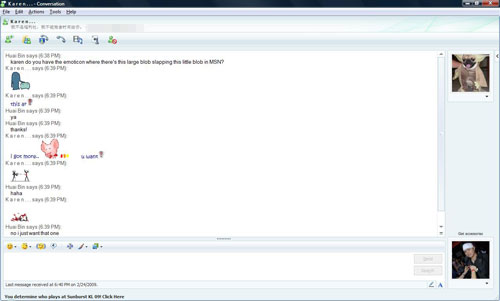 I fear for my manhood.

22 thoughts on “The invasion of the MSN emoticons”