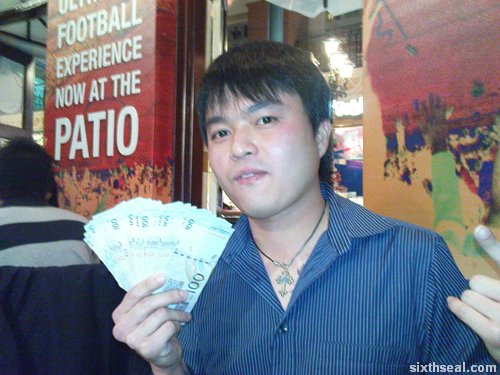 I was having dinner last night when Sze and I came out with this incredibly impulsive idea – we’re going up to Genting Highlands to hit the casinos and come back after winning RM 1,000. It was about 11 pm then and I was determined to get back the RM 35k I lost about a year ago. I was thinking positive this time – WIN! =D 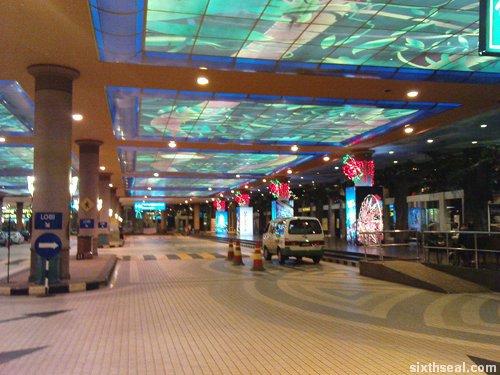 Thus armed, we proceeded to the casino and I headed straight for the Baccarat tables.

I put RM 500 on Player after getting my cash changed for chips.

Motherfucker! I was down to half of my bankroll. I put RM 300 on Banker. Player wins.

Player deals a 7. Player stands. Banker draws a third card. I thought this was in the bag until the Banker got a 9.

Player Double is a variation of Tie (8 to 1 returns). Player Double pays out 11 to 1. It’s only available on some tables and requires the first two cards for Player to be the same cards.

Player draws a 7 for the first card. I wasn’t looking, since I was a bit dejected at my FAIL plan to win RM 1.5k and was thinking about putting my last RM 100 chip on Roulette.

Suddenly, I felt someone grab me from the left. Sze was at my right so I was rather perplexed. This Chinese woman chattered excitedly to me and I looked at the table.

Player draws a double 7. 7 of diamonds and 7 of spades.

The Chinese woman kept on talking to me, telling me that I was very lucky. Yeah, it’s pure luck. Fortune favors the bold. 😉

I’m still down RM 700 and the cards were being reshuffled so we moved to the next table, where there is a lot of commotion. It seems that Banker is on a winning streak and there are tens of thousands in chips on the table – all on Banker.

I’m a big fan of Player and generally going against the odds (which is why I lose most of the time).

I put RM 500 on Player. I was the lone one in the entire table betting on Player.

Player draws a 6. The crowd goes berserk, coz Player stands while the Banker draws a third card. I don’t know why but I’m sure I was gonna win this round. I’m not gonna lose going against the grain. No way, Jose.

I watch with glee as the dealer takes all the chips on Banker and pays out RM 500 to the sole Player bet – mine. =D

I decided to go over to the Roulette tables and put RM 200 on 6. I usually don’t stay this long in a casino; I like to get in and out fast coz the odds are always stacked against you the longer you stay. The house always wins.

The ball settled on 11. I think this is a pivotal experience and made me do what I did later.

My chips are now at RM 1,900 – just RM 100 short of my initial bankroll. I need to increase my bets and get the hell out of there ASAP.

I put RM 500 on Banker, thought better of it, and moved it down to Player. Player wins!

I put RM 500 on Player. It’s a tie. The same Chinese woman beside me lamented her situation with great fervor to me, saying that she was about to put some money on Tie.

I left my RM 500 chip on Player while the other players take their chips back and think (or whatever it is they do). I’ve never understood this. It’s not gonna change the odds. It’s like a superstition of sorts. I always keep it at the same place.

Before the dealer starts to deal, I impulsively put RM 100 on Player Double again.

This time, I’m watching. I had hoped to win the RM 500 player bet, the RM 100 on Player Double is just an random bet I made from seeing the number 11 on Roulette just now.

Player draws a 6. I wasn’t looking at the Banker cards. The dealer took out the second card for Player and opened it. I’ll be fucked. It’s a 6!

The Chinese woman was OMGWTFBBQ at my sheer luck. She just witnessed me winning RM 1,100 twice on a very improbable bet (Player Double).

Now, I had to play closer attention. I still had RM 500 riding on Player.

The game was a tie.

The Chinese woman again lamented excitedly about how she was gonna put some money on Tie since the previous game was a tie too. She also attempted to touch me to “get some of my luck”.

I would have loved it if Player had won since I’ll have walked away with RM 2,000 if that had happened. But I can’t be greedy. I told Sze we’re leaving. She asked me how much I’ve won. 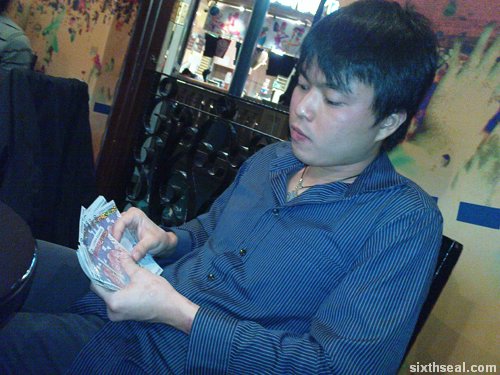 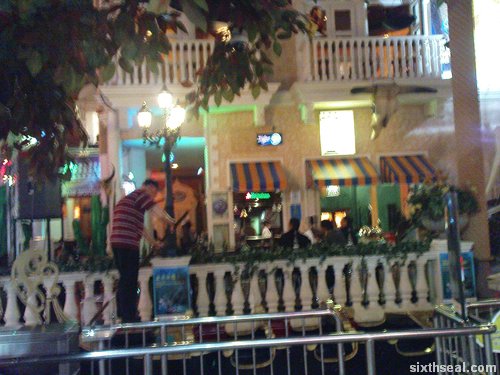 I returned Sze RM 800 with some interest and we adjourned for drinks. 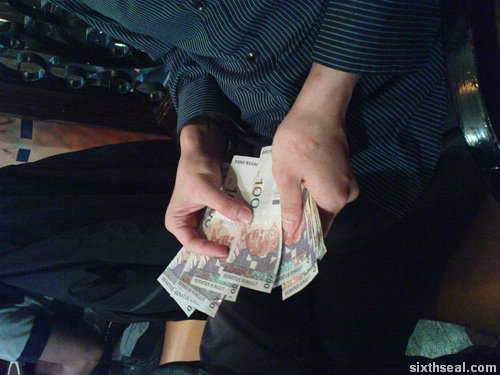 I was quite happy about walking away with RM 1,500. I never stay back after I’ve won what I decided to win. You can’t be greedy coz the house always wins. 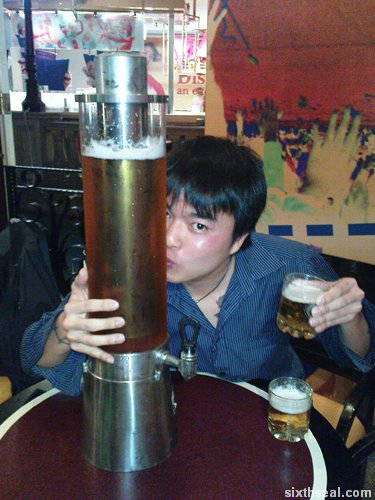 I ordered a Beer Tower (RM 179++) which has the equivalent of 2 1/2 jugs of beer. The price is kinda steep but this calls for a celebration! 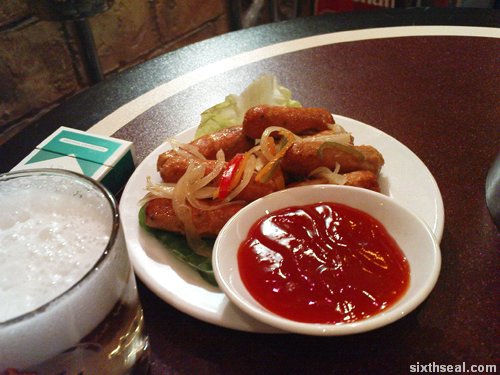 I tipped the bartend
er about RM 15 or so and he was quite happy about it. He gave us complimentary sausages. 🙂 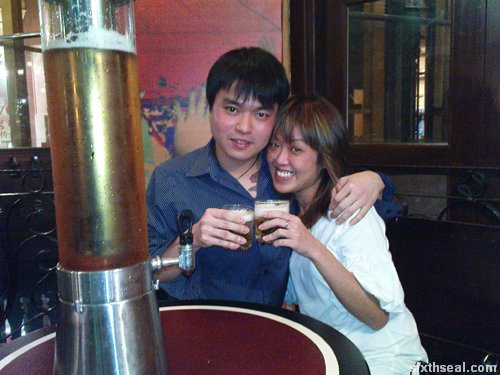 I hailed a taxi after we finished our beer tower and got back at about 3 am. Dinner was about RM 88, the taxi ride to Genting cost RM 80 and the return trip RM 110. Minus the cost of the beer tower, I had netted RM 1,000 that night.

The house always wins, but not last night. 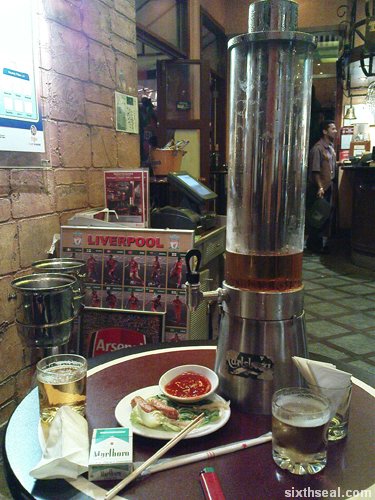 46 thoughts on “The house does not always win”