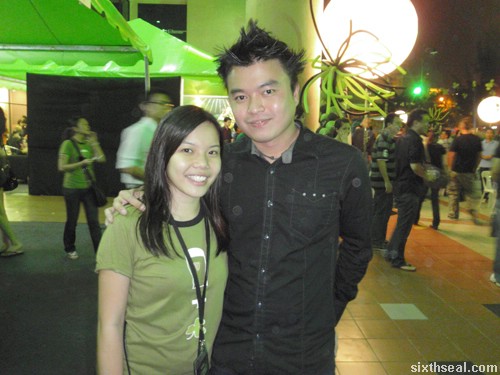 The luck of the Irish! Thanks to my good luck charm Jerine and everyone else at St Pats who wished me luck, not forgetting our friendly taxi driver too!

I decided to go up to Genting after St Patrick’s to fund my Hong Kong trip next month. I went into the casino with RM 7,000 but bought in RM 6,500 for Bacarrat. I missed the first round coz I was counting the chips and thank God for that! It came out as Banker and I was going to bet Player. Anyway, this session was nothing short of amazing. I bet RM 1,000 on Player three times and won every single time – with a 9 to boot, the highest possible number.

I wish I had bet my usual RM 2,000, which would have netted me RM 6,000 but Jerine told me to play small so I halfed my usual bet. It’s probably a good thing coz if I had put RM 2,000 I might have been more inclined to follow the trend – I broke a 9 Banker dragon (Banker came out 9 times in a row) in my first bet. I went against all the other punters and was the only person on the table with money on Player. 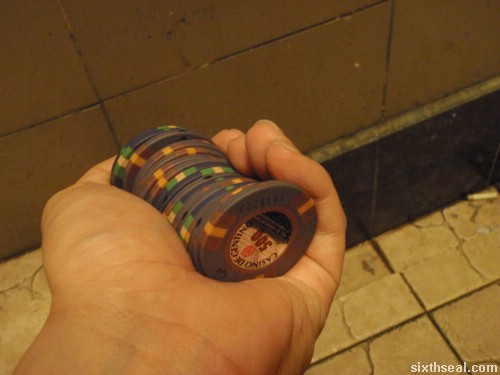 I swear to God with Jerine as my witness, as soon as I got there and the dealer called out “No more bets” (so I had to wait for the next round) the ball settled on…

Oh well. I decided it could still happen, but so I placed my bets and 0 was the number that the ball decided to stick to. 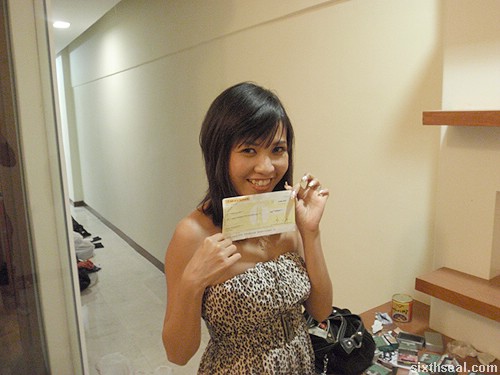 However, a word of caution – if you can win 3 times in a row, you can lose 3 times in a row too. It could have turned out the other way, but it was good for me this time…again. 😉 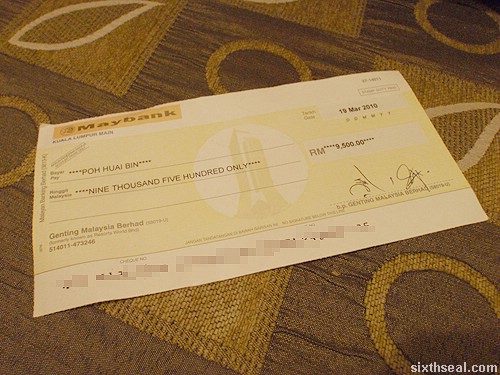 Oh, and one last thing – if you want to get a cheque from Genting, always get it as a non-winning cheque a.k.a. losing cheque. The cashier will give you the option to do so. It’s just for their records. If you get a winning cheque, you will be taxed for it – by the government, not Genting so they don’t really care even if you won but requested for a non-winning cheque.

Come to think of it, I seriously have the luck of the Devil himself. Heh!