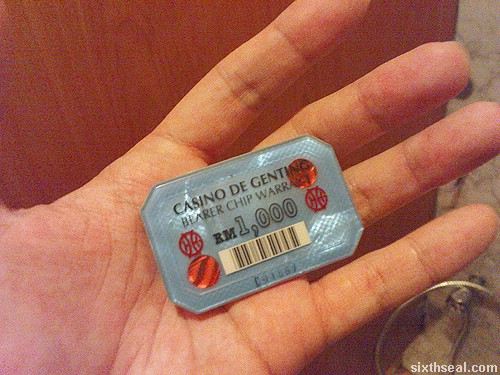 The Signs (TM) were all there. I lost my ATM card so I had to withdraw from my credit card instead. I went up with the sole intention of winning back my Auckland losses (RM 5,000). I was talking about chasing the dragon when I went up but my obstination made me go against it.

Anyway, let’s cut to Auckland Sky City Casino. I actually WON in New Zealand with a paltry NZD 2,000 buy in. I started REALLY badly and was down to about NZD 300 when I chased this Player dragon that netted me a cool NZD 2,100. There I was, with NZD 4,100 of chips which I cashed in and sat for 45 minutes drinking beer while waiting for my friend to finish her game. 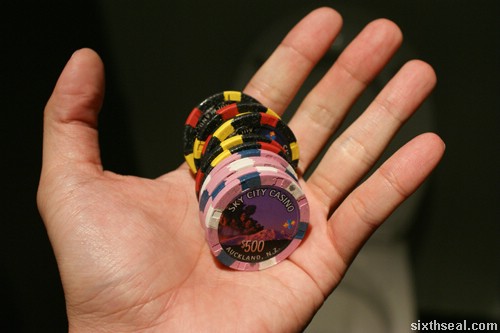 I’m not very good with waiting so in the end I started playing again. I was very, very drunk at that point and was just putting money on the Blackjack table, holding with a 6 and other stupid stuff like that. Not surprisingly I lost the NZD 2,100 plus my buy in of NZD 2,000. That’s about a RM 5,000 net loss (not factoring in the win, else it’ll be something close to RM 10,000).

Back to Genting, I just had an urge to head up this weekend, coz I had nothing to do. Thus, I headed up with RM 2,000 (with the intention of withdrawing an additional RM 4,000 from my credit card when I get into the International Room). We were staying in First World Hotel so against my better judgement, I went into that casino first.

There was a Banker dragon going on. I bet 1k on Player (against the dragon) and lost. I bet another 1k on Player (talk about obstinate!) and lost again. That’s the end of my RM 2,000 buy in so I had to head to the main casino. It didn’t help that the Banker dragon was broken RIGHT AFTER THAT with four Players in a row, which, if I had withdrew the cash first, would have made me win.

Thus, down by 2k, I went into the IR and withdrew RM 4,000 in 4 x RM 1,000 chips (shown in the first photo) and sat down on Elite Baccarat. I put 1k on Player as usual and won. However, in Elite Baccarat you have this option to switch and I accidentally switched (wanted to hold) and lost the 1k.

It was a series of unfortunate events which happened really rapidly after that. I was betting with my emotions instead of my analytical skillz. I went Player all the way. After a couple of wins and losses (got a natural 9 once, and a really lucky win of 3 vs 2).

However, at the end of it I was left with a sole 1k chip which I went to the toilet to take a photo of before heading back to the table. While I was away, Player won 3 times. >.<

I lost a total of RM 6,100 (RM 100 was a last ditch attempt for a comeback by putting it on the number 6 on Roulette) and now I have to eat Maggi Mee every single night to save up for my condo. T_T

It’s just life, sometimes you win, sometimes you lose. My approach to betting is just too risky. A man beside me can absorb the losses coz he bets RM 100 – RM 200 each round. I don’t play for fun. I play to win so I reduce the times I have to play by betting high.

Anyway, I’m going to have to skip Subway and Dominos and cook 2 packets of Maggi with 2 eggs every night from now on. I’m NOT going up to Genting anymore until I purchase my condo.