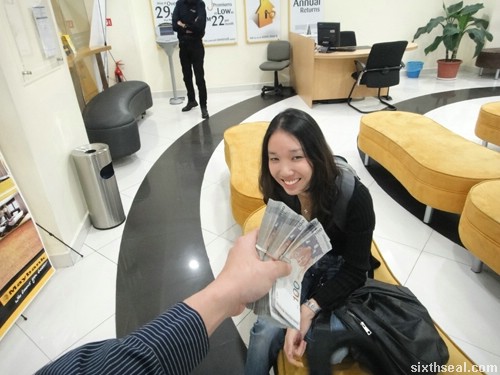 Haih. Damn no mood to blog la. I went up to Uncle Lim’s domain armed with a bottle of Absolut Flavor of the Tropics which impaired my judgement for an overnight stay (and a bit of gambling on the side).

I should have left at this point. I wanted to go to Port Dickson, but all the rooms were booked, and actually made a reservation for Fraser’s Hill. Unfortunately, it was raining so after a bit of thought…Genting!

Now, if I had left at that time, I would have gotten a bit of pocket money minus the trip costs.

Unfortunately I made a second bet (also 2k) and lost, before switching tables and lost all of my initial RM 6,400 buy in.

This forced me to go to the International Room to withdraw RM 5,000 from my credit card. I was actually up at one point, playing Baccarat. 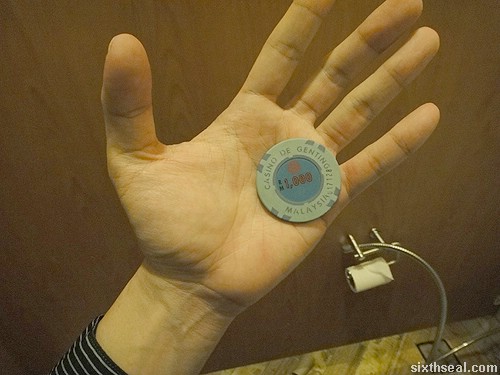 However, two bad decisions (going against the dragon instead of chasing it) with a RM 4,000 bet each time made me lose RM 12,000 (inclusive of credit card charges).

Now, if that is not bad enough, I went out, and was about to check into the hotel when I saw Maybank. My ethanol impaired decision made me withdraw RM 21,000 from my savings account. 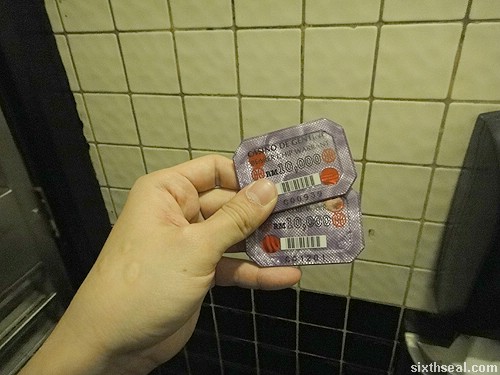 This is SINK OR SWIM. It is the deciding factor of whether I would lose big or win back all my losses plus a neat RM 7,000. It was the: 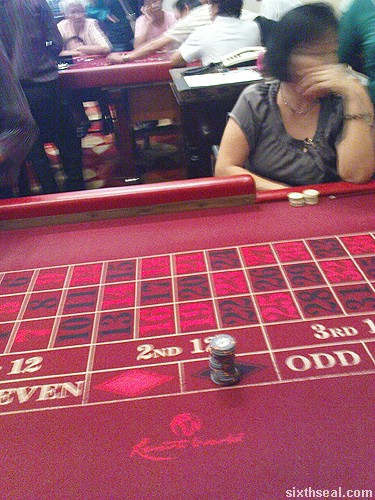 Photo discretely taken with my cell phone after I finished texting someone.

Look at the pile of chips on Black. Motherfucker. That’s all mine. It’s only 10k though.

The RED DRAGON (fuck you, cunt face) which I attempted to break was stronger than I thought it was. It turned out to be Red.

My obstination made me bet AGAINST the dragon again, with the last RM 10,000 bet on Black.

Yeah, bitch guess what? It was RED!

Fuck! I am allowed to use expletives in this post coz 30k is nothing to sneeze at. 🙁

The next day, I went on Rapid Roulette and the slot machines. The damn one armed bandit got me up to RM 700 with just a minute RM 400 buy in but how can I be content with that when I have lost so much?

As Mike a.k.a foodcrazee put it, I “smelled blood” and went in for the kill. Hazardous coz the house ALWAYS wins.

If gambling was a game and there is a Save Mode I could have gone back to many places:

1. The initial RM 2,000 bet on Roulette and RM 300 on a number. That netted me RM 1,700 – more than enough for trip costs. I should not have been greedy. I should have left there and then and checked into the fucking hotel.

2. In the International Room, I was up by RM 11,000 and made a stupid RM 4,000 bet on Player during a Banker run (Banker dragon). I should have shifted to Banker. To compound the mistake, I made ANOTHER RM 4,000 on Player, which I lost as well.

3. My friend saw this table with a Black dragon on Roulette in my last ditch attempt to do a comeback. If I had gone to that table, this post would have been very different – it would have the title “COMEBACK KING!!! Won RM 7,000 after a huge loss. Hail to the fucking King baby”

4. In the International Room, I had a single, lone RM 1,000 chip and put it on 29. There was a HUGE influx of people changing money and placing their bets and I got very impatient and wanted to move to the next table. I should have…coz guess what? That table came out with 29. Motherfucker! I would have covered my losses and went out with a couple of thousands if that had happened.

However, that is gambling. It’s like Choose Your Own Adventure (remember those books?). If I had done things differently. If only:

IT COULD HAVE GONE SO DIFFERENTLY!!! I could have won.

Well, all that didn’t happen and it’s not a children’s book. I’m not even going to sulk coz hell, that’s what every loser says so I’m not going to say it.

The principles of gambling is “WHAT IF”. What if all that happened and I added more cash to my condo fund? That is the hook, that is the line, that is the sinker.

There goes my condo…and my trips…and even my fucking F&B.

On the bright side, perhaps eating bread and water would stop me from my daily drinking. I can’t afford to drink anymore. To be honest, I only have RM 107.35 to my name.

Oh well, it’s all my own fault and I shall take all the blame.

I shall console myself with a phrase I learned in China:

It means “Money is a curse, spend it and earn it again“. 😉

All photos taken using the Sony Cybershot TX-5 except the crappy one discreetly taken on the Roulette table.