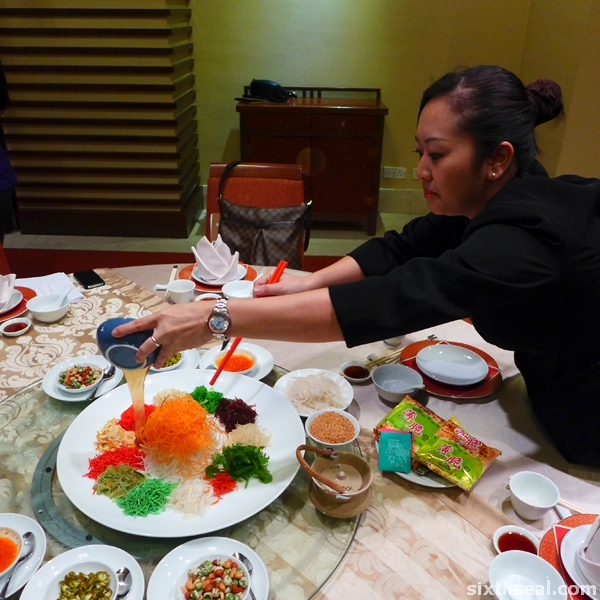 I was invited by Suanie to come along for my first yee sang dinner at Tai Zi Heen. It’s the resident Chinese restaurant of Prince Hotel & Residence and I was quite impressed by the view looking out of one of the private lounges: 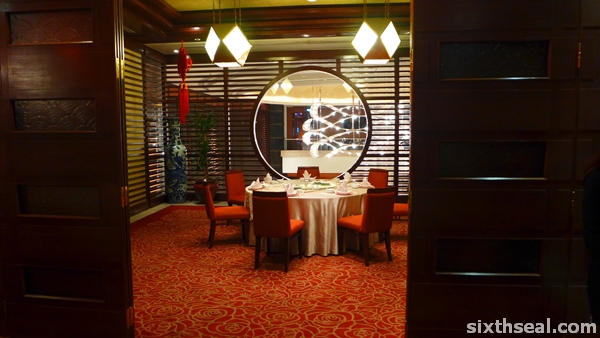 It’s glass so you can see the entire lobby without the noise intruding. You also can’t jump out of it, so if you’re scared of heights, don’t worry, it’ll take quite a concerted effort to do so. Haha. 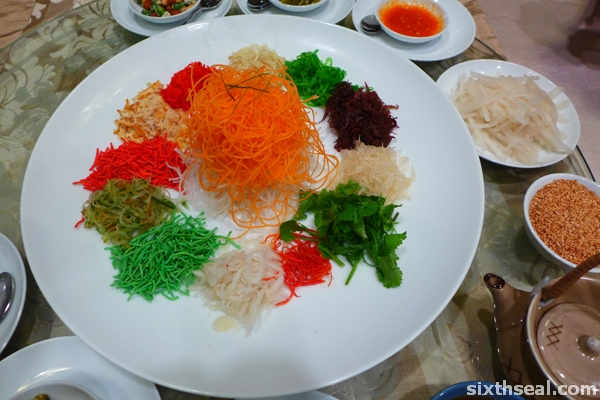 This is the traditional first dish – yee sang (which actually means “raw fish”) is an imported tradition where you toss a salad (of sorts) while wishing for something. The very polished waitresses says a couplet of prosperity, health and general good wishes when she adds each ingredient – a rather nice touch!

You can see her doing just that. The video also shows the yee sang tossing session. If you strain your ears hard enough you can hear me say “Win 4D”. I’ve never won before and that very day (after an impromptu decision to get a couple of lottery numbers) I managed to win slightly less than RM 1,000 (about USD 300). 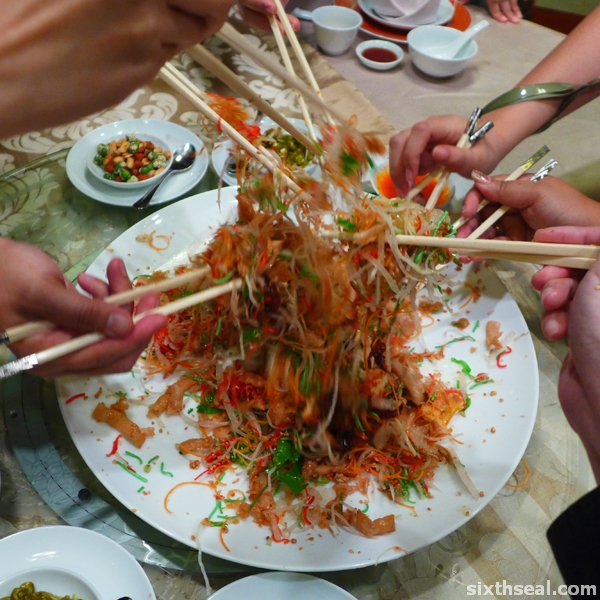 That’s some mighty wish fulfilling yee sang going on there. 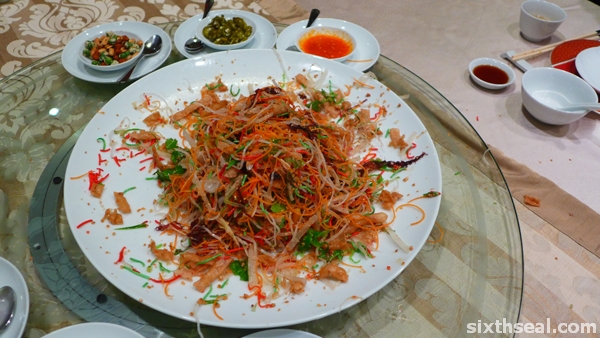 I do like the addition of snow pear instead of salmon or jellyfish (which they both offer) – it makes the entire yee sang more crunchy and sweet.

I liked this dish as well although it’s not customary to serve it with lettuce (there’s more unique dishes coming up). Fatt choy is a type of bacteria that produces a very hearty and distinctive flavor – it basically absorbs whatever sauces are around. 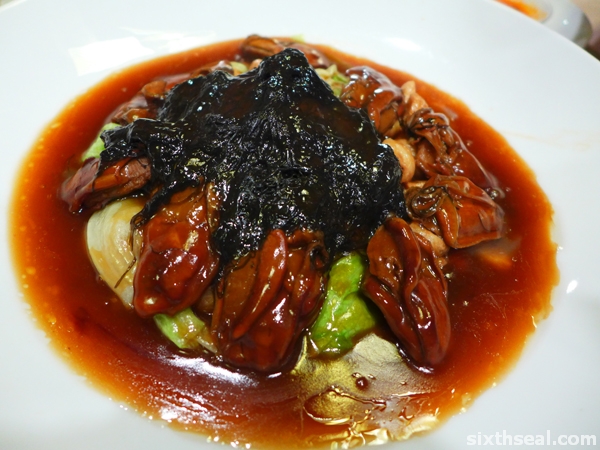 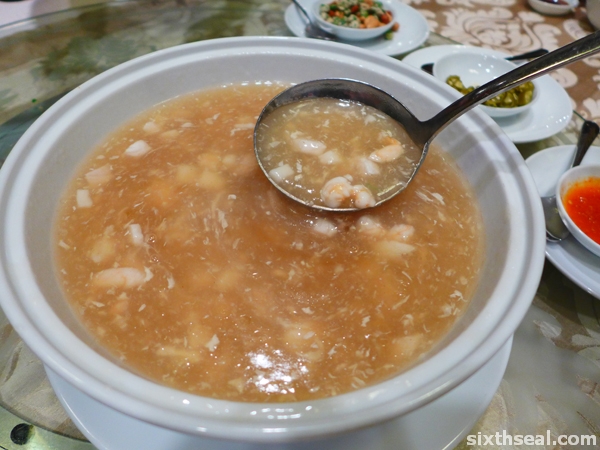 Oops! Did I use the S-word? Well, you can ask for it without shark’s fin as well. It tastes just as good – the combination of prawns, scallops and grouper makes it a very sweet broth. 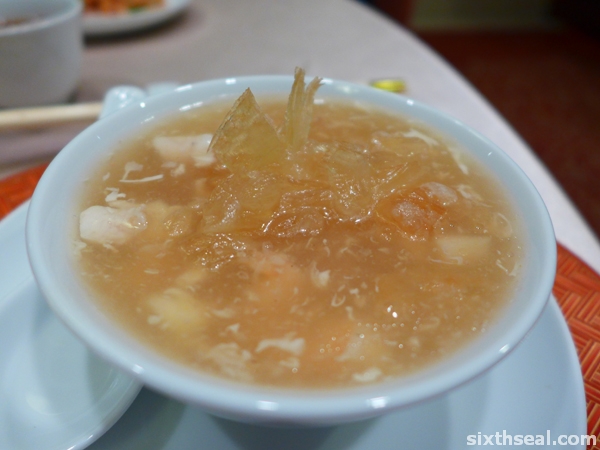 I really liked this one as well.

I was expecting regular sea salt but they used five spice salt, which vastly improves the taste of the roasted chicken. There’s plum sauce on offer too, but I’m probably not the best person to ask about roasted chicken. I didn’t like it, but all the other diners were in agreement that it’s delicious. 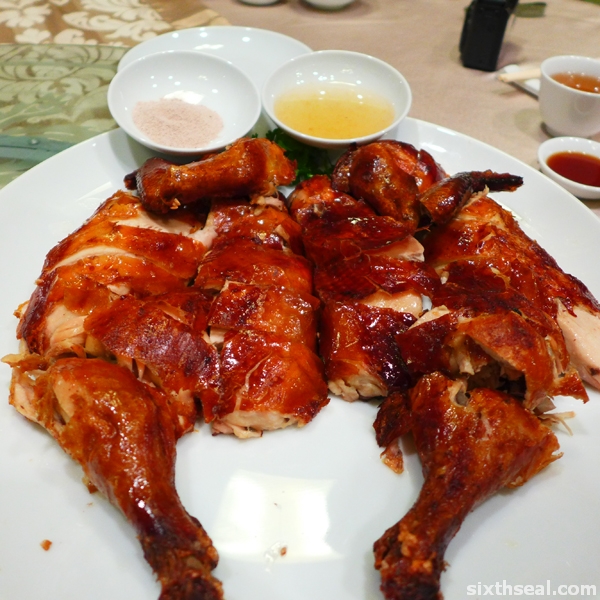 There’s nothing wrong with it, I just don’t like roasted chicken.

This is the flagship of the Chinese New Year banquet. Well, to me anyway. It’s a fusion dish made with mushroom, onions, cheese and turkey bacon. Yup, this is a halal outlet. 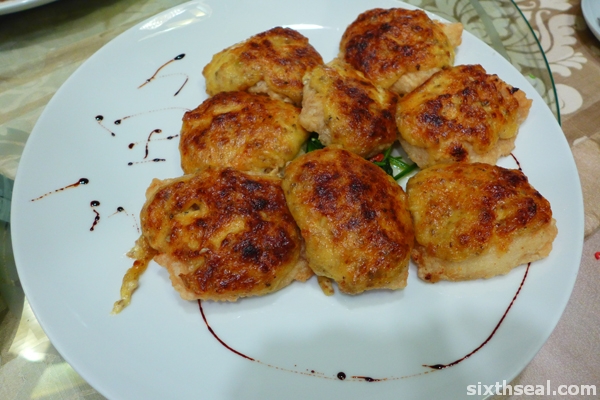 Check out the plating – there’s a Chinese character written on it with sauce. 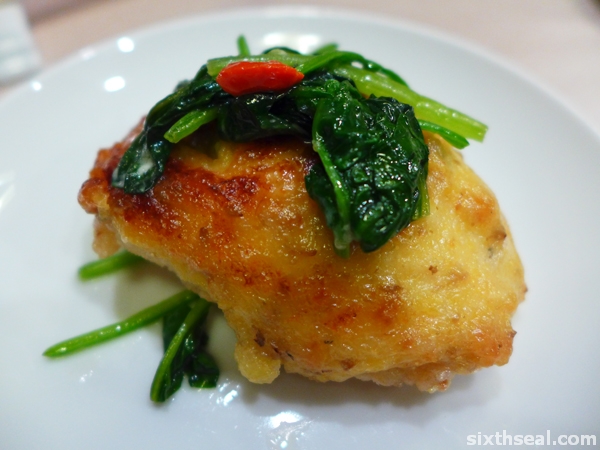 The ingredients goes really well together and the result is this magnificent piece of cod that’s baked and dripping with cheese and bursting with flavor. I highly recommend this one, it’s not in the regular Chinese New Year menu but you can ask for it – it’s the Chef’s Specialty. 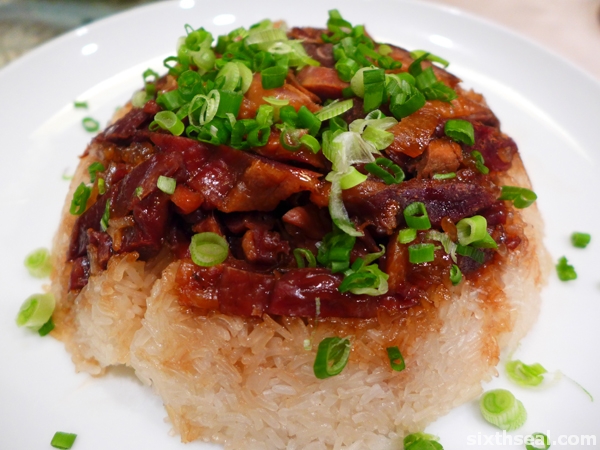 Waxed meat is another traditional Chinese New Year meal. This one is done Hong Kong style and I have to say, it’s one delectable dish. The saltiness of the duck is offset by the rice and the best thing about the dish is that there’s some stir-frying action going on.

This is basically tong yuen swimming in a concoction of milky almond. It sounds simple but it’s heart-warming food. The glutinous rice balls are filled with black sesame too. 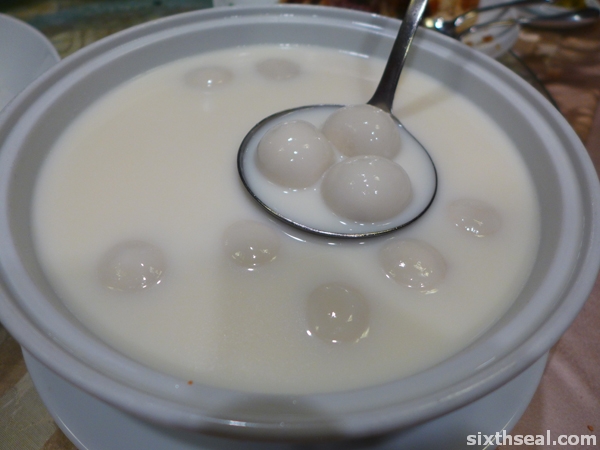 It’s a righteously hot dessert that makes you feel all warm and fuzzy inside. 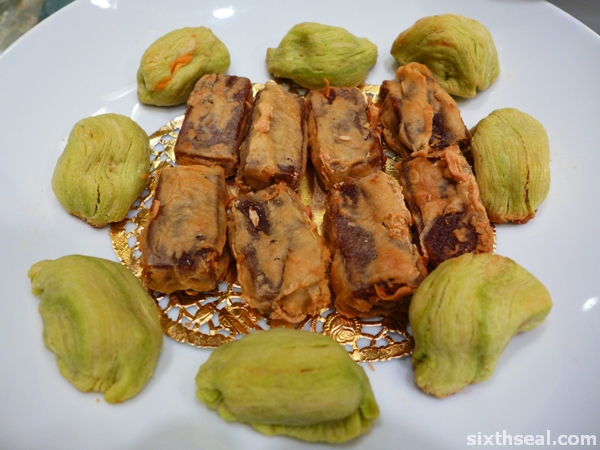 This is actually two desserts. 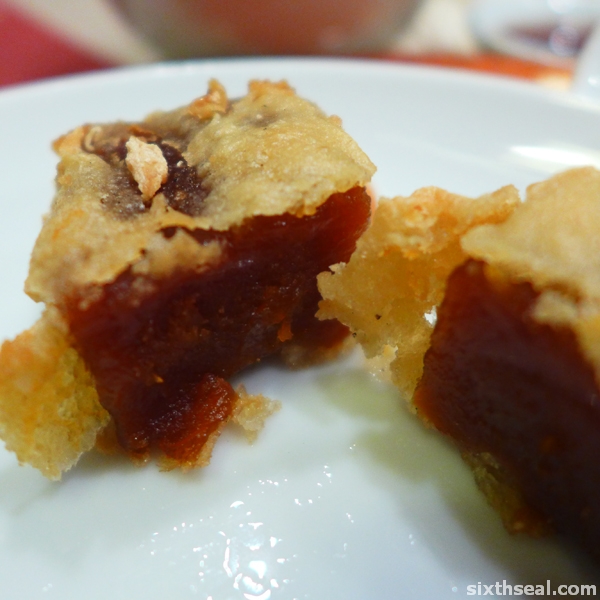 The first is nian gao (the above-mentioned Chinese New Year cake) dipped in batter before being deep fried. It’s a wonderful execution – much better than what I’m used to eating at home. The nian gao is made in-house and that makes all the difference – it’s not saccharine sweet and more suitable for adult palates. 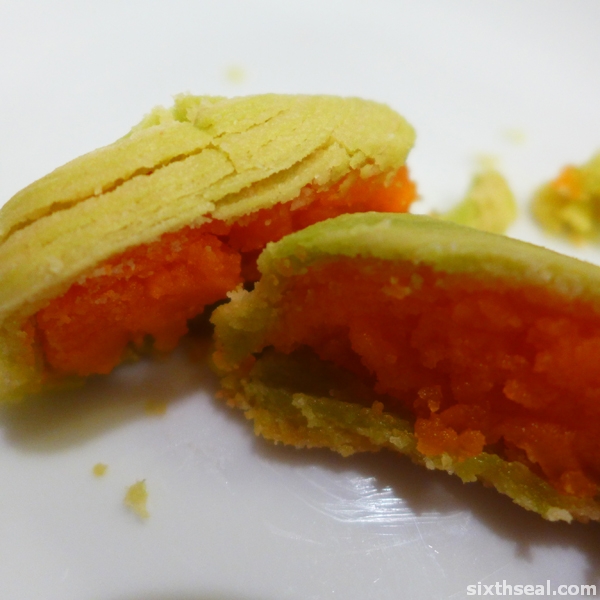 The second dessert is the Thousand Layer Puff Pastry – a silkworm like cocoon surrounding a sweet corn and salted egg based interior. The crumbly texture of the pastry gives way to the warm salted egg filling. It’s still sweet, but has that tang of saltiness from the salted egg. I loved this so much I ate 4-5 pieces! 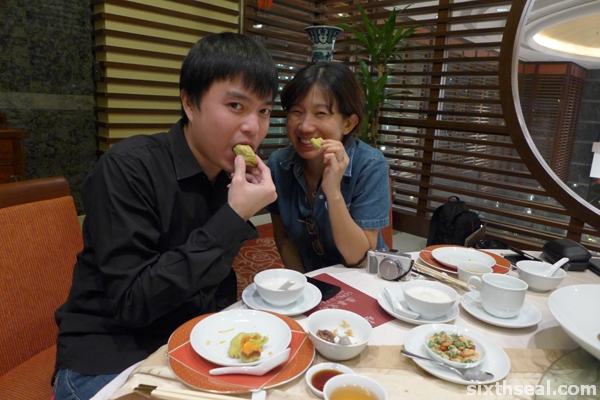 You’ve gotta eat it while it’s still hot though. 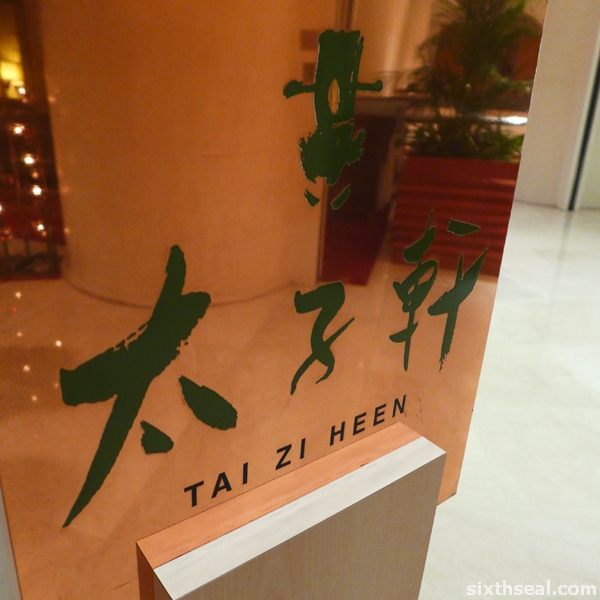 Tai Zi Heen @ Prince Hotel has 3 different Chinese New Year menus, starting from RM 1,188 for a table of up to 10 people. It was a cozy dinner, with just the six of us sharing a banquet meant for 10. It’s also a halal outlet, which I was quite surprised to find out (asked about the usage of turkey bacon instead of real bacon). 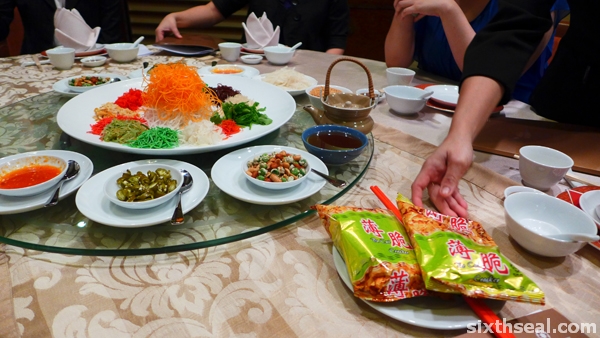 The restaurant does a great Chinese New Year banquet and the Chinese New Year menu is on offer from now till 24 January 2013 – Chap Goh Meh. I particularly liked the baked cod fish so ask for it if you’re there – it’s really something else. 🙂 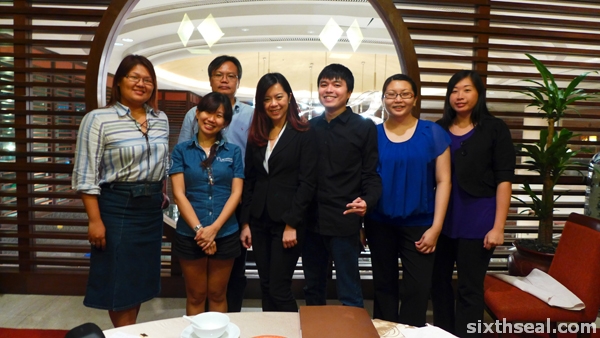 Thanks for having us over Elisa! Happy CNY everyone! 😀