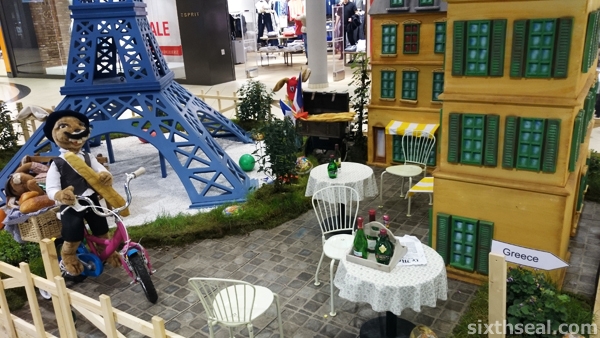 These are themed Easter displays we saw at a mall called Skyline Plaza in Frankfurt, Germany. Each Easter display is intricately made – with a lot of detail and even moving parts! They depict cities all over Europe, each with it’s own unique touch. 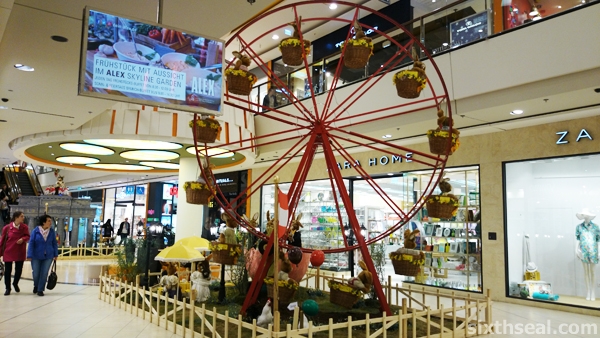 This is one of the more elaborate displays. The Austrian Easter display features a full-size moving Ferris wheel! The amazing thing about it is that inside each car, there’s a different posed Easter bunny couple, each pointing at a different place. 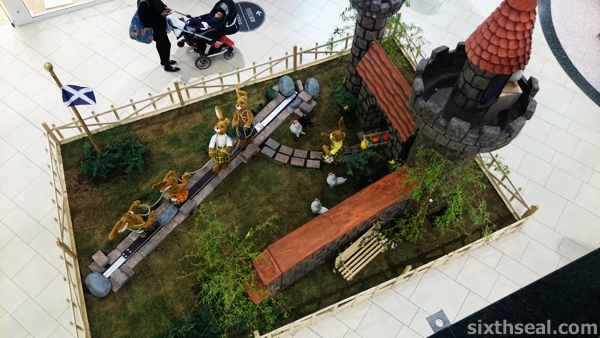 This has a full sized castle at the front with a pastoral land vista at the back. There are two teams of Easter bunnies playing tug-of-war!

The tug-of-war display actually moves back and forth using hydraulics and is probably the longest one in the history of the world since no one actually wins – the moving parts kicks in and reverses before a team goes over so they’re perpetually tugging! 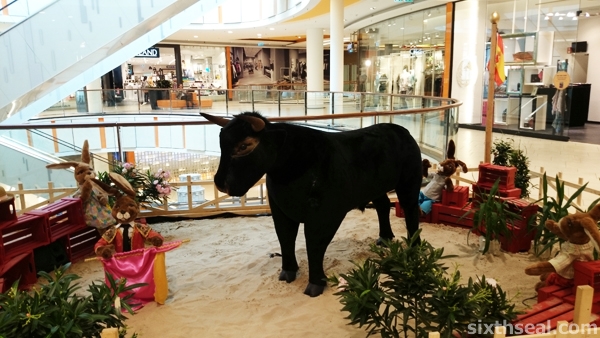 This Easter display has a charging bull as it’s main centerpiece. The black bull is set on sand and even has marks made near the hooves so it looks like it’s charging. There’s an Easter bunny with a piece of red cloth as the matador.

There are even bystanders and people in the stands cheering! 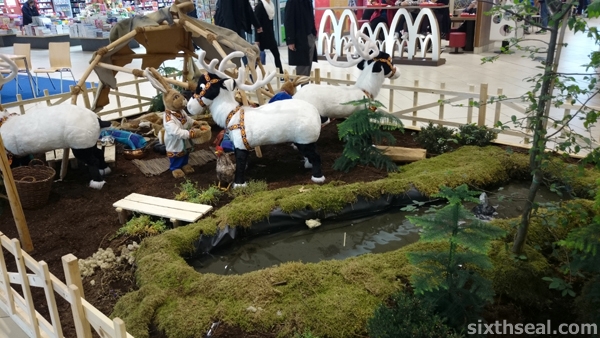 The reindeer graces the display for Finland! The Easter bunnies are seen tending to the reindeer and each of the graceful beasts are slightly larger than the bunnies, making them life-sized in comparison. There’s also a running body of water beside it. 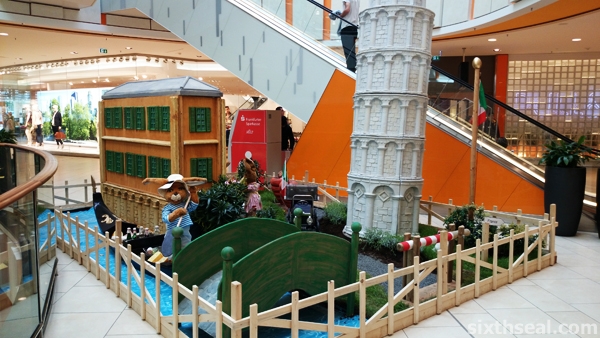 Well, since this is a secular display, there’s no Holy See in this Easter special from Italy. However, there’s a scene depicting the canals of Venice (complete with an Easter bunny operating a gondola), the Leaning Tower of Pisa and a sign that points to France! 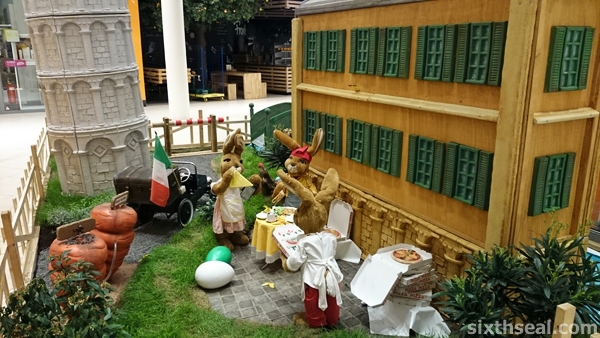 Also, there’s an Easter bunny with a pizza, considering the pie was invented in Italy! 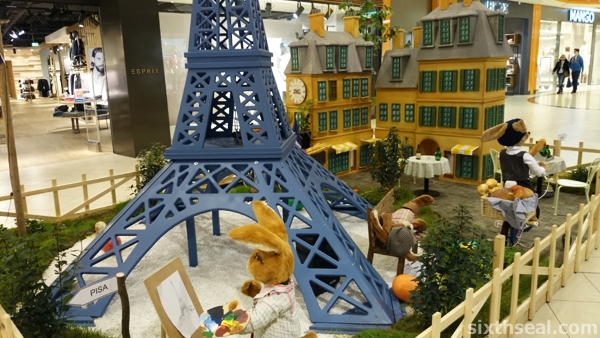 The Eiffel Tower is the most prominent feature of this Easter display but there are touches that makes it very France! There’s an artist to the side that’s painting watercolors from a board and also a café setup with a French waiter (carrying baguettes). 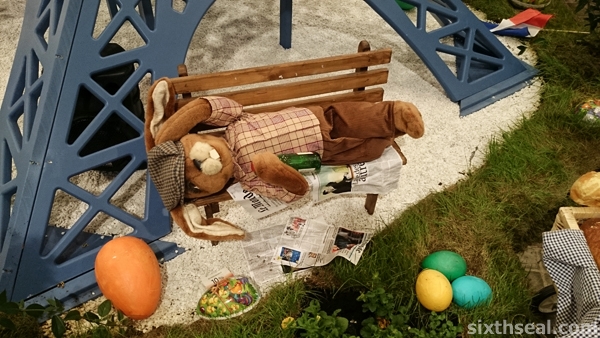 However, the funniest bit in this creation is a drunk Easter bunny with real bottles of wine lying on a bench! Hilarious! 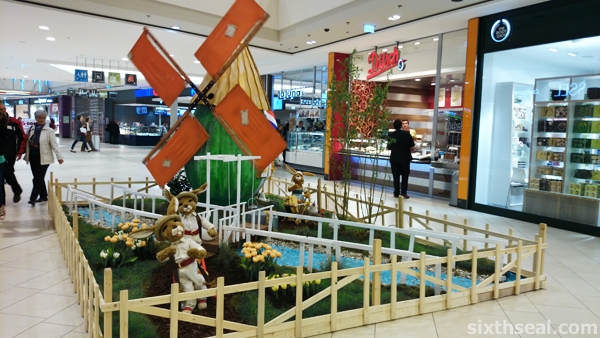 This windmill dominated Easter display is from the Netherlands! The windmills all have moving parts and the best thing is that there’s a canal (like the ones in Amsterdam) running through the display with a pump that allows the water to flow!

There’s also two Easter bunnies carrying a wheel of Edam cheese – the most famous and popular cheese from the Netherlands. I just love the detail. 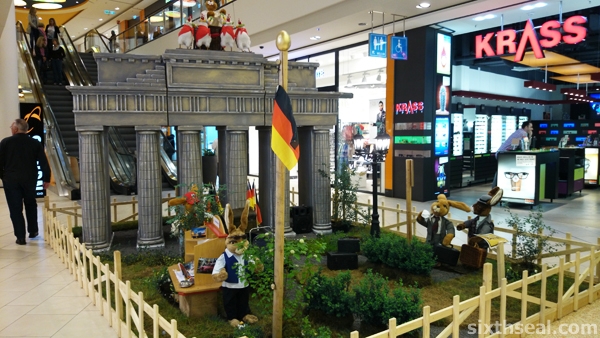 This is the home Easter display and shows the flag of Germany over a group of three Easter bunnies all doing different things. There’s a car featured prominently as Wolfsburg is home to the Autostadt. Interesting fact: The Autostadt is the second-most popular theme park in Europe after Paris Disneyland! 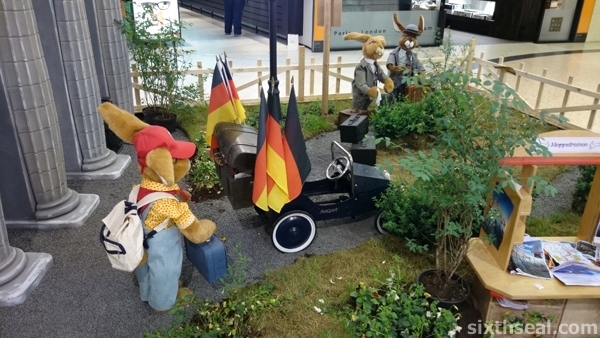 The scene at the back depicts Berlin but in a humorous touch, there’s actually a mini-desk inside the display with travel brochures and you can grab one for Frankfurt. Haha! I thought that was pretty smart. 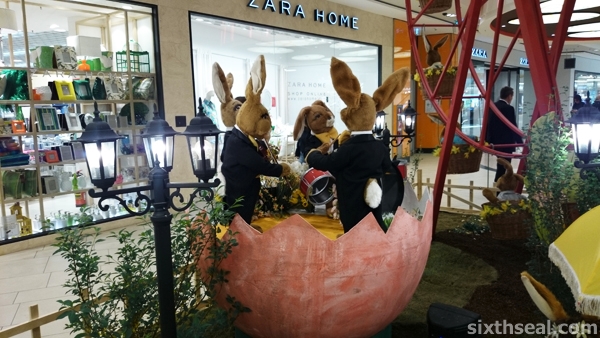 20 thoughts on “8 beautiful moving themed Easter displays from around Europe!”