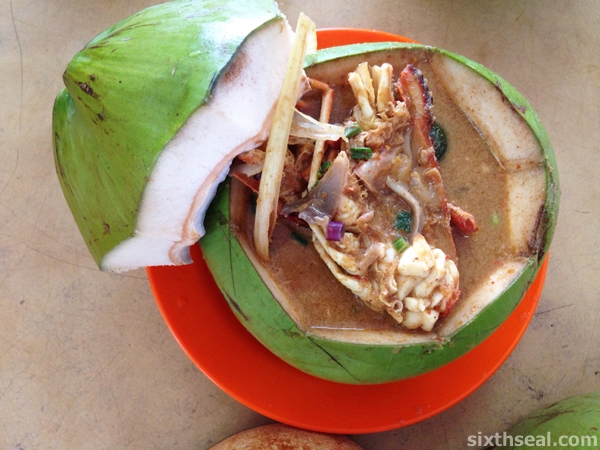 Behold! This Coconut Tom Yam Big Prawn Noodle is the latest innovation from Glory Cafe in Sarikei and it’s not just served inside a coconut, it’s cooked with *coconut juice*! I’ve been eating their famous tom yam spin on big prawn noodles since 2008 and it’s worth the hour’s drive from Sibu. It used to retail for RM 14 and was subsequently raised until the current price at RM 33 per bowl (or coconut, rather). 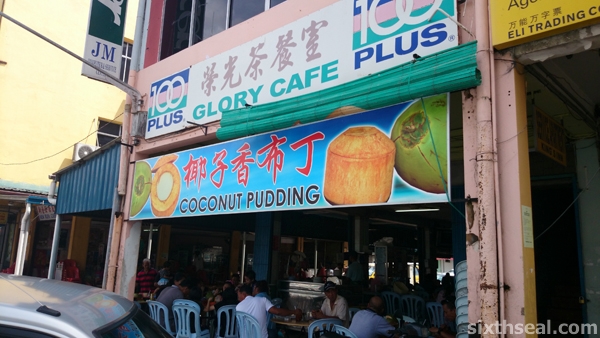 The first time I went, I was so taken by their take on the big prawn noodles that I wrote a glowing review. Strange thing was, the owners actually took notice and printed out my blog post and pasted it on their stall. Thus, the next time I went, they actually served me a complimentary bowl of their tom yam big prawn noodles for the early exposure! 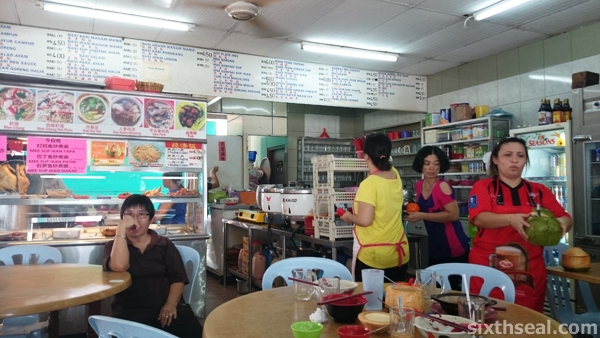 I drove down to Sarikei to show my better half and my dad what this storm in a teacup bowl is all about over the weekend. We just had lunch and wasn’t sure what time Glory Cafe closes so it’s a good thing Joyce got us the number and I called ahead. It used to be cheaper than the notoriously priced RM 35 big prawn noodles in Sibu so people in the know started coming here but it’s now almost the same price. 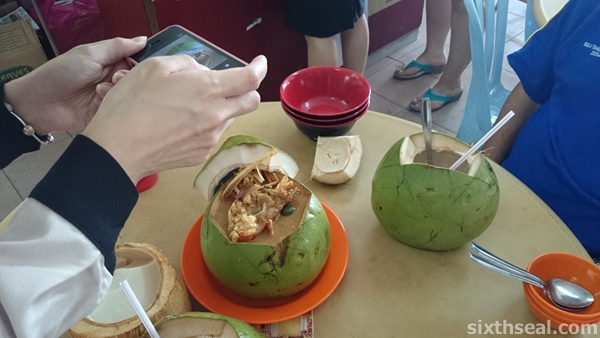 The Coconut Tom Yam Big Prawn Noodles here tastes a lot better though! They still serve the old version in a bowl instead of inside a coconut but the new coconut variant is better. The updated recipe is actually very sweet and I asked what the difference was – it turns out that they actually use coconut juice instead of water to make the tom yam soup for the big prawn noodles! 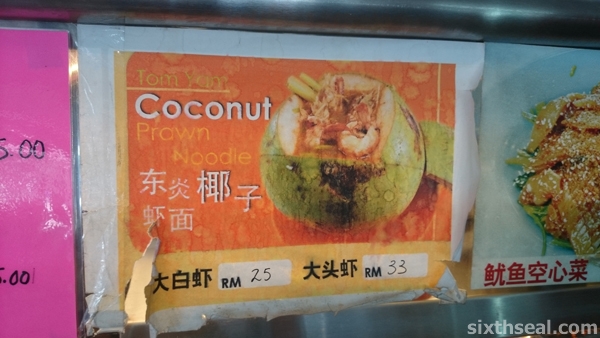 There are two different options for prawns/shrimp – RM 25 for a coconut bowl of big white prawn (Litopenaeus vannamei) and RM 33 for the larger giant freshwater prawn (Macrobrachium rosenbergii). The latter is actually cheaper in Sarikei coz it’s closer to the source and it’s what people here call da tou xia (大头虾) or big head prawn. We went for the latter since it tastes a lot better and it’s the traditional prawn to go into big prawn noodles. 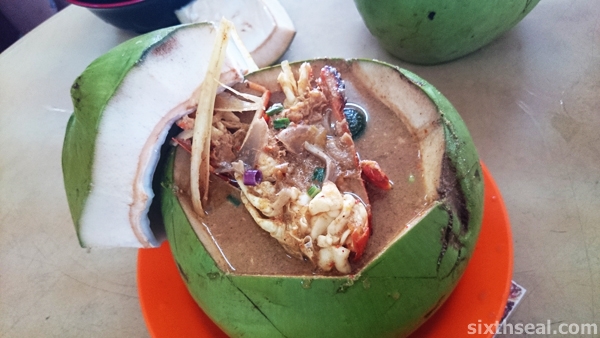 It’s absolutely delicious! My dad was still full so me and my dear shared a coconut bowl of the tom yam big prawn noodles. There’s actually not a lot since the volume inside of a coconut is rather small (the husk makes up a large mass of the actual coconut) but it’s the perfect serving for one. 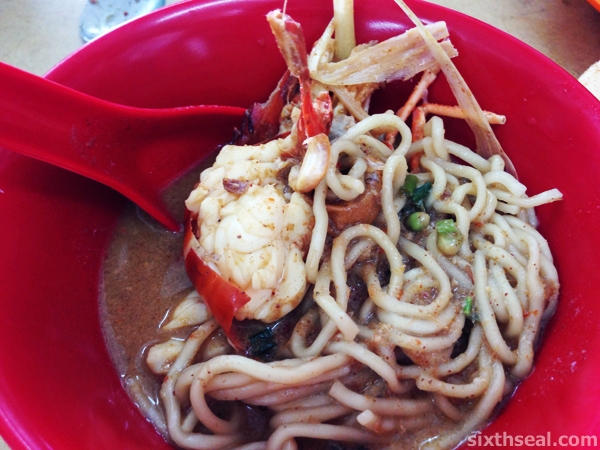 There’s one large big head prawn inside split into four and about a fistful of noodles but it tastes soooo good – the broth is spicy and savory and sour and sweet at the same time, this really hits all the notes. I wished we ordered a coconut bowl each but that would be too much since we just ate lunch. 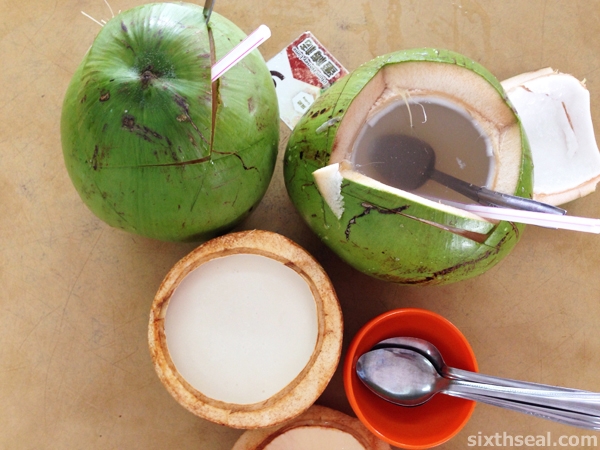 We also ordered coconuts for drinks (RM 3.50 each) and my dear tried their new homemade coconut pudding (RM 6). The coconut pudding is very popular – almost every table ordered it, and we wanted to check it out too. It’s made in-house with coconut milk and coconut juice and it’s not the same thing as the coconut jelly that we have in KL and Thailand. It’s sweet and the perfect counter-balance for the tom yam big prawn noodles. 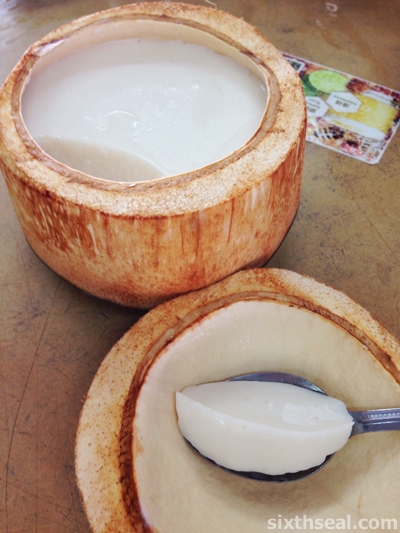 The tao geh nio gave me a strange look when I paid the bill and she said I looked familiar and I told her about how I used to make the hour long drive down just to eat their noodles and wrote the original review they printed out six years ago. Haha. This is a relatively new dish – it was just launched last year so if you haven’t been back in a while, I would highly recommend Glory Cafe’s Coconut Tom Yam Big Prawn Noodles. 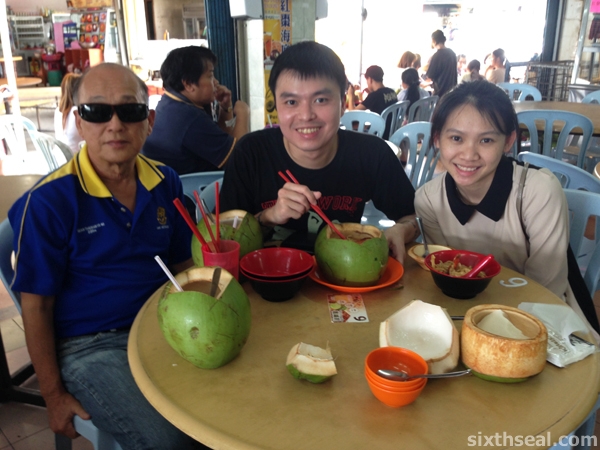 It’s definitely worth the time to drive down but keep in mind that they’re very full during weekends and the last order is before 4 pm.