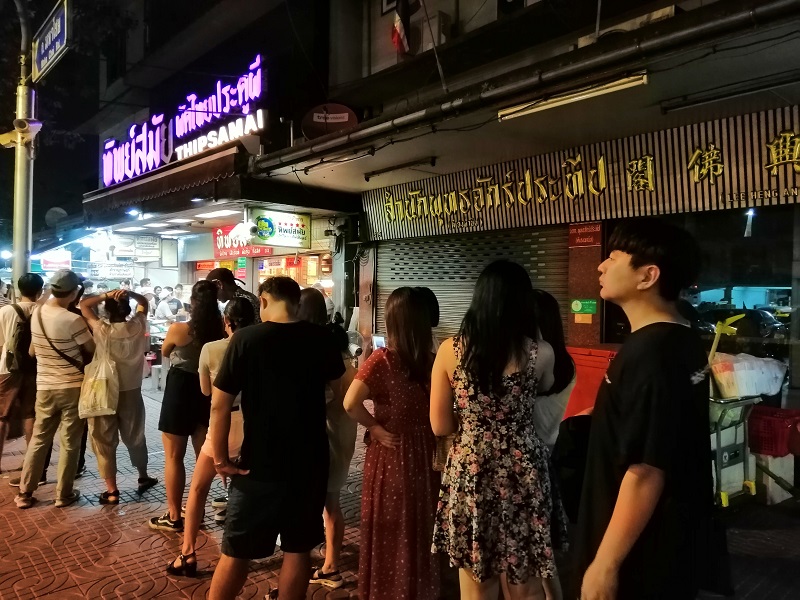 Thipsamai is a Bangkok institution that serves up pad thai in a huge multi-room sprawling empire in Pratuphee. There is a long queue snaking out the front every single night. The army of chefs work fast though so the line moves relatively quickly. They’ve recently been honored in the Michelin Bib Gourmand listings and I decided to check them out after my visit to Raan Jay Fai. 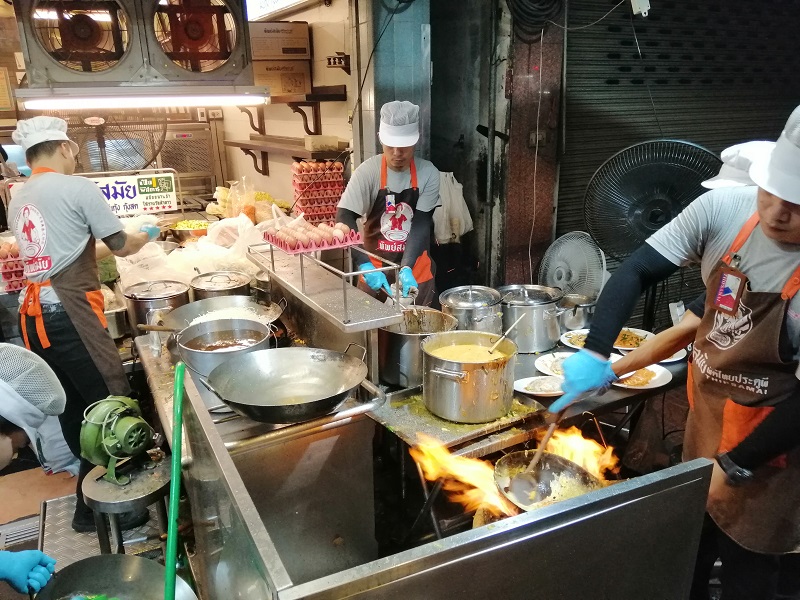 I had eaten at Elvis Suki, Raan Jay Fai and Tongue Fun ice cream in the past 3 hours so I was quite full. Fortunately, Thipsamai has a gift shop inside their restaurant that carries complete, ready-to-cook versions of their famous pad thai! Enterprising bastards! I decided to forgo eating there and get some packs to bring home instead. I also bought one of their branded plates and glasses so I could replicate the meal at home. At least, that’s what I told myself but I really wanted souvenirs too. 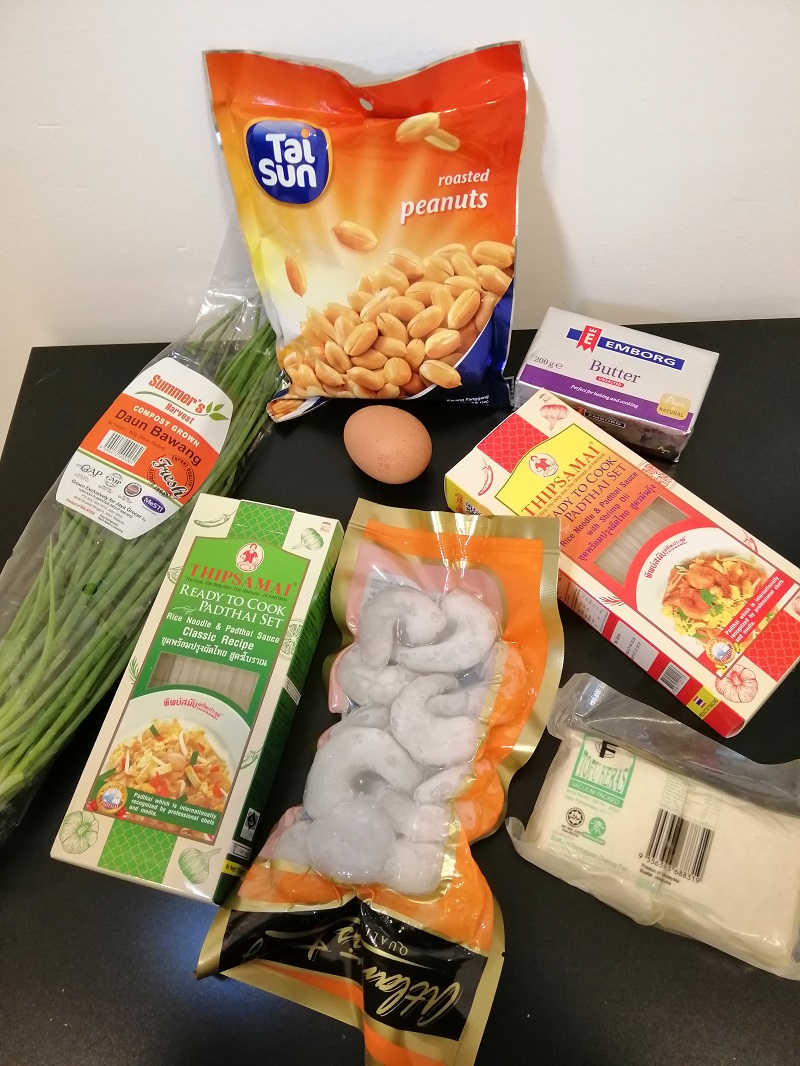 For my first attempt, I armed myself with large prawns (can’t have pad thai without shrimp), roasted peanuts (which I crushed), spring onions, firm tofu, egg and butter. I used the regular green version (the red one has shrimp oil). The packaging said to fry the dry pad thai noodles in oil till soft before mixing the sauce packet with an equal amount of water and pouring it in. 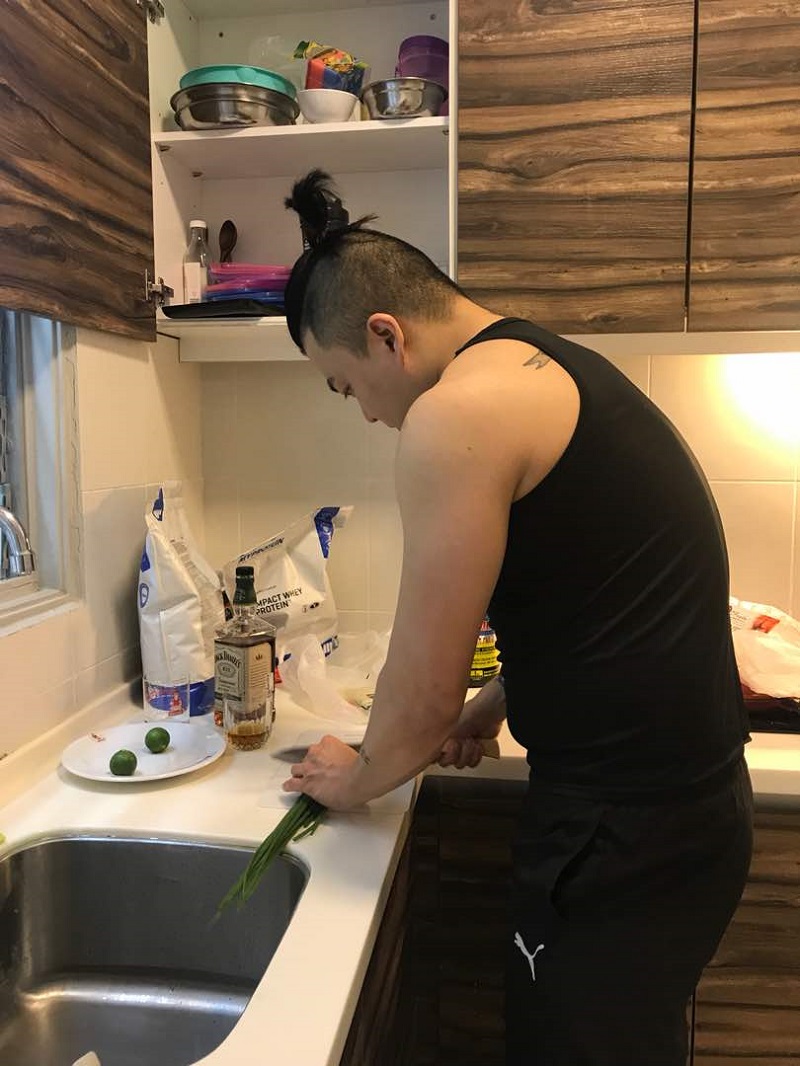 I thought it was a bit unusual to fry dehydrated noodles with butter without rehydrating them first but it works! 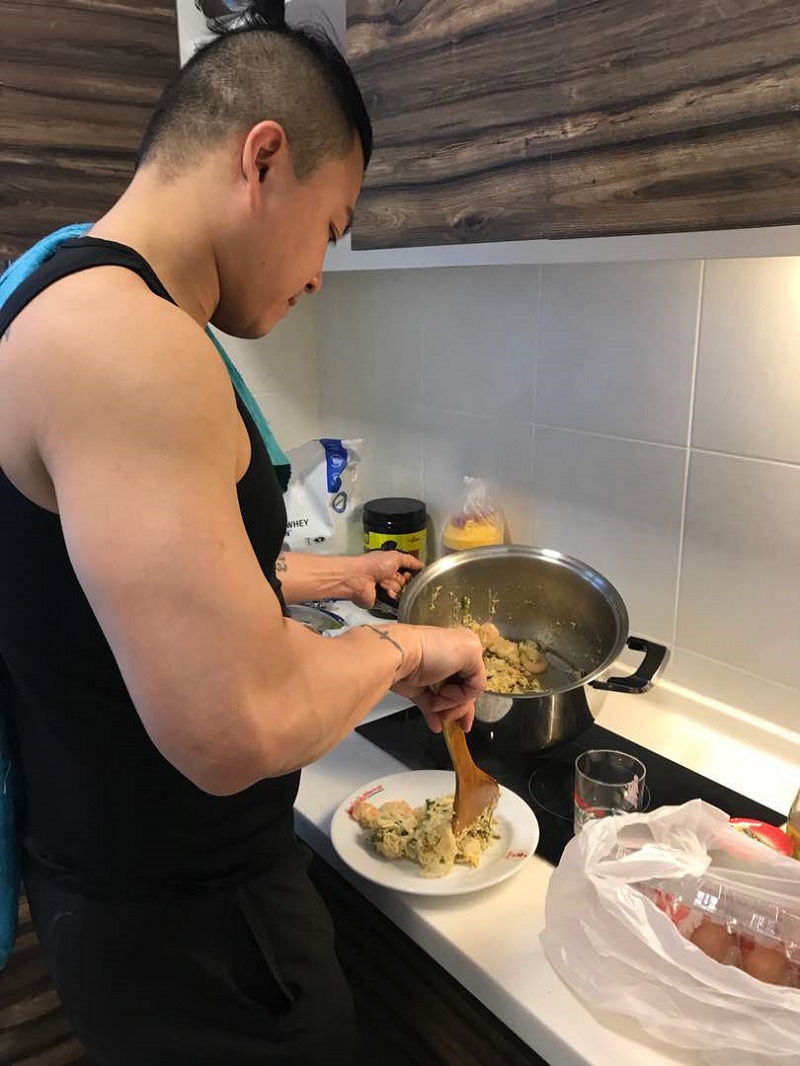 Here’s another photo of me doing domestic things while wearing a stringer that shows off my muscles for your viewing pleasure. 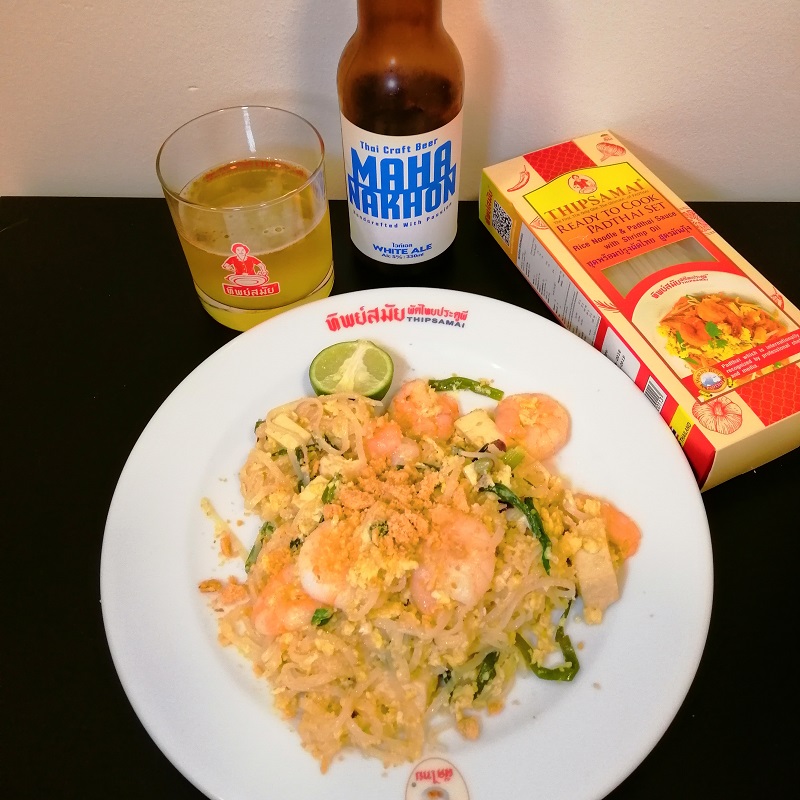 I paired it with a Maha Nakhon bottled beer I painstakingly brought back from Bangkok. This was the only one that survived. Another Cheers can exploded in mid-air from the air pressure differential and soaked all my packed clothes. The pad thai was decent but I felt like it could be improved. 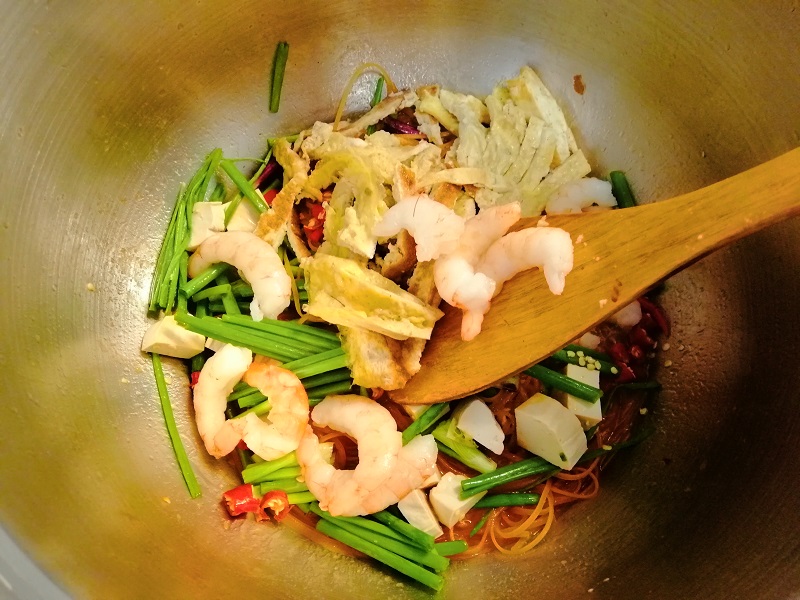 Thus, I refined my processes during my second try a week later. I used the red Thipsamai pad thai box with shrimp oil this time. I also bought bean sprouts (which I forgot the first time around) and Thai bird eye chillis. I fried the eggs first in a separate frying pan and made a flat omelet that I sliced into strips before adding it during the final stir. I also cracked in a raw egg to help things bind together. 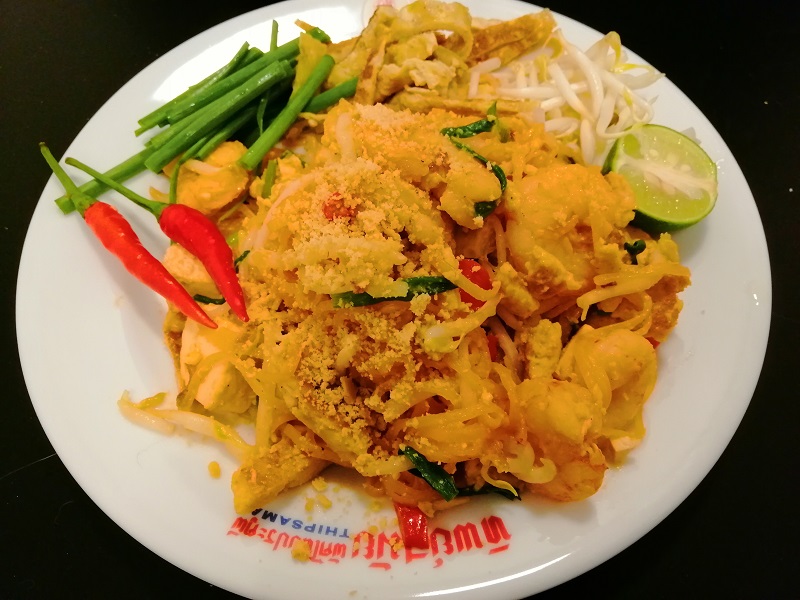 I threw in half of the bean sprouts, omelet, Thai chilli and spring onions and used the other half as a raw garnish so it remains crunchy. I also had a squeeze of lime and crushed peanuts as a topping. This version is insanely delicious! I love the combination of sweet notes from the peanuts and butter, the salty overtones from the pad thai sauce, the raw elements in the bean sprouts and spring onions, followed by a nice kick from the Thai chillies. I’ll rate it 10/10 if I’m allowed to rate my own cooking. 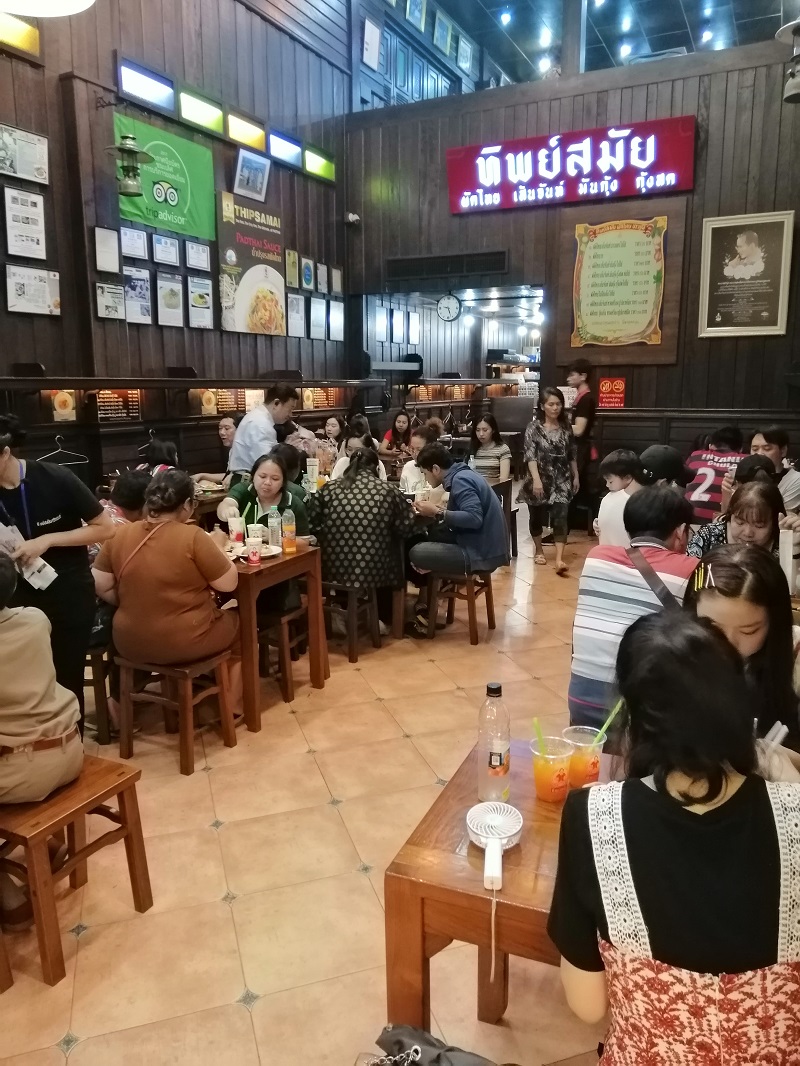 I respect how Thipsamai pad thai leverages on their success by selling branded food and souvenirs. I’m all about resourceful minds and I enjoy food related souvenirs. That’s the only type of souvenir I buy. I got one of their vintage fridge magnets to put on my fridge and their Thipsamai plate and glass (same as the ones they use in-house) has been one of my favorite crockery for plating. I’ll be sure to revisit when I’m in Bangkok again to see how my own take on their ready-to-cook pad thai compares with the restaurant version.