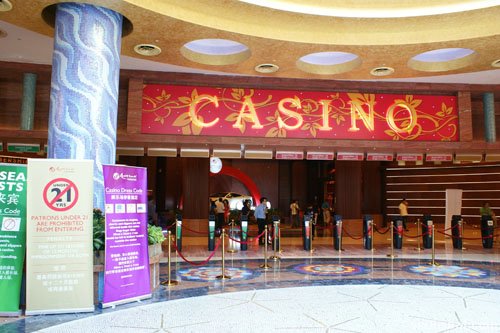 Dammit! I popped out of Universal Studios for a quick smoke (you get a UV chop for reentry) and the casino was just beside it. I had told myself:

DO NOT STEP INTO IT

last night. I passed by it on my way in but never thought about going in. It had an:

…but I succumbed. *hangs head

I wanted a mere SGD 100 win – just one bet at the Baccarat table – that was how modest I was vs my 5 figure bets last time. I just exchanged SGD 200 for chips.

Thus, I put SGD 100 on a hot table where everyone else had their chips on Player as well, and also on Tie. I had a STRONG URGE to move it to Banker to ruin everyone’s mojo but I didn’t. I also wanted to bet on Tie since in my last sojourn to the casino it came out as a Tie the first time…but I didn’t.

Round 2:
Banker wins with a fucking natural nine (Ace, 9)
Everyone was still on Player – literally thousands on the Player side and when the Tie came I had an EVEN STRONGER URGE to move my chips to Banker.

This would have ended in a happily ever after story with a small SGD 100 win (my aim) if that had been the case. It wasn’t.

I moved to another table since there’s this dude exchanging money and I wanted to be fast.

Round 3:
I told myself, don’t let the pitfalls of being attached to Player dictate your bets. I didn’t listen. I bet on Player.
Banker Wins.

Round 3:
I put SGD 200 on Player despite it being an obvious Banker dragon (roll) on the table.
Player came out with a 7, which I thought was pretty safe, considering Banker only had a 3.
Banker drew again for an 8.
FML.

Considering I only brought SGD 300 over and I lost SGD 400 (which is technically SGD 200 if you recall that I won SGD 200 in Marina Bay Sands casino) I didn’t have any more money to bet since I used some money for topping up taxi fares, drinks at Ku De Ta and a souvenir at Battlestar Galactica.

I shouldn’t have gone in. I told myself the SGD 200 win at Marina Bay Sands casino was good enough but I went through that door anyway. I lost SGD 400 (about RM 1,000) in the process. It took just 10 minutes to lose that.

It seems that I’m cursed in Genting casinos. :p

I’m totally broke now and it’s all my fault. T_T

Oh well, at least they checked my age to verify that I was above 21. Small consolation. 😡

You know how chaos theory goes right? Anyway, being broke is no fun, but looking back, if I didn’t lose in the casino, I wouldn’t have gotten a text message from an old friend (13 years since we first met).

It was technically two text messages and a phone call but it totally made my day. I mean, seriously, it’s damn worth it if chaos theory deems that must happen for this to happen. Heh!

Thank you for making my day. You know who you are. I still can’t wipe this stupid grin off my face.