On my way back from Caulfield, I saw this guy riding a scooter. Not the motorbike kind of
scooter but one of those kick scooters. The kind that looks like the bastard son of a skateboard
and a toilet mop. Anyway, the thing is, this thing was motorized. I’ve never seen those things
before, and it seems to go pretty fast. The shuttle I’m on is moving at around 80km/h and I’ll say
that from my point of reference, the motorized scooter is doing around 20km/h. That guy was riding
on the highway! I wonder what will happen if someone riding a scooter gets involved in a collision
with another vehicle. Are the fuel tanks protected for that eventuality?

My mate Daniel passed along a link to SpinJunction,
which is a Singapore run website hosting a couple of music videos and,
get this…the whole 26 episode series Angelic Layer! I’ve only watched
up to Episode 14, so seeing this link so close to finals week
is…disturbing to say the least.
Must…stop…myself…from…anime…marathon…

Tenshi no tsubasa yo! Hmph…she probably raped my grandfather. 🙂

Picture nicked from the official website of Angelic Layer.

P/S – Don’t bother downloading unless you’re on a broadband
connection coz they don’t allow download managers. I can only get
around 30kbps sustained, but you can thread as many downloads as you
like. I managed to grab episodes 14-26 in an hour (each episode around
180 MB) with simultaneous downloads. It only requires a quick
registration.

No one can beat my sweet exam timetable! 🙂 It’s perfect! The Monash University exam period is
from 10/06/2002 – 28/06/2002. My tabletable allows me to finish everything in just 4 days instead
of dragging it over a period of nearly a month. Just the way I like it, baby. Plus, this gives me
more than 4 weeks of holidays! wh00t! =D

I have a piece of advice for everyone. When you put important stuff like assignments on a floppy
disk, make sure to make two copies or use a web mailing service to mail yourself a copy. I had an
assignment due at 2 pm and thus I took the 1:40 pm shuttle to my campus to print it out. Yes, you
know what’s coming. I didn’t realize it at first. I was thinking, hmm…my document is taking a
long time to load. But that nasty grinding sound tipped me off. I tried using another computer in
the hope that the first one’s floppy disk drive is somehow faulty. Nope…it didn’t load there
too.

Anyway, I signed the pink CSSE declaration forms, handed them to Franky (my assignment partner),
took the 2:40 pm shuttle back to Clayton, ran from the bus loop to the halls in 7 minutes (a
personal record!) and burst into my room to send the stuff to Franky, who printed it out and handed
it in coz I couldn’t get back in time. Oh, and much thanks to Franky for the kang tau. 😉

What’s the moral of this story? Don’t copy that floppy.

I bought this pack of bananas in a temporary lapse of judgment about one week ago. I still
haven’t eaten more than a couple in the meantime. Bananas (the candy kind) are not nice to eat.
It’s hard and crusty and dry. I like the soft jelly type candies, so I don’t even know why I got
these. Must be those voices in my head again. 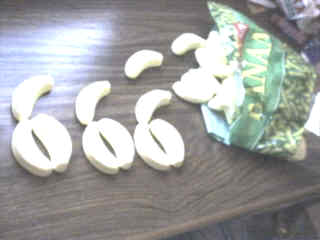 Proof that candy bananas are evil:

Here is wisdom. Let him that hath understanding count the number
of the beast: for it is the number of a man; and his number is Six hundred threescore and
six.

I had an REM heavy sleep last night. Lots of weird ass dreams, the only one of which I remember
is aiming my webcam down at the mound. There was a lunch thing going on, which two tables and
people sitting around like the Mad Hatter’s Tea Party. They were beckoning me to come down and join
them but I said I have too much stuff to do so I couldn’t. Hmm…this must be the manifestation of
my guilt for not fixing the webcam this weekend as promised. =D

Oh, I was going to update this page about me going to Clayton but I just went off on a tangent
and went on about my recurring dreams instead. 🙂 Anyway, I had that new Tandoori Chicken Burger at
McDonald’s. The one on their New Tastes Menu. It’s
pretty good, the curry balances well with the sour cream. Heh, I’m talking like its a gourmet
meal instead of McDonalds. Oh well, hunger is the best condiment. Eh, I don’t think I got the
phrase right, but never mind. 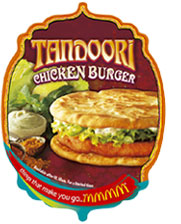 Hmm, sometimes I just get this weird feeling of deja vu. I was loading up this page in my HTML
editor when I felt that I’ve done this before. It made me think of something bad – my recurring
dreams, of which I have three.

Dream #1: Starts with me looking out the window of my old place in Kuching and seeing this huge
mountain with an old library made of large books in the middle. Its literally made of large books,
like one large book for each of the sides and the top. I am always 7 in my dreams. There was an old
custodian inside who told me I need to walk up to the building at the summit for some reason. Now
this was night time, and there was no one around, except for the custodian and he disappeared after
I talked to him too. And until today, I still don’t know what’s on the summit, I can’t even see the
summit structure in my dreams.

Dream #2: I got locked in the Emporium (?) in Kuching when they closed for the night, you know,
that old place opposite the MAS building in town. I am feeling scared coz I was around 7 in my
dream and I had to to walk up to the highest floor where they keep the toys. I just HAD to, it was
a compulsion and I can’t stop the flow, even though I KNOW what’s up there and it’s not something I
want to see. My feet just started walking up and I rounded the last flight of stairs and the door
was open and I can see it, and I always wake up then. The thing that was waiting for me is a large
doll, the ones little girls play with, with blond hair, eyes that shuts when you put them down, etc
but this one was alive and laughing, a creepy laugh. And it wasn’t in it’s package, it was just
sitting there on the shelf.

Dream #3: I am in my Kuching place and this one was when I was 7 too. I kept an aging formula
in the fridge, you’ve seen this stuff in movies, its the type that makes you age instantaneously
until death once you drink it. I walked into the kitchen, and there I saw my mom chopping meat and
my mom was old, really old with a beard and stuff. I asked her in horror, did you drink that stuff
in the fridge? And she replied yeah, there is nothing that can be done now. She said she was going
to wash some clothes and when I followed her into the bathroom I saw only her hand there, it was
chopped off but in the dream I didn’t think that someone had chopped of her hand but that she’s
gone and only her hand is left.

Frankly, all three of the dreams disturbs me. There are two things in common in those dreams,
I’m always around 7 years old and its always in Kuching.

The halls proxy server goes down something like once a week? WTF? Is it too much to ask that a
reasonable quality of service is provided? This is a Uni for Christ’s sake. Get your fucking act
together. Fuh…this is how I feel about you guys.

at the Roberts Hall shop. I saw that when I went to get a diet coke just now. But go quickly,
because there are only a couple left. The reason there are giving them out is because the use by
date is today: 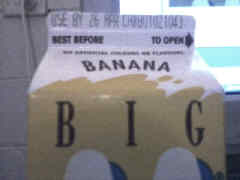 Best Before: 26th of April