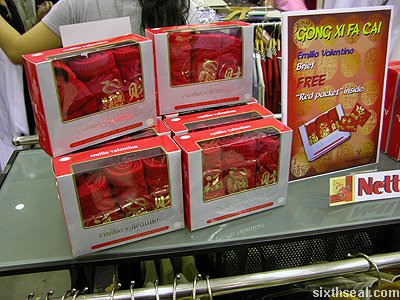 I was out with a couple of friends and we chanced upon these bright
red underwear for sale – it’s meant for Chinese New Year. It was quite
popular too, as quite a few people were looking at it. We were doing
that too, when a sales person came up and asked us what size I was. I
told her I didn’t know, and we discussed about the merits of having a
loose versus tight fit. ;) 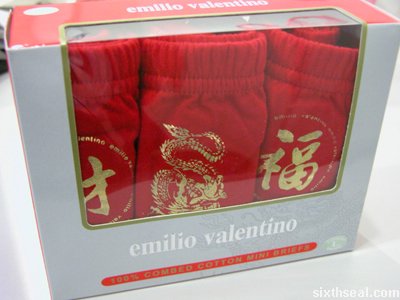 We all bought one box of the red underwears each. I didn’t have time
to have a detailed look at them last night. Besides, I can’t read
Chinese. Thus, I brought them to the office this morning and got them
translated. 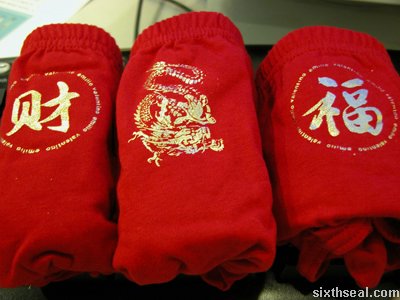 The Emilio Valentino 100% combed cotton briefs comes in a set of
three. I bought the L sized ones, while one of my friends went for the
M and the other had to go for XL. 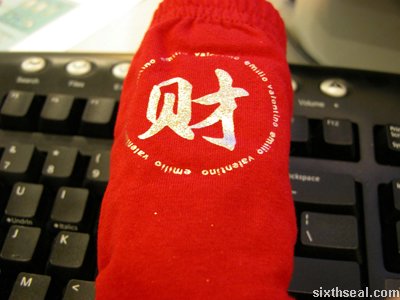 One of them has the Chinese character Chai meaning
Prosperity emblazoned in gold across the bright red underwear. This
interplay of color is supposed to be very auspicious – the red, a
traditional color of the Lunar New Year celebrations for the Chinese,
combined with gold, which symbolizes wealth, comes together to make on
hell of a prosperous brief.
You’ll want to be wearing these when you’re gambling.
Sure win one! 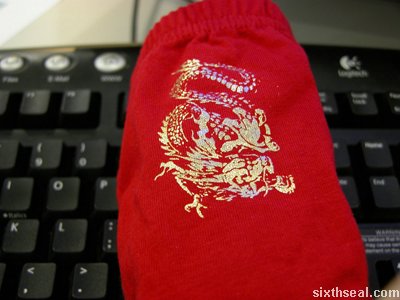 The other has an image of a dragon, presumably to symbolize the “dragon” that lies under the bulge when one is wearing it. 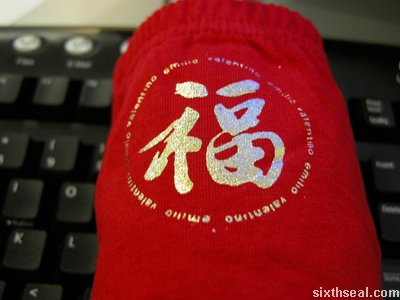 The third and last one has the gold Chinese character for Fu,
which roughly translates to happiness, in the family context. It’s
probably wise to be donning these on during the Chinese New Year eve
reunion dinner to avoid unwanted questions and stop bickering relatives
(if any). 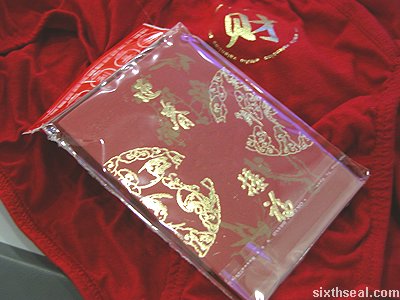 So there you go – the complete package for Chinese New Year.
Prosperity for gambling sessions, dragon for you-know-what sessions,
and happiness/unity for the reunion dinner. All bases covered. 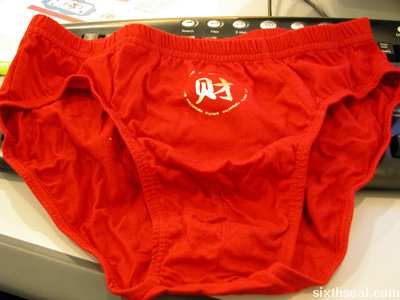 Don’t forget to tell me in advance if you want to set up the
traditional Chinese New Year gambling session…I’ll be donning this Chai brief on the outside. I’ll be letting it all hang out. ;)