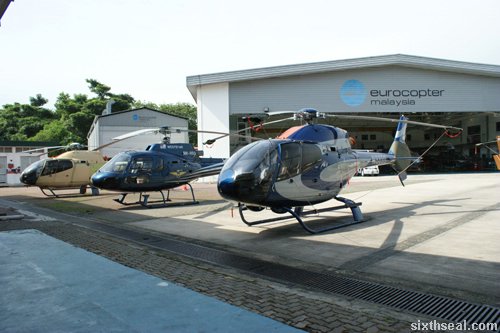 I was invited for a helicopter ride by the great (crate?) people at Heineken on Saturday. The scheduled takeoff was at 11 am at Eurocopter in Subang Airport with a briefing at 10:30 am. The helicopter experience is a prize for the people who participated in the Crate Expectations (sorry for the lame pun above) online game by Heineken. 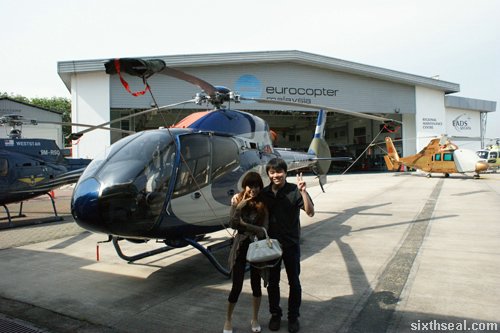 I left early to pick up Rin coz she has misgivings about my navigation skillz. The two contest winners arrived soon after us. Cheesie and I didn’t win the game but we were invited to experience the helicopter ride anyway. Cheers Heineken! OMG! There are so many bad puns in here. 😉 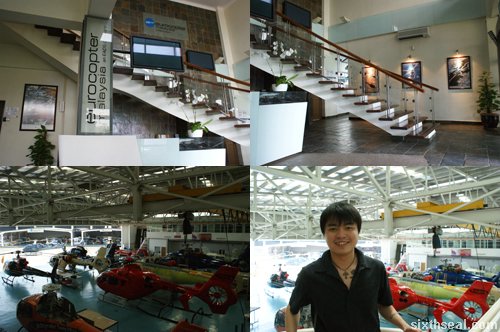 Anyway, after driving into the Eurocopter car park, we were recognized by the liaison there for the 11 am takeoff and brought into the secure hangar. I was half afraid they’re going to ask for my MyKad or driver’s license coz I neglected to bring both. 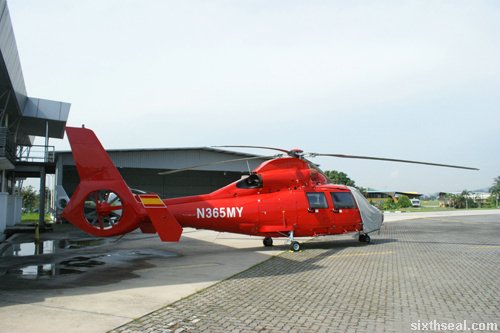 The Eurocopter hangar houses an impressive fleet of helicopters – there’s even one used by the Ferrari team during the F1 season. We were given a tour of the hangar and introduced to the different helicopters there. 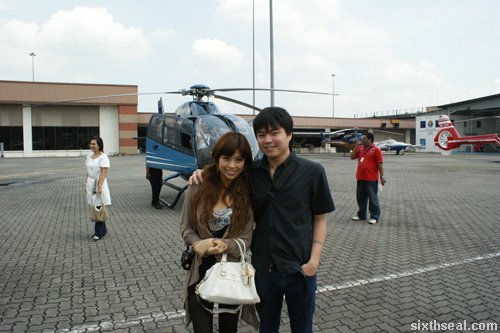 The helicopters can be rented – the liaison told us a heartwarming story about a guy who proposed to his girlfriend by hanging a huge “Will You Marry Me?” banner on some building and getting down on bended knee on the helicopter when they panned over the building. 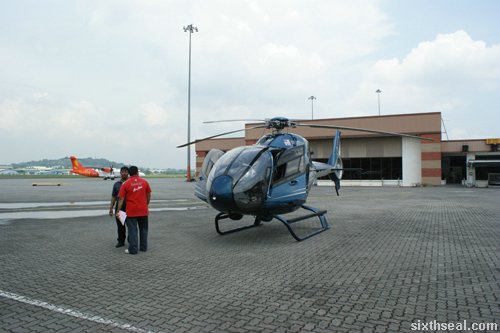 We had to wait for the engineer to come (his car broke down) so our flight was delayed for about an hour or so. The pilot cannot take off without the safety engineer’s green light – a very good safety precaution. 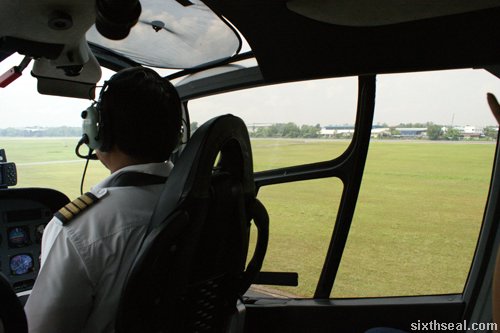 Thus, after a short wait…we got on the helicopter, buckled up and put on the on board communications device (the technical term for this is “headphones”). 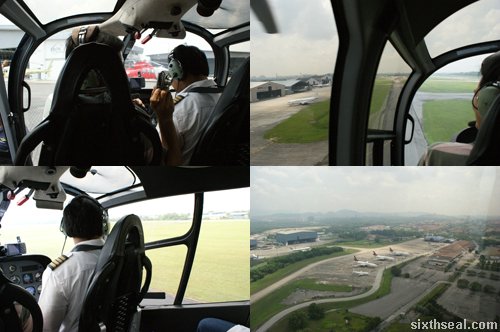 The pilot got the helicopter started up… 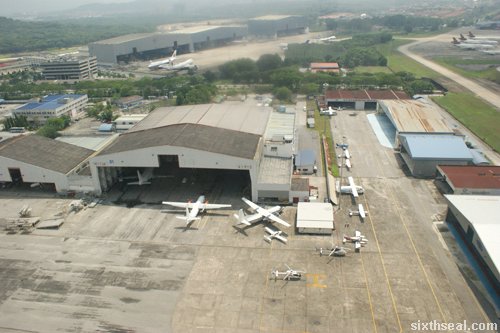 Cue Ride of the Valkyries. 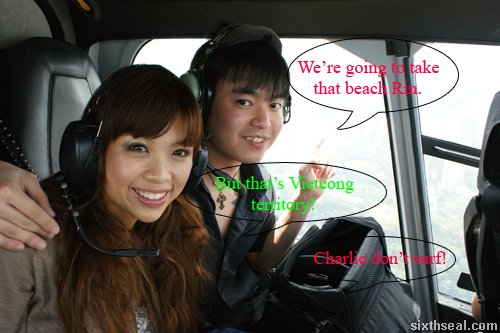 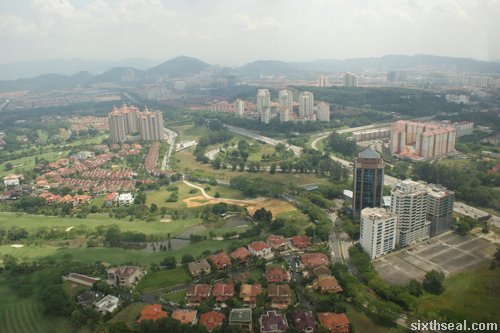 It’s a great feeling to be on a vertical takeoff aircraft. The flexibility of the HH-65 Dolphin is impressive. We flew over Subang… 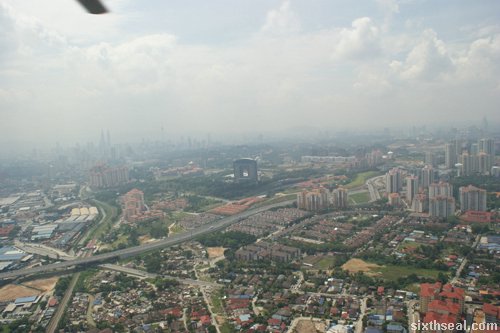 …PJ (I can see you taking a shower in your house with my l33t zoom lens :p) 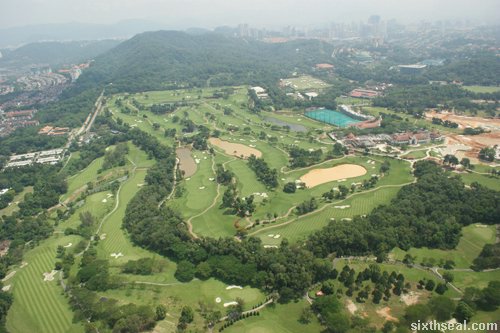 …and onwards to KL city. 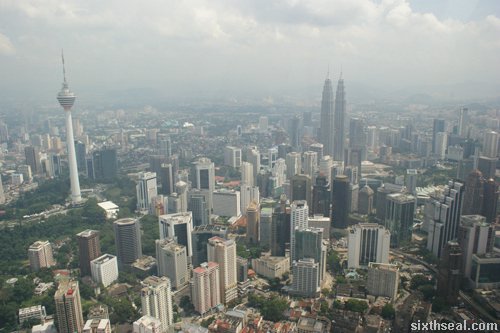 The pilot circled the KL Twin Towers and other landmarks in the city, giving us a lot of photo ops. 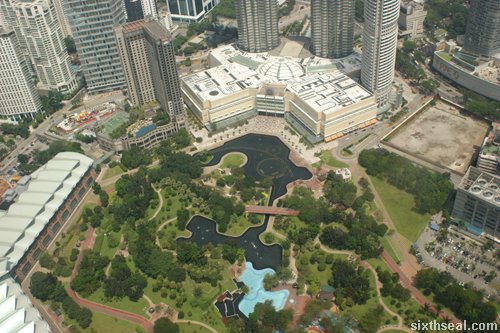 I could see mini people playing in the splash pool outside KLCC. I think we were hovering at about 1,000 feet.

Check out the KLCC Flyover video! 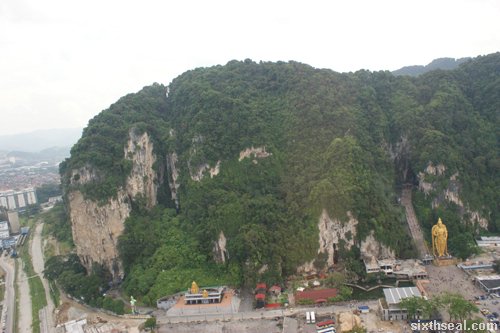 We headed off to Batu Caves after that and did a flyby of the limestone hill. It’s the most famous Hindu shrine in Malaysia, with temples inside the caves. I’ve been there once during Thaipusam and it’s great to have a bird’s eye view of the place. 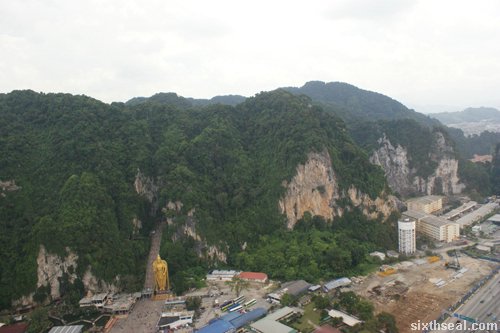 I also managed to snap a photo of the huge Lord Murugan statue standing guard outside the cave network. 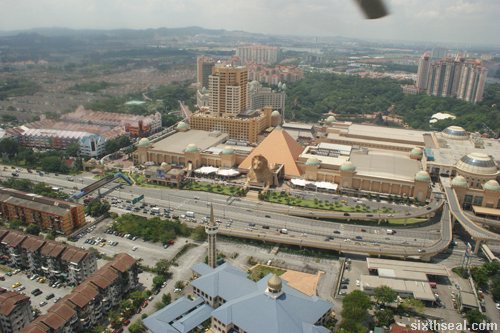 On to more secular sightings, we flew over Sunway Pyramid. Hmm…religious imagery on a shopping mall – right after the real thing. How ironic. 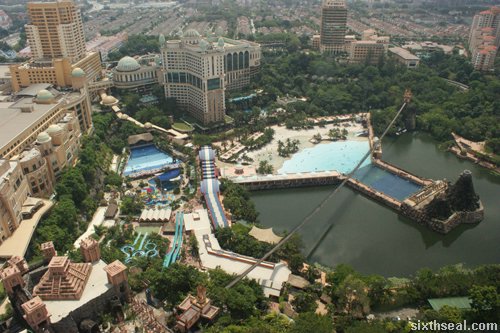 Sunway Lagoon from above looks smaller than the actual water theme park. 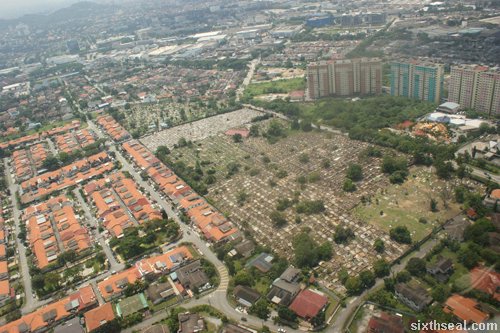 I also managed to capture a photo of a rather large cemetery. I like cemeteries. I have a morbid fascination with death. 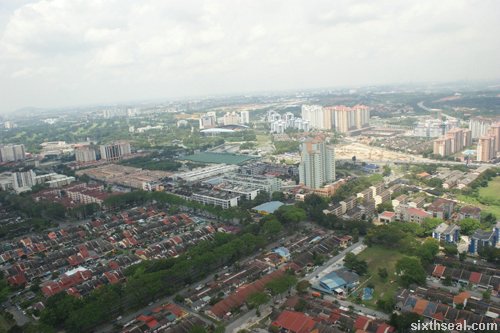 Cheesie got all excited when she spotted her condo and I managed to spot mine too. No, that’s not a picture of either of our humble abodes. Security reasons, ya know. 😉 However, this is where I work. You can probably see me slaving in a cubicle if you squint hard enough. Seriously. It’s Kelana Jaya. 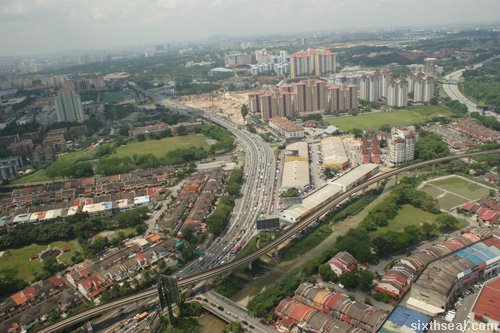 I can see that the inbound traffic to KL was pretty congested last Saturday. I saw you (yes, you) stuck in traffic while I’m soaring above. 😉 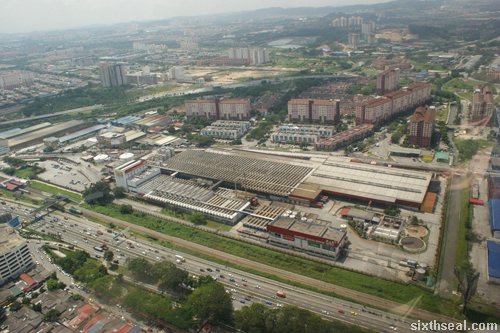 I suspect that there was an intentional flyover of the GAB factory where we had dinner and drinks at The Tavern last month. I’m kidding, the place is on the way back to Subang Airport as the crow flies. 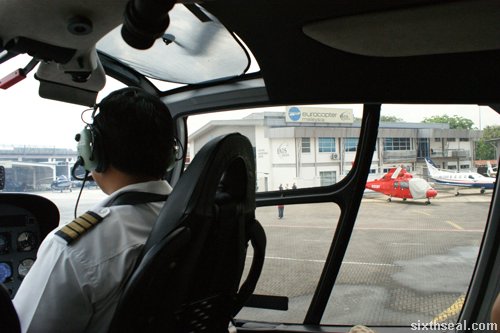 It was an awesome experience. Flying over KL and the outskirts of the city on a helicopter is certainly an episode that I won’t forget. The roar of the rotors, the chatter of air traffic, the feeling of being suspended in the air – it’s amazing! 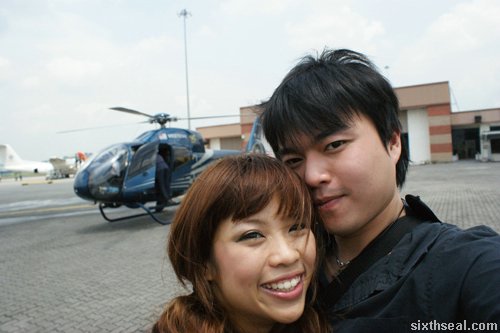 Cheers to Heineken and Nuffnang for the invite!

63 thoughts on “Ride of the Valkyries”