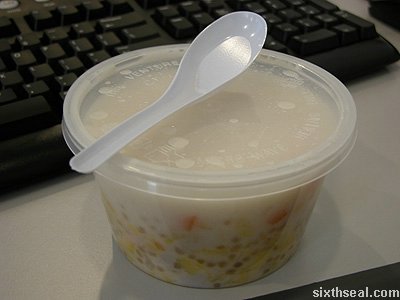 Here’s a takeaway container of bubur cha-cha I got off a small stall
off the roadside for lunch today. Bubur cha-cha literally means mixed
porridge. It retails for RM 2. 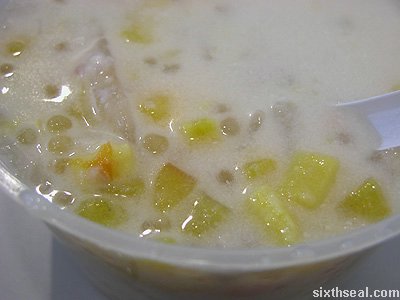 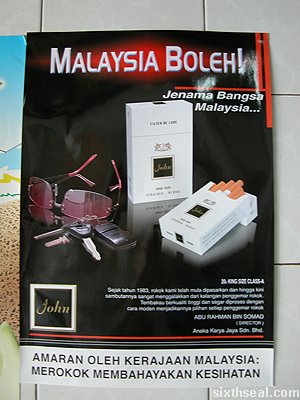 Malaysia Boleh! Jenama Bangsa Malaysia (The Brand of the People of
Malaysia). This is a relatively new entry into the cigarette market –
John cigarettes. 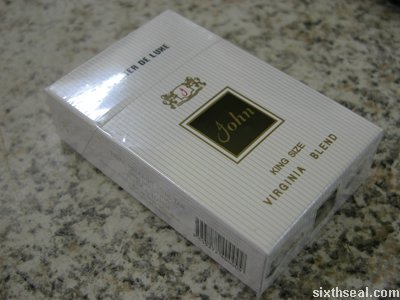 I found it in a coffee shop somewhere. It’s wholly made and owned by
a Malaysian Company. I just hope Phillip Morris don’t file a lawsuit
based on the er…similarities, shall we say, with their respective logos. 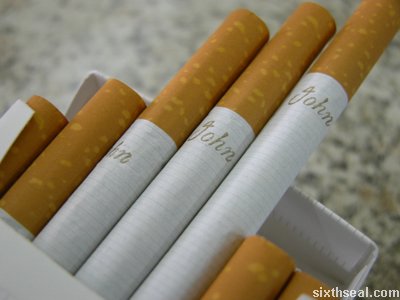 It currently only comes in one variety, no menthols, no lights, but
that’s not an issue since I don’t go for those. It only costs RM 2.80,
around half the price of “premium” cigarettes like Marlboro and Dunhill. 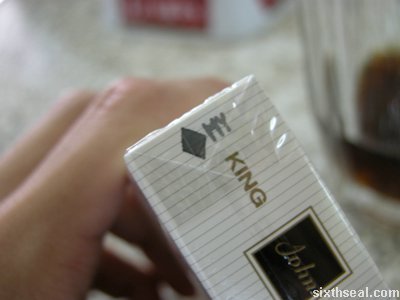 It has the “MY” silk print on it – Malaysia recently launched a
campaign to get rid of all unlicenced cigarettes by imposing fines on
both retailers and end users and this affected the low income bracket
market by removing low cost cigarettes like Rave from the shelves.

It looks like that void is filled now, with these Malaysian made
cigarettes. I personally found it pleasant, somewhat like
Marlboros…for half the price. Two other test subjects reported
“sharpness” and an “acidity”, respectively, which I also noted, but
hey, it costs half the price of Marlboros. I think I’ll stick to
Marlboros though, but I’m just telling you, if you’re not choosy, you
might like John cigarettes.

…and er, support Malaysian made goods. 😉 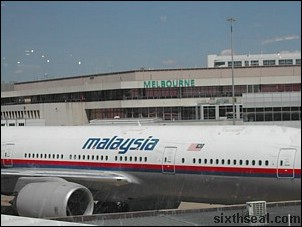 I’m absolutely beat. I only got 4 hours of sleep on Saturday night
to make time for packing my stuff and I moved 12 (!) bags of stuff to
the common room for storage on Sunday morning. I took the Skybus to the
airport and got there 1 hour before the departure time. I quickly
checked in my bag (I only had one) and grabbed a bite to eat at Burger
King before going to the gate just as the last few stragglers were
boarding the plane. Phew.

The flight to KL was okay but my ass felt like…well, ass.
My tail bone area was really sore from sitting too much. Does anyone
else have this problem on long flights? I wonder if it’s my bad posture
(I slouch too much) or coz my ass padding is too thin. Perhaps it’s
because I can’t seem to relax my ass muscles? Perhaps the word ass is
used too much in this post too. Moving on.
Anyway, I got a window seat and there was this 50 year old guy beside
me who played Bejeweled! on the personal screen all through the flight!
Seriously, it was a 10 hour flight and he was playing it all the while.
Man, that’s so hardcore. What an OG. He only stopped for toilet breaks
and when food was served. Whoa…that’s pretty impressive. 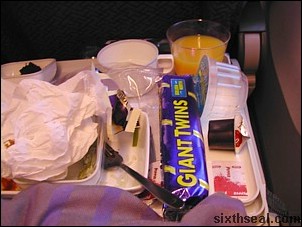 I scream, you scream, we all scream for ice cream

Another thing of note is that MAS’s food budget seems to have been
increased. There are chocolates served with every meal now. This seems
to be the standard in all meal serving MAS flights because I got a
chocolate on my KL – Kuching flight too. The chocolate on the Melbourne
– KL is a Top Deck bar and the KL – Kuching one is a Kit Kat. They were
also serving big ass bars of ice cream (!) on the Melbourne – KL flight
too. Not with the meals though, it was served the way they serve
peanuts – passed around in a tray. When I say big ass, it really is
big. It was a 750 mL bar, if I’m not mistaken. Nice. Being the greedy
sort, I had two, but I nearly couldn’t finish the second one.
Apparently, there is such a thing as too much ice cream.

Oh, and I spilled 7-up on myself during the flight too. If you’ve been reading my blog for a while, you’ll have remembered me spilling orange juice on the guy next to me
[monash.edu.au] on the KL – Melbourne flight last semester. 🙂 Now I
know how that felt. Heh. I was holding a cup filled with 7-up when I
decided that now was good idea to drift off to sleep. Next thing I
knew, I was holding an empty cup and I had a not entirely pleasant
dampness near my groin area. I tried to do some damage control by
attempting to soak up the 7-up with the wool blanket they provide, but
as you know, wool is not known for its absorbency. The cabin crew was
oblivious to my pages too, there was only 1 working this entire aisle
and he was preparing food. In a fit of improvisation, I used the pillow
they provide to soak the 7-up up. That worked nicely, but I won’t go
into the looks I got from people watching me rubbing my genital area
with a woolen blanket. I’m not sure what they were thinking, but I
didn’t think they saw me spill my drink from the looks on their faces.
My apologies to anyone who got a pillow smelling vaguely of 7-up these
couple of days. I don’t think they wash those things before reusing
them.

Anyway, I got a shock towards the end of the flight when I checked
Channel 12 (the real time flight update channel) and saw that we had
only just passed Alice Springs and still had nearly 6 hours to go! My
jaw literally dropped and my ass cried at the thought of having to
endure another 6 hours. It was a total WTF?!?!? moment. I reckon we
just had another 2 hours max to go. Luckily one of the cabin crew
caught my totally flabbergasted look and told me that the channel is
not working. Man, what a relief! Not just for my ass, for me too, I was
beat from only getting 4 hours of sleep the previous night and having
to move 12 heavy luggage’s to the common room (about 400 meters and 4
flights of stairs from my room). 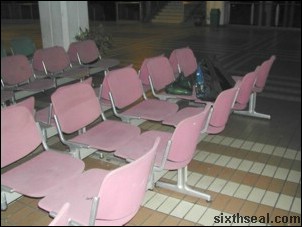 Anyway, I arrived at KLIA at around 8:30 pm and went to the domestic
terminal to catch my Kuching flight. The flight was delayed, but it
didn’t matter to me coz I didn’t have a connecting flight to catch
until the next morning. Anyway, I reached Kuching at 12:45 am and
wanted to get some sleep in the air conditioned boarding lounge.
Unfortunately, Kuching airport is not a 24 hour affair and the lounge
was closed for the night. I had to make do at the open air waiting
terminal instead. I pushed two long sets of chairs together and tried
to go to sleep. I couldn’t even use my bag for a pillow coz I had stuff
inside that won’t appreciate the weight of my head. Furthermore, there
are grooves bordering every chair, which dug into my back the whole
night. I finally settled into a weird ‘S’ shaped position to avoid most
of the grooves and got a fitful 2 hours of sleep.

I didn’t even need my cell phone alarm to wake me up, several
passengers took it upon themselves to do that by walking around and
talking animatedly in an unacceptable volume before it was even dawn.
Anyway, I arrived in Sibu at around 8:25 am and was out the whole day
with my girlfriend. It’s 10:40 pm now and I’m so looking forward to a
12 hour sleep later. Mmm…sleep. 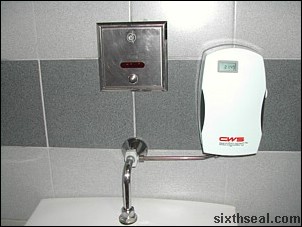 Water water everywhere, and not a drop to drink

Interesting fact: The flash from cameras sets off the infrared
automatic flushers in toilets. I took a photo of a urinal at KLIA, I
was intending to talk about how they have an LCD panel showing the time
in those things now. The flash set off ALL of the flushers in the
toilet. I tried it again, and sure enough, it worked like magic. FLASH
went my digicam. FLUSH went all 10 urinals. FLASH went my digicam
again. FLUSH went all 10 urinals like clockwork.

P/S – I do not have an obsession with toilets, but I do seem to find myself thinking about them a lot. 🙂