Headed down to Chadstone today to get some stuff to bring home. Since I
was there I also caught the 3pm screening of Spider-Man. Very nice indeed.
Tobey Maguire is perfect as Peter Parker and Kirsten Dunst looks as
delicious as ever. I like Willem Dafoe too, he was great in The Boondock
Saints. Anyway, I saw that Mum’s the Word is showing at Alexander Theatre
on my way back from the bus loop, and since that’s just a 5 minute walk
away from halls, I decided to go without
knowing what the production is about. A quick call to the box office
revealed that they still have front row seats. The fact that I’m going
alone does make getting good seats easier. I felt that I didn’t fit in the
target demographic though, as the crowd mostly comprised of 40-something
women. Hmm.. The show started at 8 pm and I was bored to tears in the
first part. The show was about a group of 6 moms talking about their
experiences. I had a good mind to walk out during the 20 minute interval
but decided to keep an open mind and stay for the whole show. There was
the new mom which opened the show with a very graphic depiction of
childbirth. There was also a new age mom, a feminist mom, a 20-something
mom, a jaded mom and a mom with a sick child. The lights went out about
halfway thru the production and the cast did a very impressive ad hoc
adaptation of the script. The cast of this season is not the same as the
brochure though, today’s cast seem to be younger, and one looks to be in
the early twenties. Photography is “strictly forbidden” but I did get a
photo of the set before one of the ushers informed me. Anyway, the second
half was more interesting, there was even a full nudity scene, but it’s
funny instead of explicit. The scene was about how the 20-something mom’s
baby boy ran away while she’s in the changing room and she charged out
buck naked and ran across the stage, giving the audience an eyefull. Heh.
All in all, it’s a solid performance by the cast, but I wasn’t interested
in the subject matter so I’ll be lying if I said I enjoyed it.
Nevertheless, it was an interesting two hours. I like live theatre
productions, and there are some good parts in this one like the Fabio in
the park scene, the banana scene and the hubby not getting any scene. 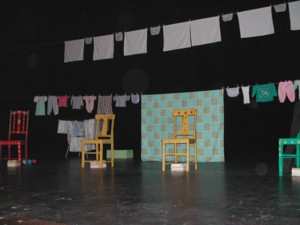 The photo of the stage before the performance started. 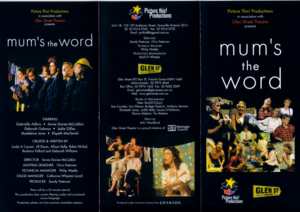 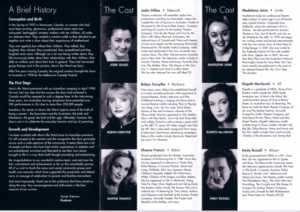 Edit: Large pictures have been removed.