Melbourne again. GMT +10 again. I arrived at around 6:45 am but got delayed by a HORRENDOUS line
to the red exit. The red exit is for people who have stuff to declare. The line snaked all through
the baggage collection area. I was waiting there for half an hour and I had barely moved 10 meters
and the line in front of me was 50 meters at least. There was this one customs guy going through
the line to try to reduce the people going for the red exit. After a bit of questioning, some
people were directed to the green exit. Now, come my turn, I told the customs officer I was
carrying stuff for a friend and I’m not too sure what’s in there so I have to go through the red
exit. This revelation alarmed the customs occifer, I mean, officer, and he directed me RIGHT
THROUGH THE CROWD to the alternate red exit! Apparently, there are two red exits, the normal one
with a mini x ray machine and manual checks and the alternate one with an industrial sized x ray
machine and more stringent checking. There were only 4 or 5 people in the alternate red exit. The
only way to get to the alternate red exit is to bypass the cordon, and for that you must be
escorted by a customs officer. How nice indeed. I jumped the bulk of the queue just by saying that
I was carrying “unknown stuffs” (make a conspirational face while you say it) for someone
else. Oh what a tangled web we weave. Heh. Granted, the checking is more thorough, but hey, it
saves you from queuing up. So if anyone experiences a long red exit queue at Tullamarine airport,
it won’t hurt to try telling the customs officer that you’re “taking something for a
friend”. Heh. I was slightly worried coz I had a warez version of Photoshop 7 conveniently
concealed behind my legit Nikon View driver CD, but fortunately the customs guy did not care to
look through it. I’m starting to think that the intellectual property issue is becoming less
enforced nowadays. What of those horror stories about warez CD being fined A$1000 each? 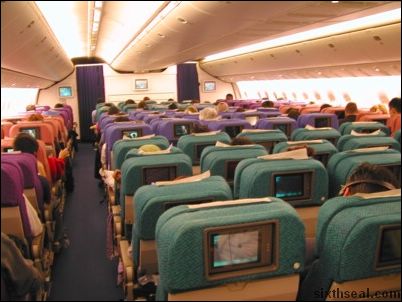 Oh, something funny happened on the KL -> Melbourne flight. There I was, reading a newspaper
while an orange juice laid in the cup holder of my seat, conveniently within arms reach. Alas, I
accidentally tipped the nearly full cup with my newspaper and it poured unto the pants of the guy
sitting beside me! How embarrassing…I apologized and got the cabin attendant to bring us some
napkins. The guy was pretty cool about it, but I still felt bad coz it wet the whole left side of
his pants and I could see he was uncomfortable for he put napkins on his pants to try and absorb
the orange juice. Oh well, these things happen in sardine class. Speaking about fluids, the Sibu
-> Kuching and Kuching -> KL flight left me all st and uncomfortable due to the heat. 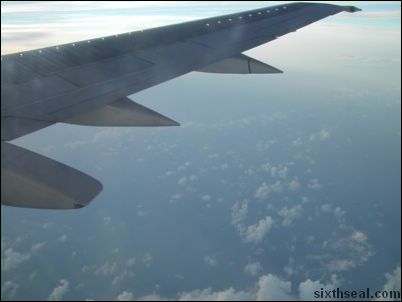 I finally caved in and paid RM 20 (!) for a private shower at the KLIA Airside Transit Hotel
[klia.com.my]. They give you a towel and you use the private toilet/sink/shower room. Bar soap
or liquid soap is provided in the shower. I still can’t believe I paid RM 20 (!!) for a shower,
but it sure felt good, coz I was st and uncomfortable by the time I reached KLIA. You know,
if you’re so inclined, you can actually bum a free shower if you want to. The hotel staff only
provides you with a towel and you leave the used towel in the shower, so if you bring your own
towel, I presume they won’t know either.

Well, I noticed that the in-flight entertainment system of Malaysia Airlines has improved. They
now have a larger library of games – even multiplayer games (chess, reversi, trivia) where you can
compete with other passengers. The trivia one is quite fun coz when the scores are tallied, it
displays all the current players and their seat number. But the best thing is that they have
Bejeweled! Apparently they have gotten a license from PopCap Games [popcap.com]. It’s not exactly easy to play
though, coz you have to manually move the square down the grid instead of using the mouse in the
PC version [popcap.com] and the Web version [zone.msn.com] or the stylus in the
Palm version [astraware.com]. Nevertheless,
it was very interesting to see it available in-flight. 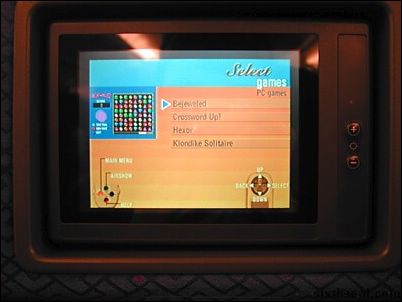 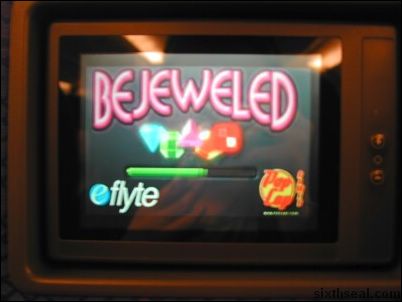 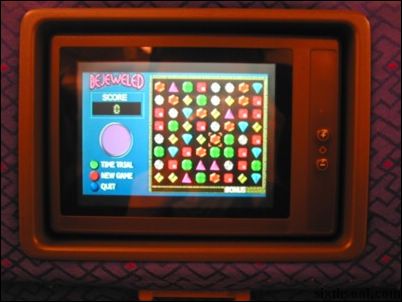