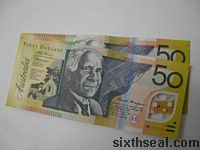 What is the significance of this? Read on…

I just came back from dinner at Malaysia Garden
[eateries.com.au] with Jimmy. He’s going back to Singapore for good on
Wednesday. We had the “Menu C” banquet and whoa, there really was a lot
of food, much more than we could finish. The first dish was a soup, and
then there was a platter with satay, curry puffs, spring rolls and drum
sticks and then came a large fried rice with a dish of chili prawn and
another of sweet and sour chicken. After that, there was another
large plate of fried rice and a plate of veggies and another of beef
with cashew nuts. We couldn’t finish the second wave of food and we
barely touched it. There was still dessert to go, it was ice cream with
rambutans. It was good, but the portions were too generous. It was
A$23.50 per person though.

Anyway, we were feeling rather lucky after that so we stopped by
Lunico Hotel, which is just beside Malaysia Garden and played the poker
machines for a while. Both of us have never stepped into a pokies joint
here, so we were basically just playing for fun. I changed an A$20 note
into coins and just slipped them into a pokies machined called
Cleopatra or some other Egyptian themed machine.

There I was, pushing the buttons periodically when suddenly the
pictures aligned up just right and this happy sounding music started
playing and the “Credits Won” counter kept on incrementing. It went on
and on, I expected it to stop soon, but it was just out of control! =D
It went past 500 credits, went past 1000 credits, went past 2000
credits and it was showing no signs of stopping. Too bad this is a 5 c
per game machine (A$1 gives you 20 credits) so the number doesn’t
actually reflect the amount in dollars. Heh. Anyway, I won about A$164
from that spin alone. There really is something to “beginners luck” eh?
This is my first time on the pokies and I was racking in more than the
regulars who’s practically stuck on the chairs.

P/S – It just hit me that I’m gambling on a Sunday. Oh, how I’ve
sunken into the pits of depravity. Forgive me Lord, for I have sinned,
but thank you for the bounty anyway. 😉