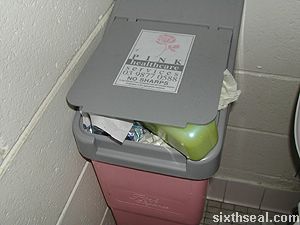 I don’t think my new neighbors is aware that this is a feminine
hygiene product disposal bin. Two new people moved in this semester,
one of my previous neighbors has graduated while the other moved to
Oakleigh in protest of the recent raise of the halls rent. The Pink
Healthcare Services bin has never doubled as a rubbish bin last
semester or the previous one, so I think either one or perhaps both of
my new neighbors is making the poor bin do double duty.

As you can see from the photo, it has been stuffed with
miscellaneous things like toilet paper wrappers, toilet papers, an ice
cream wrapper (?) and a plastic soap dish (!). The auto closing
mechanism of the bin has thus been blocked by the debris, and so it has
remained for several days. The cleaners should put up a sign clearly
labeling the original purpose of the bin to prevent such occurrences in
the future. Heh. :)

Edit: My apologies about all the disclaimers floating about.
I’m feeling a bit paranoid about getting raided, seeing as to how my
address is visible to anyone who does a whois query. Not that I have
anything to hide of course, nor am I in possession of any illegal
substances. Just felt like putting up the disclaimers.

5 thoughts on “The Pink Bin”