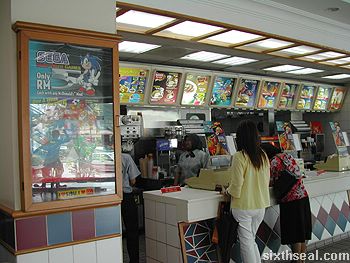 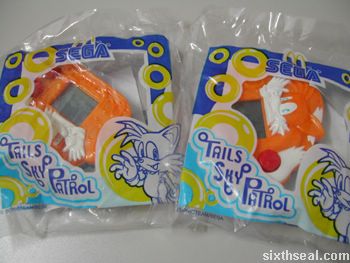 I did not wake up early because I was still sleeping, so I didn’t
queue up at 9 am. I only got up at around 10:45 am after a call woke me
up. I rushed down to the local McDonald’s and I’m happy to report that
I have managed to acquire two of Tails Sky Patrol (the Sega mini
handheld game this week – a new one every week). I’m planning to
collect one (unopened, in shrink wrap) and play with one. 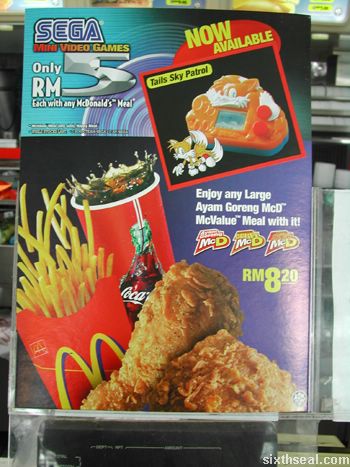 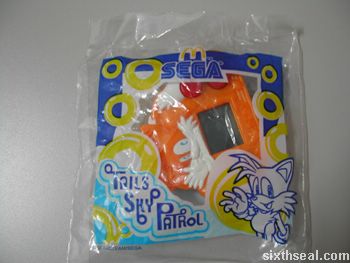 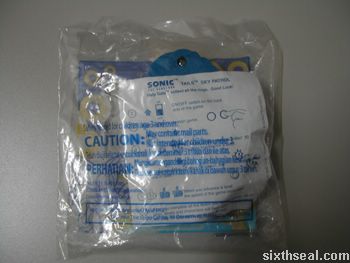 Well, the construction of these Sega mini games seems to be pretty
solid – the only one I have (Tails Sky Patrol) feels light, but sturdy.
There’s a bit of a rattling sound when it’s agitated though. The back
of the game has a simple On/Off toggle switch and the front is molded
to the Tails character from Sonic the Hedgehog. The LCD is about the
size of a postage stamp and has a pre-rendered background. By that I
mean the background is “painted on” and shows up even if the game is
not on. You know what I mean if you’ve been messing around with
handheld games before. 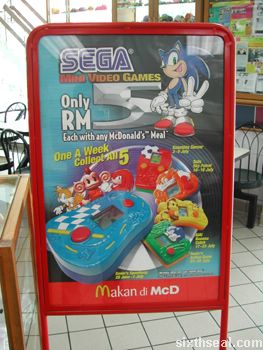 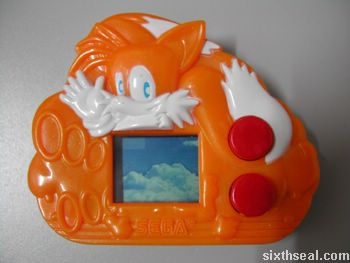 Front of the handheld game. 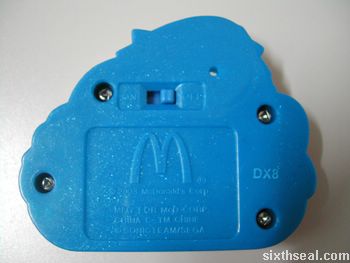 Back of the handheld game.

The background has scenery of a blue sky, with nicely rendered
cumulonimbus clouds. The two red buttons to move Tails up and down
seems to be able to handle a bit of rough play, but I haven’t put that
to the test. This game also has sound – it emits beeps, boops, and
squeaks, depending on whether you made Tails eat a ring, you missed
one, or the game is over. 🙂 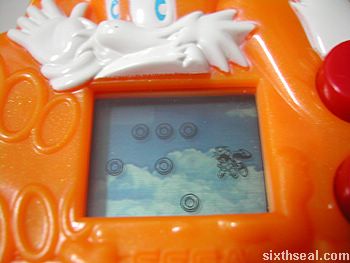 The game in action!

The game is pretty compulsive, a lot of fast reflexes are needed to
get through the levels, but I suspect that this isn’t a device that
would take a lot of punishment, so personally, I don’t think it’ll last
for all that long. It’s great value for RM 5 (A$ 2.50) so I would be
getting the other two in the series. Please email me
if you have the first two in the series, I’m interested in getting two
of each (but one would do if that’s all you’re willing to part with),
just offer a price in the email. Thanks! 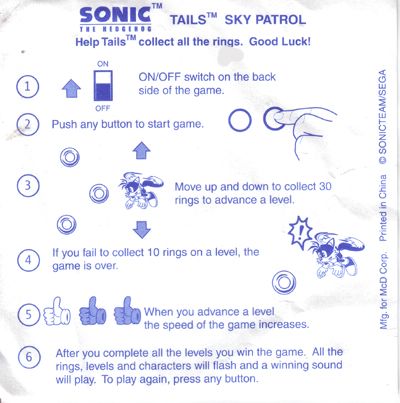 P/S – Has anyone taken photos of the back of Tails Sky Patrol? I
noticed this very interesting visual distortion where the blue bits
swirled and blinked and moved around. It’s not an isolated incident so
I wouldn’t call it a flashback. Try taking a close-up photo of the back
of this mini game and see if you experience the same visual distortion
when viewed through the LCD viewfinder. The front and other parts did
not produce the same effects, only the blue back of Tails Sky Patrol
did. I had to think very hard to remember whether I consumed any
mushrooms or blotters during the night! I’m pretty sure this phenomena
occurs because of the silvery finish at the back of the game – it just
messes with the digicam’s autofocus and that translated to bizarre
visual distortions in the LSD viewfinder. 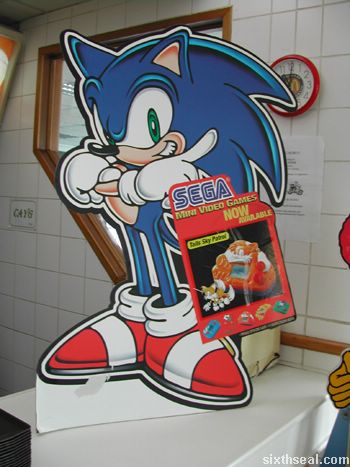