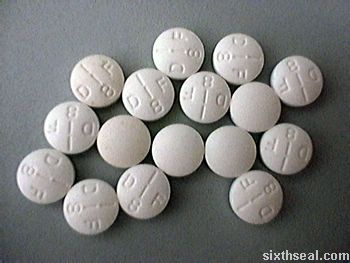 Dihydrocodeine (DHC) is something I’ve grown to love. DF 118 is the
most popular “brand name” for dihydrocodeine tartrate and it is the
most sought after tablet because it only has 30 mg of dihydrocodeine
and nothing else (except inactive binders and fillers). It is said to
be approximately twice the strength of codeine but personal observation
seems to indicate that it is indeed stronger than codeine, but
qualitatively, I did not find that it’s twice the potency, perhaps
slightly less than double the potency would be more appropriate. This
is from personal qualitative experience though, and I stress that
medical literature states that dihydrocodeine (DF118) is two times
stronger than an equal dose of codeine. I have been able to get a very
pleasant “nod” off these tablets. I’ve had plenty of nice nods with
this relatively tame opiate agonist. 🙂 I find that 210 mg of
dihydrocodeine or 7 x DF118 tablets (crushed up before oral
administration) + 5 mg Xanax (alprazolam) taken sublingually produces
this dreamy state I liken to The Land of Nod. This is not a dosage
guide! Most literature seems to indicate that dihydrocodeine is two
times more potent than codeine itself, but I’ve just not have the same
experience. It certainly doesn’t feel like what I presume a 420 mg dose
of codeine would feel like, though I’ve never taken it at that dose,
since it’s approaching the lower end LD50. The highest dose of codeine
phosphate I’ve gone is 330 mg. Qualitatively, I find that 300 mg of
codeine feels “stronger” than 210 mg of dihydrocodeine, but I need more
experiences to comment, since I’ve developed a tolerance to these
things from rather frequent use. It’s a scheduled prescription drug of
course, considering it does not have any other active ingredients
except dihydrocodeine, but if you can convince a pharmacist to hand
these over, it is much better than the codeine phosphate tablets
tainted with paracetamol eg 30 mg codeine phosphate + 400 mg
paracetamol. DF118 and other generic dihydrocodeine only tablets
contain ONLY 30 mg dihydrocodeine tartate as the active ingredient, so
there’s NO OTHER things like the liver destroying APAP in there.
Wonderful stuff. 🙂

Caution: Use of dihydrocodeine (DF118) and other codeine
preparations in conjunction with another CNS depressant like
benzodiazepines could potentially lower your respiratory rate to a
lethal level. Exercise caution.