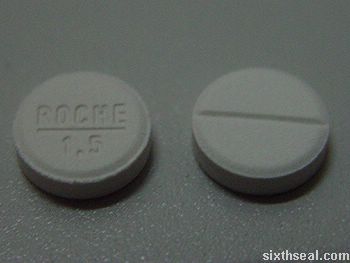 Bromazepam. This is the Lexotan brand name bromazepam tablets
manufactured by the illustrious Roche Pharmaceuticals. The blister
packs indicate that each tablet contains 1.5 mg of bromazepam, but it’s
written as 1,5 mg bromazepam (with a comma instead of a period ala
French style). I’ve taken these twice – 3 mg in conjunction with
codeine and other more potent benzodiazepines and 27 mg by itself. 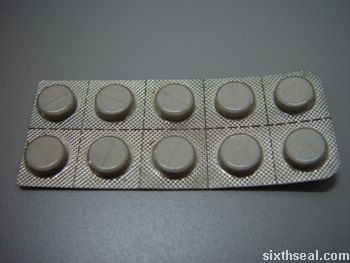 The front of the Lexotan blister pack

The second dose (27 mg bromazepam alone – no other recreational
substances) was pretty uneventful. I took it on an empty stomach and
I’m aware that this particular benzodiazepine can take up from as
little from 30 minutes to as long as 4 hours to reach peak plasma
levels (get the full effects) so I waited for 4 hours and 30 minutes to
get a feel for this particular benzo. I find that this is rather like
clobazam (Frisium) – all anxiolytic, no hypnotic action. 🙂 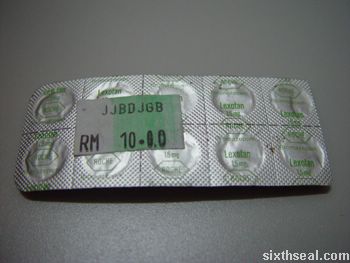 The back of the Lexotan blister pack

I did not feel sleepy at all, even though 27 mg of bromazepam is
equivalent to 45 mg of diazepam (Valium). Granted, I have a rather
significant benzodiazepine tolerance, but nevertheless, I found
bromazepam to be weak in its hypnotic effects (doesn’t make you
sleepy). However, it is a great anxiolytic (anti-anxiety agent), that
familiar Benzodiazepine Blanket with it’s “No worries, mate” feeling
was very dominant at 27 mg of bromazepam. 🙂 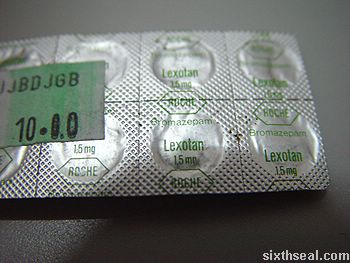 A closer look at the Lexotan blister pack

It is a GOOD anxiolytic, and it doesn’t make you sleepy, so it might
be great for some occasions, but I did not find anything significant
about this particular member of the benzodiazepine family to warrant
further consumption. I had to take 5 mg of Xanax (alprazolam) and
another 3 mg an hour after that to sleep. The price is rather
prohibitive too – each blister pack costs RM 10 (A$ 5). That’s 15 mg of
bromazepam for the price of 10 mg of alprazolam. Which one would you
rather have? 🙂 Anyway, benzodiazepine equivalency charts states
anywhere from 3 mg – 6 mg of bromazepam as equivalent to 0.5 mg of
alprazolam (Xanax) so do the math, it’s just not cost effective.
However, I am glad to have tried another member in that great, but
potentially dangerous family called benzodiazepines.

Please do not read any further unless you want to hear something you
don’t want to hear. I would probably not be answering
comments/flames/immature “Haha! Serves you right.” statements related
to the things revealed in the paragraphs below. Most recreational drug
users would not enjoy reading the following paragraphs, it’s about the
dark side. 🙂

Note: This report was written today, but the events described
within happened in the past (about a week or more back, I can’t really
remember). I have since decided to quit benzodiazepines and it’s a HARD
task, fucking things are practically impossible to taper off of. 😉 The
decision to quit benzos is a personal one, because I don’t want to be
blur all the time and have a fucked short term memory (Eh, wat did you
say again? I forgot laaa…sorry ah.). I admit I have been
self-medicating for anxiety at first, but I’ve noticed manifestations
of dependency which I do not like.

There are times when the anxiety screams for me to reach for the
benzos, but I’ve been disciplined *cough* enough to refrain. To date,
I’ve had two panic attacks, but I did not reach for the Xanax that has
“Eat me!” written on it both times, and I’m proud of that. =D Quitting
benzodiazepines after one and half years of regular use with regular abuse
towards the end of that time period is not easy. I’ve mentioned my
taper plan before in one of the previous posts – phentermine resin one,
I think it was. I’m not going on that slow ass Ashton taper plan, I’m
going on my own with minimal benzos (none during the day, only minimal
dose at night and reducing fast) and wow, it’s harsh, lemme tell you
that.

I’ve had a rather disheartening comment from a fellow benzodiazepine tapering person who said something along the lines of “You don’t have real anxiety lah, so you shouldn’t have withdrawal problems.”
which is unfortunate to hear from someone who should understand better.
*shrug* Anyway, my benzodiazepine of choice has changed to alprazolam
(Xanax) before the decision to taper which is a VERY BAD DECISION. The
rollercoaster Xanax gives, oh man…and I’ve been taking it like candy eg
7 mg in the day, 5 mg in the afternoon, 10 mg at night, absolutely
ridiculous doses that is just begging for trouble during the end, but
there you go.

Anyway, at the start of the taper, I maintained a steady plasma
concentration of diazepam (Valium) by dosing according to Ashton’s
manual, but I thought “fuck it” and drastically reduced the doses and
replaced morning and afternoon doses with either codeine/dihydrocodeine
or tramadol (Ultram). Not at recreational doses, just at slightly
higher than prescribed doses for rebound anxiety management.
Personally, I find that tramadol works wonderfully and its low
potential for abuse and dependency makes it a good choice for an
alternative to benzodiazepines. It helps with sleep too! Please be
aware that it also increases seizure thresholds though. Constant low
level anxiety is present, but manageable. 🙂 I am not blaming benzodiazepines at all – guns don’t shoot people, people shoot people. Benzodiazepines doesn’t cause dependency problems – irresponsible use cause dependency problems.

I don’t get withdrawals as bad as some people, I get it worse than
some people. I’ve acquired Zopiclone (Imovane) – a non-benzodiazepine
with benzodiazepine like properties to help me sleep and I plan to
switch to that instead of the small dose diazepam + smaller dose
alprazolam (optional) I take currently. I will switch to 5 mg diazepam
nightly starting from today for 2 more days and then go on zopiclone
(which doesn’t produce as much dependency problems as benzodiazepines)
for 3 days and then I’m fucking off. 🙂 I know I’m impatient, I don’t
like that taper plan that takes months, fuck that shit man, I can do
better than that. veritas will be benzodiazepine free in 5 days. It’s
not exactly cold turkey (you’re not supposed to cold turkey on benzos –
seizure risk) but it’s the best I can do and I’m not the most patient
person on the earth, and when I decide I want to be off, I want to be
off NOW. I do not need your sympathy, it’s not that bad, I’ll be off in
5 days tops. However, what I do need is your understanding – if I’m
irritable or uncommunicative for the next few days, this is the reason,
don’t take it personally. 🙂

P/S – I will still do benzodiazepine reviews from time to time, but
that would happen AFTER I’m off benzos. By going off benzodiazepines, I
don’t mean total abstinence – I just mean I don’t need to take it
daily. I still have two or three reviews (benzos I’ve consumed but not
written about) in the backburner though, so that would be posted at
appropriate intervals so benzodiazepine fans would not be bored. 😉
Personally, from now on, my benzodiazepine use would be kept to an
occasional weekend thing or just for reviews of benzodiazepines I
haven’t had before – as it should be for something that can produce
dependency problems.