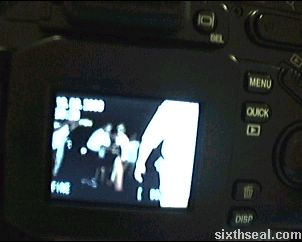 I’ve just taken photos of the parade (?) down Jalan Bukit Bintang
(caught it at Bintang Walk) with my new Nikon 5700. Yeah, I’ve finally
decided on that, managed to find a store selling it at RM 3100 (cash
only) or RM 3168 (with 2% credit card charge). It’s a graduation
present from my dad. Anyway, I can’t actually show you all the photos I
took of the parade because this Internet cafe is running Windows 98 so
it won’t detect a USB digicam connection and mount it as a new drive.

I didn’t bring the driver CD out and Nikon View supports a minimum
of Windows 98 SE (this cc is running the first edition) and I can’t
find the drivers on the Nikon site for the life of me. Anyway, that
long assed explaination is why I can’t post up the photos today. I can
do something a little unorthodox though…I’m using the webcam to
capture the digicam’s LCD screen during play, so that blurry photo
above is supposed to be of this guy wielding this very long stick with
Sharp Things on both ends while in a trance.

Anyway, I don’t know what’s going on, I just saw a lot of police and
Rela members to control the crowd and traffic while I was walking back,
and saw that there’s a procession going on. I got quite a few photos,
it’s like the procession that happens at Cheng Beng, where people piece
theirselves and walk down in a trance. I’ve always wondered if they
took anything…does anyone know? A deleriant perhaps, or a psychedelic
of some sort?

Well, I could only see two groups in the procession, Chinese and
Indian. The Chinese ones were mostly pierced across the cheek and they
wield all sorts of things like meat cleavers, saws, and all that and
walk around in a trance guided by the front person. The Indians had a
lot of limes on their bodies, and there’s this guy who was being hooked
by well, hooks and pulled by another guy. Lots of blood, very nice. The
procession puts the fun into photography, great event to break in the
digicam with.

Anyway, I can’t upload the photos today, so tomorrow it is then.
Well, regarding the Nikon 5700, I think it’s great – been thawing on
getting either this or the 5400 and finally decided to forgo portablity
(the 5400 fits in a pocket) for the additional 4x optical zoom (5700 is
8x optical). I could fit the 5700 in my pocket if I were wearing cargo
pants, but otherwise not, so I slinged it around me, that would
probably be the way I’ll be carrying it now.

Well, that’s it for today…going back to the hotel now. I’ll be
moving to another hotel near Petaling Street starting tomorrow. My
apologies for not being able to upload the photos, I hope the Petaling
Street Internet cafes would have a newer OS, because I’ve filled the 32
MB CF Card and most of the 128 MB one.

P/S – Jasmine, thanks for your SMS, I couldn’t reply because the cell phone didn’t save the message after viewing. Sorry!