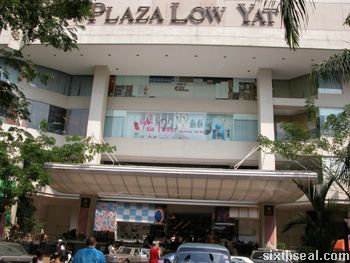 The photo above has an interesting annotation to it. While I was
taking this picture, an American tourist came up to me and said hello.
He had the exact same digicam (Nikon 5700) and he introduced himself
and said he noticed me taking photos using the LCD monitor (which is
how I always take pictures). Well, he said he just wanted to give me a
bit of friendly advice – he told me he’s always used the viewfinder
(the one you have to squint through like film cameras) because that
causes less jitter.

Anyway, yeah, I did notice that I haven’t gotten the optimal holding
position and shutter release for this new digicam right, but using the
viewfinder does not cause any more stability for me, coz it’s a
question of getting to know the digicam and giving the shutter just the
right feather touch to not move the body. Better photos will come in
time, after I break it in..been taking heaps of photos these few days.
Well, anyway, I said thanks for the tip, but told him that I suspect
that using the viewfinder to take photos while standing in the middle
of the road in KL is likely to result in a trip to the hospital. 😉 He
laughed and said “Very true”. 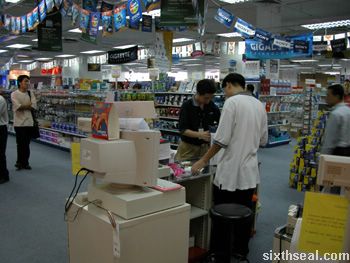 Well, I had gotten all the price lists from the Low Yat and Sungai
Wang vendors twice – Sri Computers generally has the cheapest prices,
but All IT Hypermart has better prices for some and their service is
MUCH better than Sri Computers. It’s on the 4th floor, it might have
been cheaper to pick and shop, but Sri Computers offers competitive
prices and they give discounts. My bill came up to about RM 2700 but I
told them I’m only prepared to spend RM 2250, and after some
negotiations, they agreed to push the price down to RM 2300 and
assemble everything for me (saving me bloody fingers [sixthseal.com]) and carry everything down from Low Yat to the taxi stand at BB Plaza. 🙂

My configuration is not top of the line, but it’s acceptable:

I chose the Barton for something new, even with a lower rated speed
I figured I’ll give the relatively large L2 512KB cache a run. I got
the 2600+ (Thoroughbred) last time, so I’m going for a different one
this time. The nForce2 architecture motherboard was chosen for
economical reasons, this model comes with an integrated GeForce4 MX and
sound + other misc. stuff I haven’t explored. I know the nForce2 shares
system RAM though, so I got 512 MB, I may add another 512 MB in the
near future. Currently, I allocated 64 MB for the integrated GeForce4
GPU, the largest it can go is 128 MB. Unfortunately, I had to use
DDR-333 instead of DDR-400 RAM for compatibility with the integrated
graphics.

Anyway, enough about that, I just need to get headphones soon and
the Logitech Freedom Optical (the one I’ve been using up till the water damage incident
[sixthseal.com]) sometime in the near future. I love the Zero Degree
Tilt keys, I type much, much faster. My old headphones (which was
recently broken) was the A$ 330 (RM 660) Sony MDR-V700DJ, which I
bought in Melbourne. It has served me well, though it gave me a
hankering for good headphones. I don’t think I can afford that now,
considering I have non-existant income in Malaysia, but I’ll try and
get a comparable one. Enough rambling, let me tell you about how I had
make 3 round trips using a taxi to Low Yat Plaza. That’s 6 trips…and
it’s all my fault. 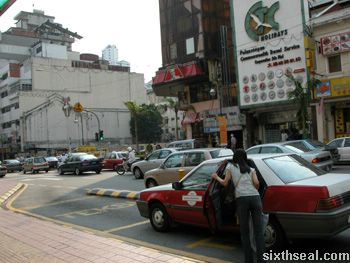 I got everything back in the first run, but unfortunately I seem to
have forgotten all about monitor to PC power supply cables. I…er,
didn’t know what they were, so I went back to get a dedicated one.
*cough*. Then I came back to the hotel and booted up and intended to
install Windows XP Pro…but I seem to have lost the CD I brought over.
Curses. It was in my resume file and I must have dropped it while going
for the interview. A new hard disk with no OS…how troublesome…only
1 of my 4 other hard disk that I brought along has an installed OS
(others are data only) and that’s Windows Me and it hanged at the
startup screen: 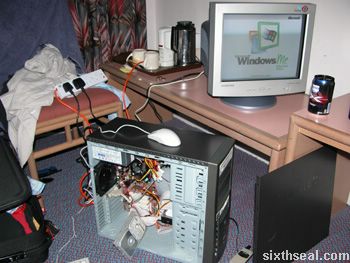 Hooking up stuff at the hotel room

Anyway, the third trip was to Imbi Plaza to get another Windows XP
Pro CD. Oh yeah, what about that “software piracy” crackdown?
Everything seems fine at Imbi Plaza and Low Yat. Well, the last return
trip was a bit of a hassle…no one wanted to take me coz of the
traffic jam and the few that wanted to asked for a flat rate charge of
RM 15 for compensation. I know that’s common practise in KL and it was
peak traffic hour, but I didn’t want to, so I waited for one that
charges based on the meter and you know what? It came up close to the
quoted price too due to the obscene traffic jam. 🙂 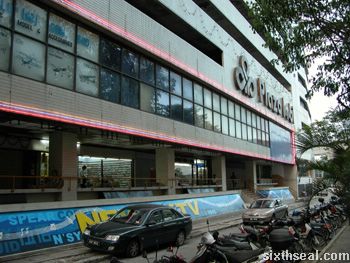 Anyway, I’m off to bed…will confirm with XM Expanded Media to see
if I got the position tomorrow. I’ll also post up many photos of
okonomiyaki, from the preparation through the cooking to the final
dish, so if you like things like that, come back tomorrow afternoon.
Well, I see from the stats that Malaysian visitors come to less than 2%
of the total so it’s appropriate to note that my local time is GMT +8.
Oh yeah, I have to pay extra bandwidth fees again this month, now that
really sucks. Someone employ me so I can afford all this. 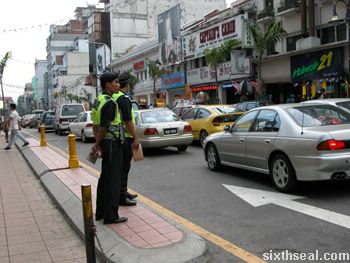 I’m sorry I can’t reply the comments today…I’m about to fall
asleep on this keyboard here at the hotel’s business center, I didn’t
get a modem so I have to update here…it’s okay, they average 35 Kbps,
not blindingly fast, but it does the job. 🙂 I will reply every single
comment when I update with the okonomiyaki photos tomorrow. Thanks for
the feedback!

532 thoughts on “Buying a computer at Low Yat Plaza”