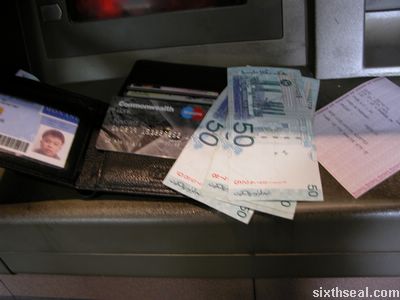 I keep my Commonwealth Bank (Australia) bank ATM card in my wallet –
it’s still valid, the account still has money inside, but that’s not
the point. I USED IT TO WITHDRAW CASH FROM A MALAYSIAN ATM MACHINE! I
don’t even know how that’s possible and the conversion rates + service
charges must be really something. I shouldn’t even be keeping it in my
wallet, but I’m going back to Melbourne at the end of the year for my
convo and so I keep it around. I have a Public Bank (Malaysia) ATM
card, that’s what I use here, but I don’t know what I was thinking at
that time…for some reason I just inserted the Commonwealth Bank card
instead of the Public Bank one. Blur like what… 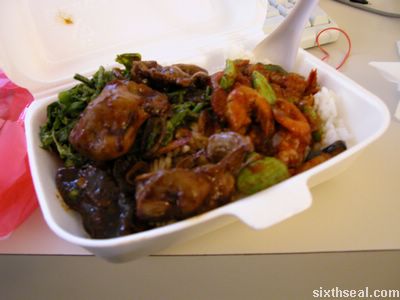 Anyway, I was about to go out with my co-workers for lunch, but
suddenly remembered I have hosting and billing issues to settle so I
headed back and got lunch downstairs instead and ate at the office in
front of my workstation. It’s currently empty except for me and two
other programmers. That’s steamed rice with chilli prawns, chicken
stomach in sweet sauce and some kind of vegetable. Excuse me, after
lunch coma…

Oh right, we have an inter-department bowling session at 8 pm
tonight, so I don’t know if I’ll be updating later. Take it easy on the
bandwidth guys. 😉

7 thoughts on “The ATM fiasco”