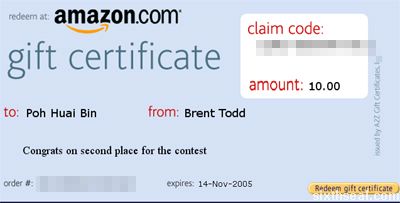 I received a US$ 10 Amazon gift voucher from Brent, who runs The Weblog Review
[theweblogreview.com]. I’m not sure if I should be saying this since it
hasn’t been announced but it was supposed to be on Monday. *shrug*
Thanks Brent! I did not know about the contest until two days before it
closed and er…posted up a review that I did several days ago with a
link right on top. *cough* I figured that with the 1.3k visitors I get,
someone is bound to click on that link, and sure enough 42 people
clicked on the link when it was the first post.

I know, that’s not exactly ethical, but checks and balances were in
place – a reviewer cannot win first price (US$ 20), only second place
(US$ 10). I was told that I was actually the top referrer, but I write
for The Weblog Review and it was decided that it would be unfair for
others who does not have the liberty of posting up reviews to…well,
give hits a boost. I write once in a while, even though I committed to
one review per week, which reminds me…I need to write one tonight. 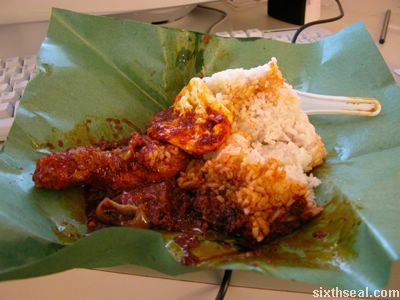 Anyway, I’ve been eating nothing since this breakfast I grabbed this
morning. There was a stall that always was in front of the workplace,
but they weren’t open during the puasa month until today. Which reminds
me, thanks to Taryn I now get to run around the office and take photos
of people doing (client’s name) work and send it daily to Catharine,
the Creative Director. Yeah I can’t talk about work stuff or post any
photos because of the NDA I signed and the confidentiality agreement. I
just took a couple today, the first batch, but again, only for internal
use.

I just got back from the office not long ago, wanted to finish up
some stuff and I had the energy and mental clarity (hey, from caffeine
ok) so I reckon I would finish it up before going home. Also, I
couldn’t seem to drag myself off the seat and the thing I’m working on
is rather compulsive on coffee…I just had to finish it off, or else
I’ll never leave it alone. 😉 It’s like…hmm, you go down the list one
by one and you just have to finish everything, you can’t concentrate on
any other thing. Tweakers, you know what I’m talking about. Disclaimer:
That sentence should not be interpreted to mean that I myself ‘tweak’
in the classic sense as I was using that term for caffeine.

Thus, I won’t be sleeping tonight, there’s not much time left
anyway. I did get enough sleep yesterday, so yeah, will be up while I
write a review and maybe work getting another one of my “meth projects”
off the ground. Disclaimer: “Meth projects” is simply a metaphor for
the things I start (remember sixthseal.com mailbag? the autograph
project? and now this Black Kingdom chapter-a-day fiction) but don’t
finish, and is not an admission of any activities normally associated
with that term.

Well, more verbal diarrhea, it seems that there is some activity in
the search engine world (well, I only aim for Google) recently. I’m not
a hardcore SEO (Search Engine Optimizer) per se and it’ll be sad to see
the Malaysian blog scene start to care about PR (PageRank) and compete
for SERPs (Search Engine Results Page/Position). There are blogs out
that that will not link a lower PR site or one that has PR 0 or grey
barred because outbound links are essentially a ‘vote’ and will
contribute PR.

IMHO, that’s counter productive, especially in the blog scene. It
shouldn’t matter what PR a blog is, if you like it and read it daily,
then by all means link it. That’s what community is about…not linking
to get PR or to hog PR. Personally, I’ve never minded what PageRank a
page is before linking, everyone started with a low PR and get
“importance” from content or inbound links, which I like to call
“uplifting”. Read Davin Brin’s Uplift saga to get that.

Anyway, just in case you didn’t know, yeah I do a bit of SEO but
it’s mainly for SERPs. I’ve got a couple I’m proud of (particularly
this high ranking one in a high results (millions) keyword) and some I
don’t give two fucks about, and I’m glad to say that I dropped in the
latter but not the former. 🙂 I don’t even know when Googlebot crawled
nor do I have time for these things now but on an interesting note:

I’m thinking about using Apache redirects at the .htaccess level to
consolidate PR but I don’t know whether Googlebot likes that or not.
I’m pretty sure the PR 6 is just Google flux anyway and I’ll be back to
PR 5 again soon. I publicize the site as “sixthseal.com” which would
get the browser to display the 3rd URL. However, inbound links are
mostly using the 2nd method, which is what I use to link internal pages
too. I don’t see the logic behind a PR 6 for the URL without the /
though.

Enough Search Engines 101, basically, I was surprised to see a PR 6
on the URL without the trailing / and was interested to see metafilters
topping me using my link (not PPS) and was happy to see that the SERPs
I hold dear are still there. If anyone is wondering what keywords I
target, wonder no more, it should be pretty obvious. I won’t be stating
them here, since they’re all er…chemically related.

Anyway, if you just skimmed through all that, you might get the
impression that I’m making two different stances. I’m not, I just meant
I personally do some optimization (but not hardcore ones, don’t have
time for that) but that doesn’t mean I care about the PR of blogs I
link and I don’t think anyone else should either. It would be sad to
see the blogging scene degenerate to a “Will I gain PR?” link policy.

Okay, it’s 2 am so I should stop talking now. I’ll write a review
and then reply the comments and write the nasi ayam post if I have time
left tonight and write another chapter of Black Kingdom in the unlikely
event that there’s any time left after all that. I’ll be back again
after writing a review for TWR.

You know, I found that talking about SEO issues during Google Dance always lowers my PageRank. Heh.

1 thought on “US$ 10 Amazon Gift Certificate”