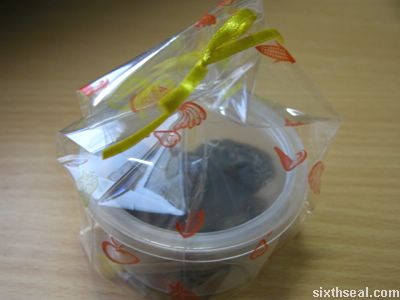 The staff at the KLCC LRT station were giving out nicely packaged
buah kurma (preserved/dried dates) at the monthly ticket entrance as I
got off from work yesterday. It was relatively early – around 6 pm when
this happened. They had boxes of it and I tried taking photos, but it
was the after office hours rush, so I couldn’t get a shot of the
personnel handing them out – someone is bound to walk into the frame
due to the volume of commuters. 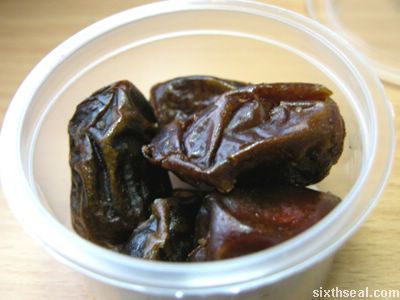 Anyway, here’s a closer look at the dates in the container. It
tastes good, dry and yet slightly moist in the middle. There is a
surprisingly high fructose content too, a little too cloyingly sweet,
but it’s great to eat when you’ve been without food for a while. It
seems to be one of the more common things people eat right after buka
puasa.

Which reminds me, there is a company buka puasa at Hotel Equatorial’s Nipah CoffeeShop later at 6:30 pm.