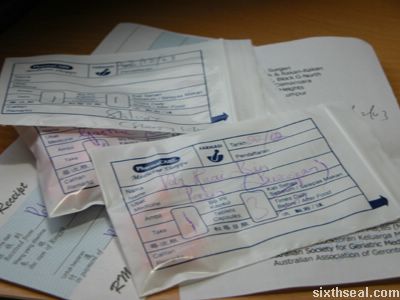 I had wanted to write a little rant about my quack doctor, but I’m
too tired right now. I walked to see the nearest doctor – wasn’t easy
for me when my chest pains, fast pulse and labored breathing afforded
me a pace slightly faster than a sloth. Two old men with canes passed
by while I was clutching my chest and poked me to make me walk faster,
while laughing derisively. Okay, that last bit didn’t happen, but yeah
it did take me a while to reach there.

Anyway, I told the doctor I’m worried about my cardiovascular
situation and he went “Heart problems? At your age?” in a disbelieving
tone. Yes, another one slipped through the cracks of med school. I told
him I have hypertension and he did his quacky listen to my heart with
the stethoscope thing and asked “Did you just run here?”. I would have
walked out of Mr. Quack’s clinic if the walk here hadn’t already used
up all of my remaining energy. Fuckwit.

I told him patiently (which isn’t hard to do when you have to work
hard just to breath) that no, I walked very slowly. I tried to make it
simple for him by putting things into words he can understand but
unfortunately he believes he knows more about my body than me. He
tapped me a couple of times on the stomach and said “I think it’s acute
gastritis. I’ll give you some pills for that.”

Oh, for crying out loud…

I told him to measure my BP at rest, which thankfully was a
relatively low 170/95. The second measure yielded the same results, so
I’m not bothered about it. Call me when it’s 220 systolic. 😉 I think
my pulse rate knocked some quackiness out of him though…he measured
me at several points and finally said that I had a very strangely
strong and rapid pulse. Well no shit Sherlock, I’ve been having chest
pains, shortness of breath and I don’t even need to feel myself to hear
the pulse beating.

Now here’s the thing. He made a quick decision to wash his hands of
me and suddenly said, “Oh, you’re still young, perhaps you just had too
much coffee or something. I’ll give you some pills for the chest pain,
but I think it’s probably acute gastritis so I’ll give you some of that
as well, and you can take it easy and sleep tonight, I’ll give you two
sleeping tablets”.

The “chest pain pills” were Buscopan (hyoscine-N-butylbromide),
let’s give him a big round of appause for prescribing that to a patient
with hypertension and tachycardia @ 180 (sustained).

Fucking Quack, I’ll stick to my lorazepam prescription to control
the problems until I see a real cardiologist. This one is the GP you
see when you catch a cold, anything more complicated would be way above
his league.

My apologies for not being my usual self today, I’m irritable from
the high body load all this is giving me. It’s a good thing I already
wrote the next Melbourne post on Satuday, so I’ll just upload the
photos and the post will be up in a while. I’ll be fine, I’ll go to
sleep soon and wake up anticipation for the work that’s lying in wait
for me. Whee!

Hey, I did write a mini rant after all.