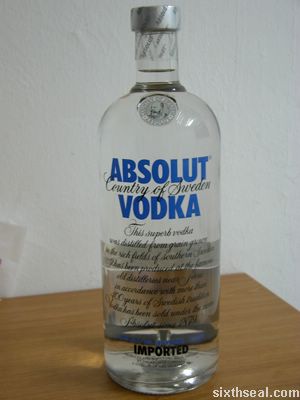 It looks like a normal bottle of Absolut Vodka on the first glance. These are the 1 liter bottles, not the 750 ml ones. 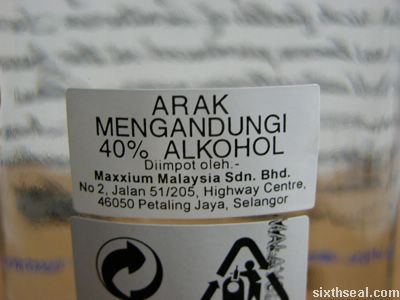 Further inspection didn’t reveal anything dubious about this bottle of vodka too. Imported by Maxximum Malaysia Sdn. Bhd. 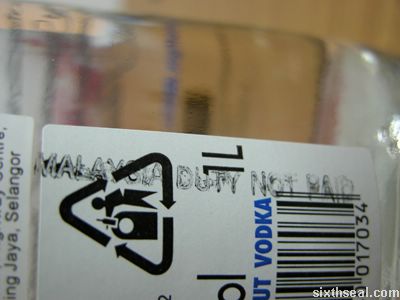 “It’s got to be here somewhere”, I thought and scrutinized the
bottle. Here it is! The “Malaysian Duty Not Paid” stamp. I was told
that there are multiple routes for the…ah, diverted liquor industry,
with some coming in from Labuan, some coming in from Langkawi and some
even from Singapore (!?!?). Labuan and Langkawi are duty free havens
with RM 1 dollar cans of beer (A$ 0.35 cents) and bottles of branded
distilled spirits for RM 30 (A$ 10). By the time it gets to the “duty
free liquor specialists” in Kuching, the price is sold to the consumer
at RM 55 for this bottle of 1 litre Absolut vodka. This is undercutting
legitimate outlets by RM 20 – RM 40 and up market drinking
establishments by up to RM 150. There are discounts for bulk purchases,
6 bottles of these will lower the cost to RM 50 per bottle. Bottles up
to the duty free liquor industry! Ah, I meant bottoms up. 😉

P/S – My digicam CF Card reader seems to be broken so I had to go
out and get an Apacer 8 in 1 card reader to get the photos in. Two
girls sitting at a coffeeshop gave me wolf whistles both times I passed
them. 🙁 Now I know how females feel when they get sexually harrassed
like that. I feel violated. I feel dirty and scared. I want to go home
and take a long hot shower and curl up in a ball under my blankets…

Nah, actually I enjoyed the attention. 😉

3 thoughts on “Warning! That bottle of Absolut Vodka is not what it seems!”