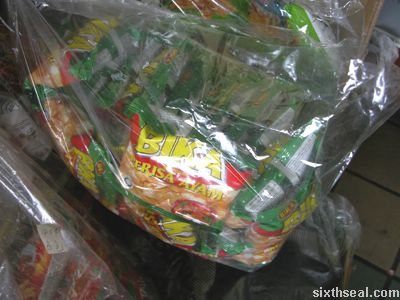 Do you remember those square tapioca keropok (crisps) that was
widely available in our primary school days? I love those things – it’s
the best testing crisps in the world! It’s made from tapioca instead of
potatos, unlike mosts crisps. I seriously cannot find anything that
rivals these things (though Double Decker chicken crisps comes a close
second)…it’s simply delicious. I couldn’t find it in normal retail
outlets though…it seems to be only sold in bulk (100 packs or so). 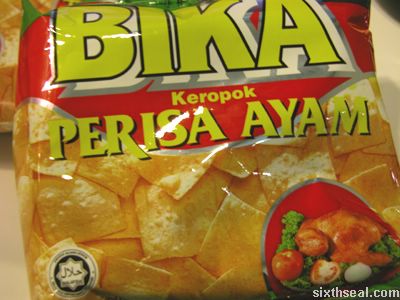 Well, I managed to find some at this shop near a primary school – it’s not the original ones that I remembered, but they taste exactly
the same. It costs the same too, which was surprising. It’s a very
affordable RM 0.20 per packet. Just 20 cents like it used to be!
Nostalgia…I could eat heaps and heaps of these without getting sick,
and most people in my workplace loves these things too, the shop is
near the place I work. 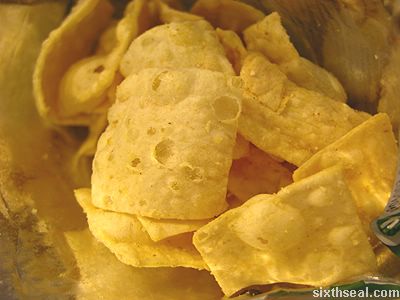 Basically, its square crisps flavored with chicken with heaps of MSG. Mmm…tasty!

In other news, I had a long meeting today with the MBKS (Kuching
South Council) mayor and his entourage. I don’t know what half the
people in the meeting room was there for – they didn’t seem to be
related to the project and was just there sitting passively and nodding
their heads and smiling at the appropriate moments (usually on the
mayor or his assistant’s cue). I went to the MBKS HQ with my CEO, CFO
and CTO and we successfully secured a project…which means more work
for me in the foreseeable future, but hey, it’s what I’m being paid
for. The suaku guy in me was amazed at the expensively decorated and
architecturally extravagant interior and the lavish meeting room. There
was even an attendant to make sure our coffee cups were full and he was
serving us sandwiches as well. It’s shrink wrapped individual ones with
a polystyrene container and a three layer sandwich in one side and a
two layer one in the other. I don’t know what’s inside though. We later
surveyed the site for a while and I highly regretted not bringing my
digicam along (I figured it would look unprofessional) since there were
good photo opportunities – the view was amazing from there. Suaku guy,
signing out…