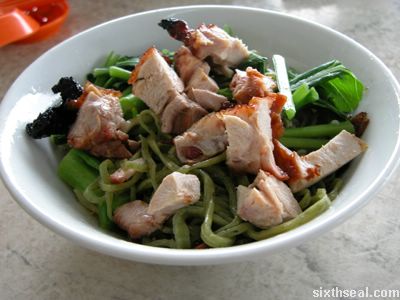 Have you ever had green kolo mee? I’ve never even heard of it
until today! The beauty about these noodles is – the green didn’t come
from food coloring…it came from vegetables! I had these at Chong Chon
at 3rd Mile Bazaar, Kuching. The stall is called Chong Chon Kolo Mee. 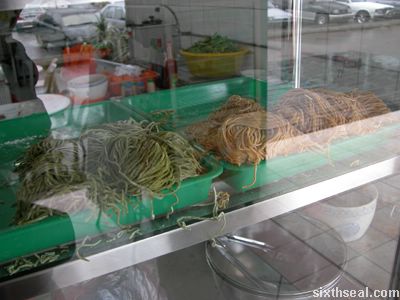 This stall has some unusual offerings – noodles that add life to
plain kolo mee. The photo above shows that they have two choices of
noodles – either green vegetable noodles or orange carrot noodles. I
thought it was just food coloring, but it isn’t – the owner of the
stall told me the green ones are made with bits of vegetables inside
them and the orange ones are made with bits of real carrots inside them. 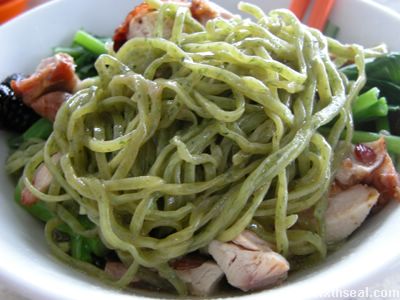 How’s that to spice up the simple kolo mee? They add nice chunks of
relatively large bbq pieces instead of the usual char siew and there
are a lot of veggies in the dish. I have never seen anything like this
before, but it sure tastes good – you can actually tell that the
noodles are made with veggies inside!

I was told that the noodles here were good and I wasn’t
disappointed. My CTO brought me here to have lunch at 2:10 PM. My lunch
break is from 12 PM – 1:30 PM, but we had a meeting with the SUPP
(Sarawak United Peoples’ Party – part of BN) Batu Lintang
representative which was scheduled at 11:45 AM. It took till 2 PM to
finalize the details and he was about to drive back to the office when
he suddenly though “Oh, you haven’t have lunch right?” *slaps forehead*
Yeah, I was in the meeting with you, so of course I haven’t had any
lunch. Can’t blame him though, he has a lot on his mind and he’s a
really nice guy, even though I had to work 1 1/2 hours extra today. 😉
Regarding the project, if you want my honest opinion – it’s is a crazy
and logistically challenging project. The “technical guy” (and I use
this term very loosely) in SUPP has…well, flawed understandings about
distributed networks (to call a spade a spade) and drew up this
unrealistic diagram. I don’t know the scale from the map yet, but if
it’s what I think it is, it’s going to be a real challenge to deliver
what he’s asking for. However, I, Huai Bin, is here to make 2 + 2 = 5,
so I’ll be damned if I don’t deploy this solution, by hook or by crook [pengsan.com].