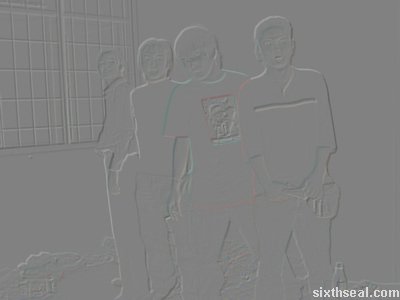 I didn’t really get to bond with them until one fateful weekend. It
was during lunch break on Friday when Aaron suggested that we go to
Palladium that night. Palladium is a club in the Christchurch city
which enforces a 21 and above only entry rule due to alcohol being
served. I was fascinated (and slightly apprehensive as well) – I’ve
never stepped foot inside a nightclub before. I’ve always been told
that these places are evil and I shouldn’t ever patronize one.

The years of parental propaganda wrestled with the strangely
attractive notion of doing something “bad”…and it was the latter that
prevailed, albeit with slight tinges of guilt. The others have all been
in there before and assured me that I won’t be asked for ID. I beg to
differ coz I have a rather innocent and young looking face. I would not
pass as a 21 year old unless the bouncers all happen to have a long due
appointment with their optician.

Thus, Aaron got me a fake ID from one of his university friends. The
photograph on the ID does not look like me at all and the name was an
Indonesian name. I had to memorize the name and the birthday. Anyway,
the others told me about the dress code and we arranged to meet in
front of the Riccarton High School gates at around 7 PM. We had planned
to crash at Tom’s house so I brought along a change of clothes in my
backpack as well.

I have never stepped foot into any entertainment venues before
this…tonight was going to change all that. I was looking forward
(with some trepidation) to what my mind’s eye imagined the club would
be like. The four of us met up at the rendezvous point and walked to
Church Corner to catch the bus to the city. We went to have dinner at
what would be our regular haunt in the days to come – the Chinese
eatery near the town square. The wonton was really good and relatively
cheap at NZ$ 6.

It was time to head into the club. I was constantly reminded to walk
in confidently and not to look guilty. There were two bouncers outside
the door of Palladium and I avoided eye contact with them and tried to
walk in nonchalantly behind Aaron…until I heard one of the bouncers
say “Hang on mate, can I see some proof of age please?” The others
stopped with me while I passed the fake ID to the bouncer. He looked at
the card and gave me the once over and asked me what year I was born in.

I faltered before remembering the birth date on the fake ID. “I’m
26, born in 1970”, I replied and tried to look insulted at this
affront. The bouncer raised his eyebrows skeptically and I silently
cursed Aaron for getting a fake ID that puts me 10 years older than I
really am. However, the bouncer just shrugged and handed the card back
to me and waved us inside. I’m in!!! We had a good laugh about how
Asians must look all the same to Caucasians because no one would
mistake an Indonesian for a Chinese.

Palladium was not what I expected…I have been fed with stories
about the sinful debauchery and violence that occurs inside clubs was
expecting it to be some dirty den filled with society rejects. I was
rather surprised to see everyday people in the club – university
students, office workers…normal people. There goes another false
depiction drilled into me since I was young. We secured a table beside
the dance floor and ordered a round of drinks.

I have never had any alcohol before so I sipped my bottle of
Heineken tentatively. We had a bit of a boogie at the dance floor and
after two hours, Ah Boon noticed that I was still holding the
very same bottle, which had barely three small sips taken out of it. He
asked me whether I had bought more drinks and I said it’s the same
bottle from when we came in. He was appalled at the speed (or rather
the lack of it) of my drinking. 😉

It was rather funny, now that I think back to it. I told him that I
was afraid of getting drunk and didn’t feel like drinking it anymore. I
handed it to him and he gamely chugged the relatively full bottle down.
I wasn’t inebriated at all…it was just all that propaganda that made
me fear being drunk that prevented me from imbibing the golden amber fluid. I later realized that I have a high alcohol tolerance…

However, that was not true for Tom. He has a very low alcohol
tolerance and was completely inebriated and flushed from just one beer
and one shot of tequila. He kept on saying he felt like throwing up and
later resorted to lying in the fetal position at the plush chairs at
our table and told us to wake him when we leave. We left soon after
that though, coz Tom was complaining that he had a pounding headache.

We went to the 24 hour KFC nearby to get some supper. Tom promptly
threw up and did so again during the taxi ride back to his house. He
immediately fell asleep when he got home and we got some rest too. It
was around 12 PM when we woke up the next day. I had expected that
we’re going to head home. I was still a newbie at that time and one
night was considered a big one then.

However, the others had plans to go play pool at this snooker and
pool outlet in the city called 9 ball. I was wondering whether I should
go or not, since I was pretty tired…I’m not used to sleeping anywhere
other than my own bed so I didn’t get much sleep the night before. I
was intrigued by pool and snooker centers though, coz the propaganda
machine told me it was full of juvenile delinquents so I decided to go
along and see if that was true. Strike two, another parent instilled
horror story disproved.

Ah Boon taught me how to play pool…the setting of the balls, the
way to properly hold the cue, the method of striking without deviating
from the aim, how to hit different spots to manipulate the ball
movement, how to follow through and stop for positioning, about solid
and stripe balls, the angles to hit the balls to pocket them –
basically, the rules of the game for someone who hasn’t played pool
before. I loved it. It helped that the heroin chic looking (in a good
way) girl who manned the counter was really friendly and hot too. 😉

It was night when we left and we grabbed some fish and chips to eat while waiting for the bus back.