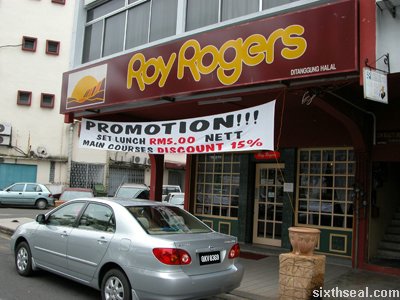 It came to my attention that there was a banner promoting the new RM
5 set lunch promotion flapping under the local Roy Rogers signage. It
sounded like a great deal so I dropped by with one of my coworkers for
lunch just now. 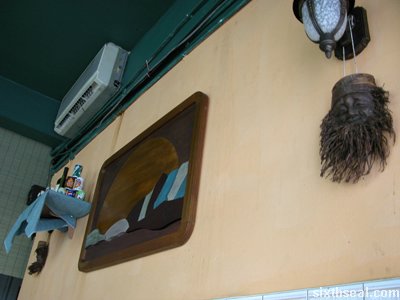 This is what the interior of Roy Rogers looks like. There are a few
quirky contrasting design motifs like the tribal mask to the far right
together with the heyday pop culture mini soda cans in the middle to
the general diner style, locally interpreted, in the seating
arrangements. I have no idea what I just said but it sounds pretentious
as fuck and confuses me something awful after I wrote it. ;)

Anyway, back to the food, the RM 5 set lunch promotion is a main
dish with fried rice, a side of veggies and an egg. There are several
options to choose from, namely: 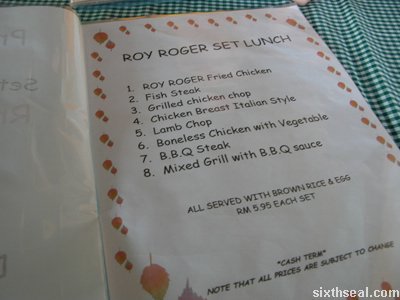 All served with brown rice & egg.

I also noticed that the usual retail price is RM 5.95 which makes
the new “RM 5 set lunch promotion” not that big a deal since it’s just
a mere 95 cent reduction in price. 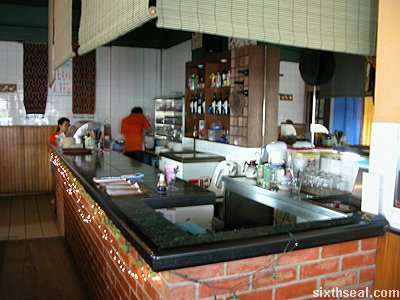 Nevertheless, I opted for the B.B.Q Steak and my coworker had the
Roy Roger Fried Chicken. I also had two glasses of coke (the drink)
float. The food turnaround was quite fast since the place was nearly
devoid of customers even during peak lunch hour. It took about 10
minutes or so for food to appear on our table. 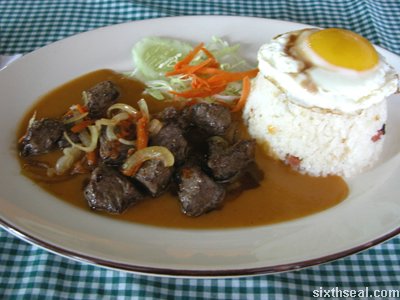 This is the B.B.Q steak option. The word “steak” is grossly
misleading – I would not call the minute baby-bite-sized pieces of meat
“steak”. I would hesitate to even describe it as “chunks” and to call
this “steak” would require a huge stretch of imagination. That, or
false advertising.

The dish does taste good though, if it were not overshadowed by the
magnificent Roy Rogers chicken (more about that later). The “BBQ Steak”
was infused with delicious notes of wine, leaving a wonderful
aftertaste. The brown rice had bits of ham in it and the runny sunny
side up (just the way I like it!) egg was perfect. And my psychiatrist
told me to work on my (over)use of superlatives. 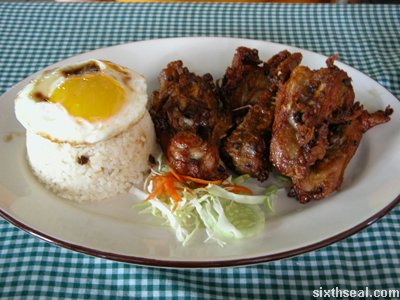 The Roy Rogers Fried Chicken option however, was truly great. This
is the one my coworker ordered and I helped myself to some of the
chicken from the generous portion. The chicken is fried to perfection
and it was peppered with…er, black pepper. It came out piping hot and
crunchy, and the whole black pepper seeds provided a wonderful
mouth-feel and interesting textures when eaten with the rice.

I’m afraid that I must stop now, before I undo years of therapy. All
kidding aside though, the set lunch is a pretty good deal and the food
is good. I recommend the Roy Rogers Fried Chicken option.

Oh, and I saw another table with two working females and noticed
that one of them did not touch her rice at all. I went over and took a
photo when they went to pay the bill and they smiled curiously at me
when they left. 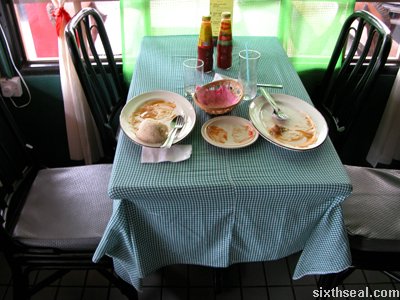