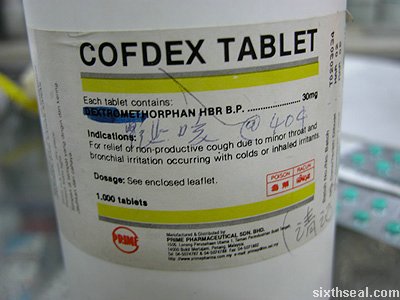 This is a bottle of 1000 Cofdex tablets. It contains 30 mg of
dextromethorphan (DXM) per tablet and is mainly used as a cough
suppressant. However, DXM has a cult following due to its remarkable
NMDA antagonist effects. It’s used recreationally by people who like
psychedelics or just a good old mind fuck. I would describe the
experience as a cross between ketamine (another NMDA antagonist) and
acid (LSD). I usually take 20 tablets but you need to calculate your
body weight to know what dose will push you to the trippy third plateau.

The interesting aspect of DXM is that it brings you to different
plateaus, with each one giving you a different experience, depending on
the dosage (which is calculated by body weight). I’m about 56 kg so 600
mg would put me to the third plateau, which is the one I always aim
for. I didn’t like DXM the first time I tried it, I thought it didn’t
give me much effects. The same goes for the second time. However, it
put me into a very heavy trip the third time, where you can see my thought process on DXM [sixthseal.com]. That post was written under the influence of DXM. It’s a real mind fuck.

It’s hard to obtain Robitussin DX here and pure DXM tablets are hard
to find too. You do not want antihistamines or pseudoephedrine in your
dose if you’re aiming for a high plateau. I was surprised to find that
my pharmacy friend has a bottle of it and I got it off him for RM 150.
We didn’t count the tablets; I just offered him that price by looking
at the remainders. It turned out to be more than 300 tablets. I take
DXM occasionally when I want to learn something or just trip. 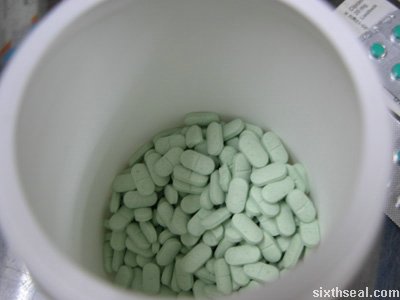 The trick to getting effects from DXM is to fast (don’t eat
anything) for at least 18 hours beforehand and then dump the whole load
at once. Otherwise, it’ll just give you a slight puzzling drunken
feeling, and not a full out trip. This one need an empty stomach for it
to “work” and you need to “hold it down” i.e. not throw up. 😉 I only
learned that during the third time I tried it.

DXM is not commonly available in Malaysia – the cough suppressant of
choice is codeine, but if you see DXM HBr (without other active
ingredients) and you like ketamine, it feels something like that – with
less euphoria and more mind fuck. 🙂