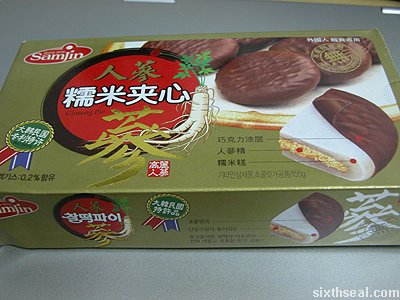 Samjin is a South Korea based confectionary manufacturer which has a
line of Choco Mochi Cake as their signature line. Mochi is a made with
glutinous rice and comes in a deliciously chewy texture. It’s a
traditional Korean and Japanese snack. 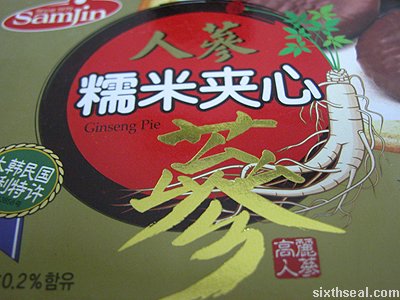 My parents went to Korea for a vacation recently and bought back
several packs of Samjin Choco Mochi Cakes. It’s supposed to dominate
the market share in mochi confectionary in Korea. My favorite one is
the Ginseng Mochi Cake. 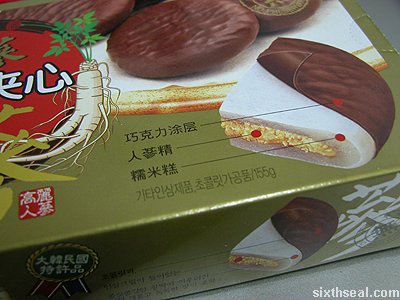 Ginseng Mochi Cake comes in a box containing five individually wrapped packs of the “Ginseng Pie”. The promotional spiel goes ‘Ginseng
Mochi Cake’ is enhanced in its taste as inserting Ginseng cream mixed
with extracts and powder from world famous Korean Ginseng in a rice cake, which doesn’t exactly make much grammatical sense. 😉 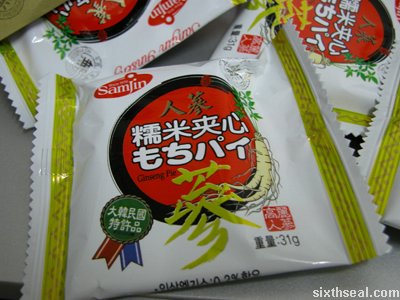 Samjin products are currently only sold in souvenir shops in Korea
and it’s surprisingly addictive. I’ve had the regular ones and the
Ginseng ones and while both have a wonderful chewy texture that makes
it impossible to eat just one, I like the Ginseng Pie better. 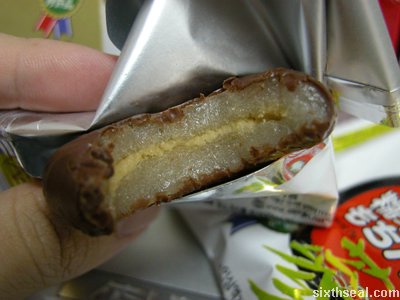 The interesting thing about Samjin Choco Mochi cakes is that the
chocolate is beige and crumbly…there’s a filling covered by the chewy
mochi and covered with chocolate. The Ginseng Mochi Cake has Korean
Ginseng added. I brought several boxes over and realized that I’ve
absently eaten one after another continuously…it’s really that good!