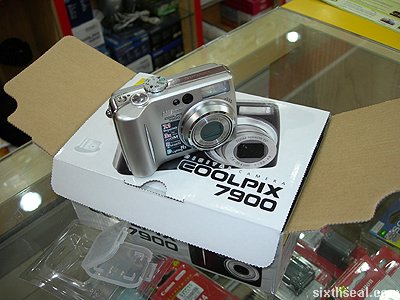 I just bought a Nikon Coolpix 7900 (the March 2005 newly released
model) two days ago for RM 1,888. My primary digicam, the trusty Nikon
5700 has been out of commission for a while due to a CCD malfunction. I
love that camera, it has a nice solid weight and the features are
great. It also looks good – I’ve always preferred black magnesium alloy
SLR type bodies to the silver ones for practical and aesthetic reasons.

Alas, it had to be sent to Nikon in PJ to be fixed coz every picture
that I took had chroma distortion at the top, so I figured it’s
probably the CCD sensor. I’ve been looking around for another digicam
while I wait for the 4 week turnaround time and decided upon the 7.1 MP
Nikon 7900. I’ve been waiting for it for a week, and no one in Kuching
had any, until I went to Hock Lee Center on Sunday and saw one on
display. It just got in that very morning.

Unfortunately, I had also seen the Sony Cyber-shot DSC V3 7.2 MP
digicam which looks a lot like my trusty Nikon 5700, except the Sony is
slightly smaller. It retails for RM 2,588, and did I mention that I
love black SLR-type magnesium alloy digicams? I’ll put on my flame
retardant suit and share the reason behind this – the silver digicams
looks cheap and unprofessional. I’m sorry; it just had to be said. 😉

Thus, I was caught in a predicament – should I retain brand loyalty
and go for the Nikon 7900 or should I get the Sony V3 which looks
fucking great and is only a RM 600 difference? Did I mention the Sony
can take CF Cards too? I don’t know if I mentioned this before but the
Sony V3 also has the SLR-type magnesium alloy body like the Nikon 5700
that I have and I love these d-SLR type digicams. It’s like a digital
SLR…except you don’t need to lug expensive specialty lenses around
and worry about breaking that RM 10,000 lens.

I’ve always gone for Nikon digicams (the 7900 is my third) due to
the stellar macro performance (people always ask me how I manage to get
such detailed pill shots) and also coz I have three CF Cards, two
EN-EL1 Nikon batteries and two chargers. Plus, I like Nikon. That was
before I handled the Sony DSC V3 though…and I just couldn’t decide
which one I should get. Actually, I had already decided to go for the
Sony, but I had to consult my gf, coz apparently, my finances are
audited by her. :p

She had very sound advice – go for the Nikon 7900. It’s technically
an upgrade since its 7.1 MP compared to the Nikon 5700’s 5.1 MP. The
other reason was because (and we’ve discussed this before) I already
have a d-SLR type (she calls it “bulky and unwieldy”) digicam (the
Nikon 5700), which is due to come back from repairs soon. Thus, common
sense dictates that one should own a “main” digicam (that would be my
Nikon 5700) and get a new “portable” one instead (which would be the
Nikon 7900).

It does make sense…there’s no point having two d-SLR type cameras
to lug around when you can have one to carry around and a portable one
to…well, pocket. Thus, I got the Nikon 7900. It’s a new release, it
just came out this month and it has a lot of new features, most of
which I find annoying, like the blurred shot warning (be damned if a
digicam starts to nag me). It’s pretty much useless except for newbies
coz experienced photographers would know a good shot from a bad one
right away. There is also no “burst photography” (rapid fire continuous
shots for a limited amount of time to increase the probability of
getting that hard to shoot scene) mode unlike my Nikon 5700 (which
photographers like for various reasons ;)) since it can only manage a
paltry 1.7 fps continuous.

The Nikon 7900 has some amazing features though – like the 2.0 inch
amorphous silicon TFT LCD screen. Fuck, that screen is HUGE. It’s also
clear, detailed and bright as fuck. I couldn’t believe my eyes when I
saw it. The size is awe inspiring as well – it’s 120 x 57 x 69 mm.
That’s the exact size of a pack of cigarettes. The
Nikon 7900 is portable, alright. If you can carry a pack of Marlboros,
you can slip a Nikon 7900 in and you won’t even notice the difference.

The neutral point of the Nikon 7900 is that it doesn’t get a second
glance from passer-bys. Everyone and their grandma (and her pet cat)
own a digicam nowadays, and this looks just like the miniature ones
that are flooding the market nowadays. I don’t feel like I’m covering
an event when I use it, unlike the large Nikon 5700. It’s good for a
compact digicam in a sense…it attracts less attention. It also
attracts less respect. It can be argued that only true d-SLRs command
the respect they deserve, but we’re not going there due to budget and
practicality issues.

The downside to the few days I’ve been using the Nikon 7900 is the
weight of the digicam…or rather, the lack of it. I’m used to the
comfortable weight (more than 1/2 kg) of the Nikon 5700 (bought it at
RM 3,100 and have been using it for two years, daily) and the
featherweight Nikon 7900 (about 180 g) requires delicacy during
operation, a trait I do not possess. I also didn’t like the shallow
“grip outcrop” to the right of the digicam after using the solid grip
of the Nikon 5700 for so long.

The best feature of the Nikon 7900 is the new “Face-priority AF”
function which does facial recognition and focuses on faces and people.
Nifty. The movie mode can record 640 x 480 @ 30 fps (unlimited) which
is great – it’s an upgrade from the Nikon 5700. It also has “Electronic
Vibration Reduction” which seems to work. I can see myself using the
two different digicams for different situations.

The other good thing is that there’s no learning curve to speak of –
once you’re familiar with a Nikon digicam, you can operate any Nikon
digicam without problems. I still have to practice being gentle with
the Nikon 7900 to avoid blurring the shots due to the light weight, but
that would come in time…and I definitely need to turn off that damned
Blur Shot Warning indicator.

Plus, the Nikon 7900 TTL is fucking amazing too – I strap it to my
belt using the original leather pouch (which looks pretty good
actually) and the opening mechanism is magnetic in nature. That,
combined with the dangling strap I keep allows me to tug on the strap
to snag the 7900 clear of the magnetic clasp while hitting the
appropriately placed power button and the Nikon 7900 boots up and is
ready to go by the time the digicam is leveraged into the right hand
(I’m right handed) via the strap rebound.

TTL (Time to Live) is a speedy 2 seconds, faster if it’s in standby
mode (so it doesn’t have to go through the Nikon intro which takes a
second).

How fast is that? Well, I’m not going to post a photo, but there was
an incident at a certain escalator at The Curve which is of an
ephemeral nature, and I managed to whip out the Nikon 7900 and caught
the scene in time. I’ll leave you to think about the nature of the
scene, but I’m telling you, the TTL is fast. 😉

I also liked the new D-lighting feature which adds detail to dark
areas of the scene composition. *cough* This feature alone justifies
the upgrade. The huge 7.1 MP photos that comes out at 3072 x 2304 gets
a big thumbs up from me too. I got a 256 MB SD Card with the purchase
of the camera, and I have another SD Card around but the other great
thing is the Nikon 7900 also has internal memory so you can take shots even when the SD Card is not in.

Imagine this scenario – you’ve just filled the SD Card and you’re
swapping it out when this shot of a lifetime comes along and there you
are, stuck in between reloads! Well, I can say without any shame that
the recurring nightmares that I have regarding this scenario is a thing
of the past. 😉

The nightmares that I’ve been having has now morphed into dream like
sequences where I just drop the SD Card, fuck reloading, point the
digicam at that shot-of-a-lifetime and press the shutter button and I
get the shot, all due to the internal memory of the Nikon 7900. I can
sleep easy now. Thanks Nikon! 😉 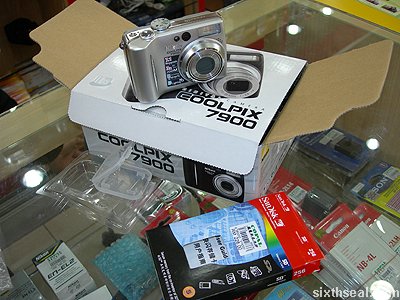 It’s definitely a great buy, but I’ll wait till the price drops if
you don’t need one right now. RM 1,888 is a little steep for a consumer
grade digicam. I still love it though, it’s pocket able so I won’t have
to strap my sling bag, which I’m told is a fashion faux pax when I’m
wearing a coat. 😉

I like the leather belt strap though…that’s how I’m carrying it now.