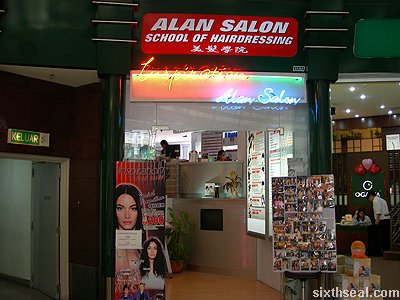 Inspiration Alan Salon or Alan Saloon School of Hairdressing
as some calls it, is located at Hock Lee Center. I desperately needed a
haircut before I go to KL next week (business trip) to avoid looking
like a “drug addict” as my mom likes to bring up every time I go back.
I headed to my usual hair salon (Empire, Wisma Saberkas) but they don’t
open until 11 am. I needed to sort out a couple of things with my
project (which is why I’m in the office right now) so I decided to try
Alan Saloon of Hairdressing. 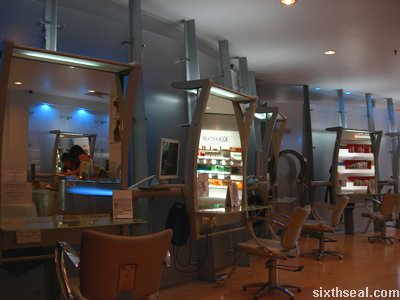 The first thing that strikes you as you enter Inspiration Alan Salon
is the tastefully designed interior with subdued lighting. It was like
stepping into your personal hair stylist room, like Kenny mentioned.
There are no glaring lights anywhere in the salon – it’s all about
subtlety here… 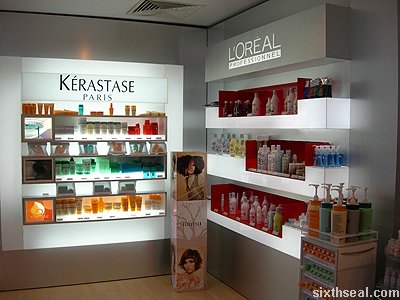 There is also the standard product promotional tie-in displays at
Inspiration Alan Salon as well, but this wall mounted one is very
aesthetically pleasing and blends in well with the surroundings – it
doesn’t look garish like other hair saloons. 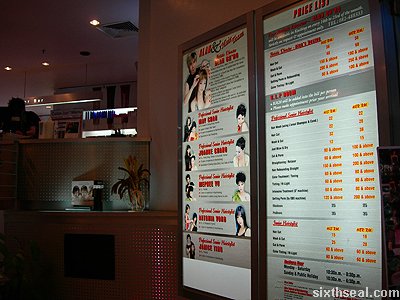 There is a resident hairstylist signboard mounted on the entrance as
well as their working experience and a photo of them in action. I
believe this is the first time something like this has been done in
Kuching. I was looking at the photos to see which hairstylist I wanted
(yeah, yeah, I’m a typical male pig, I go for the good looking one :p)
but did not see any noteworthy ones (which I later found out was the
photographer’s fault, coz some of them are fine ;)). 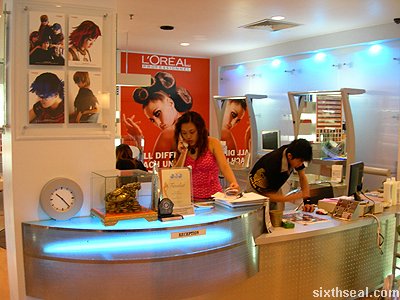 I went up to the counter and asked about the hair stylists on duty
today. The counter girl told me that she’ll assign a free one to me and
told me to take as seat and make myself feel comfortable. “No way,
Jose,” said I. I’m going to choose who’ll be the one to fuck around
with my hair (the one upstairs, for those of you with your minds in the
gutter ;)). She hesitated before politely informing me that they
usually like to train the junior hair stylists. 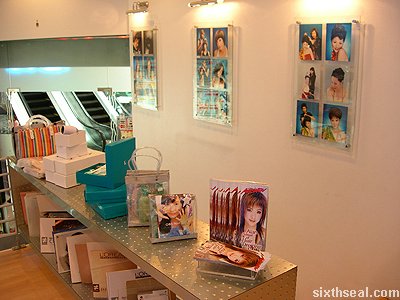 I asked her who the junior hairstylists are…and she told me there
were five of them. I didn’t want to waste time beating around the bush,
so I straight out asked her whether they are male or female. 😉 I’m
used to getting *cough* female treatment, so to speak, in Empire and
I’m not going to change that. She looked at me kinda strange and told
me that the only females in-house right now are the resident
hairstylists. 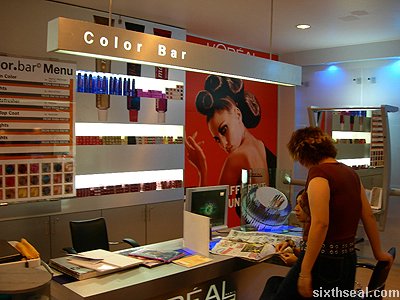 I asked to look at them in person coz I wanted to choose the one to
cut my hair. I can be a very demanding customer in certain aspects, as
you can see. 😉 That caused another puzzled hesitation before she
complied and let me into the back room. I only saw one aesthetically
pleasing hair stylist there, so I said I wanted the one in the white
top to cut my hair. 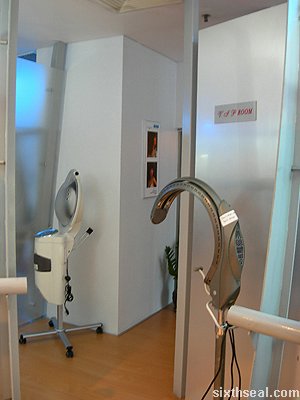 I also told her I’ll take the mysterious VIP room (which costs an
additional RM 20) and she ushered me in personally. I had been
wondering what this “VIP Room” has that makes it special enough to
justify an RM 20 extra… 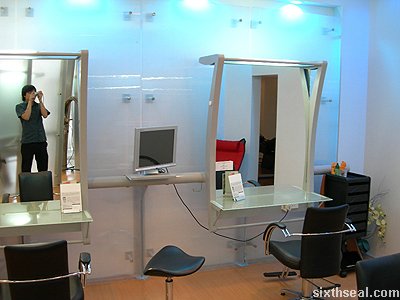 …and I found out that it’s a partially enclosed room with only two
seats for maximum privacy. There are also plush seats at the back of
the hairdressing seats for companions and a personal LCD screen for
each of the two chairs so you can either read magazines or watch MTV.
My hairstylist later told me that the VIP room is usually used for long
procedures like hair coloring and hair straightening procedures. 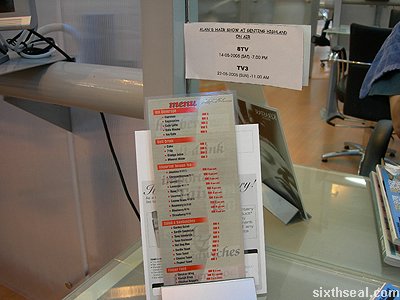 I also noticed that they have a menu for drinks and food and I was
told that VIP room patrons get a complimentary drink. I ordered the
Cafe Mocha. There is also a notice announcing Alan’s Hair Show at Genting Highlands which will be aired on 8TV and TV3 later this month. Jesus, and I thought I’m a narcissist. 😉 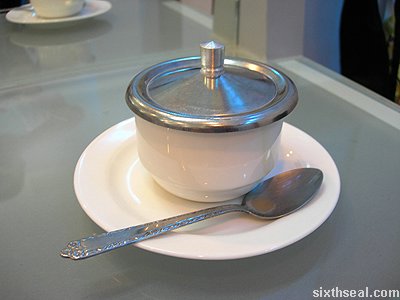 This is the Cafe Mocha that was served soon after. I thought the
stainless steel cover spoiled an otherwise perfect implementation… 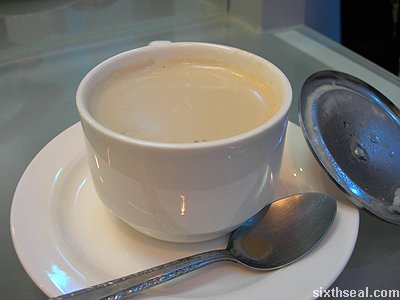 …and this is the Cafe Mocha in question. It was hot and creamy,
but they really need to brew it with higher caffeine content. I thought
it was decaf, for Christ’s sake… 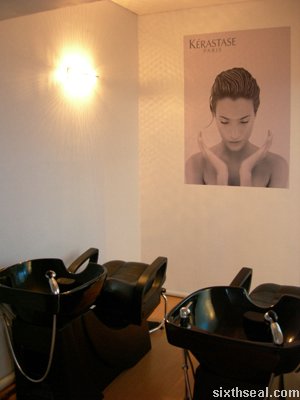 I went for a Wash and Cut (RM 32) and a person of the male
persuasion came in…and I told him there must be a mistake coz I got
someone else to do my hair. He assured me that everything is in order,
it’s just that the senior hairstylists there makes the junior
hairstylists do all the hair washing…I’m not even going to go there.
I’m still traumatized by being touched everywhere (on my scalp, lar) by
a guy for 30 minutes… 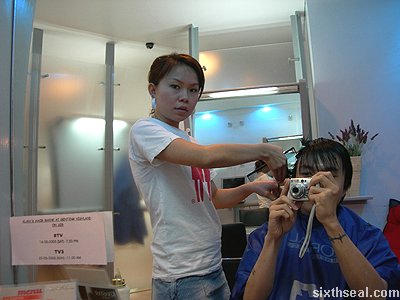 My hairstylist, Antonia Yong, who is one of the resident
professional senior hairstylists there came in later and had a
discussion about how we’re going to make my hair look like by the time
I step out of Inspiration Hair Salon. She was kind enough to pose for a
shot while I took it from the mirror. Antonia, these are my readers,
dear readers of sixthseal.com, this is Antonia. 😉 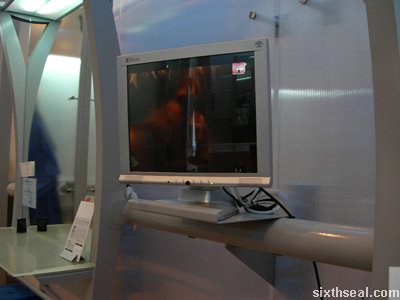 I had the option of watching the LCD screen showing MTV that the
counter attendant activated for me. She asked me which channel I
preferred, and I told her MTV is fine. 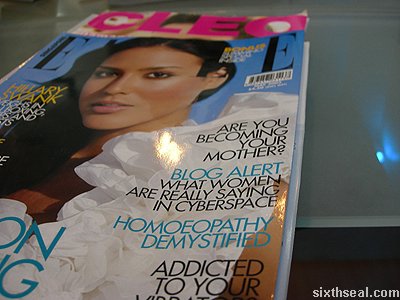 She also put a stack of the latest magazines on the table in front of me…and this is an interesting bit about blogs. Hah! 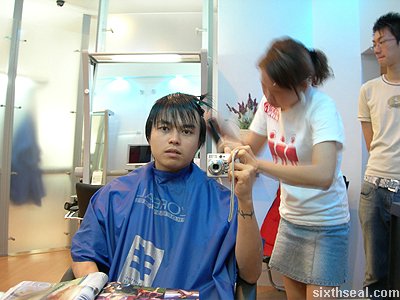 This is Antonia Yong doing her magic on my hair…and the person to
the right is the guy that’s waiting to re-wash my hair. Please don’t
worry about me, I’ll get over it with enough counselling and
support…and I know I look half-asleep – it’s 10:30 am on a Sunday for
God’s sake. :p 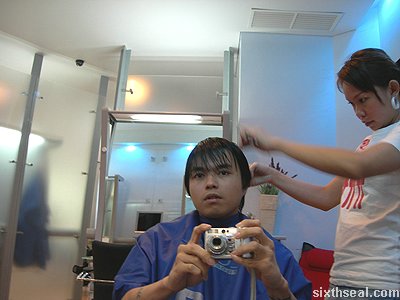 Anyway, I thoroughly recommend her services if you’re in need of a
haircut. She’s real friendly (something I find attractive) and…well,
just take my word for it, you’ll enjoy it AND get a good haircut at the
same time. :p 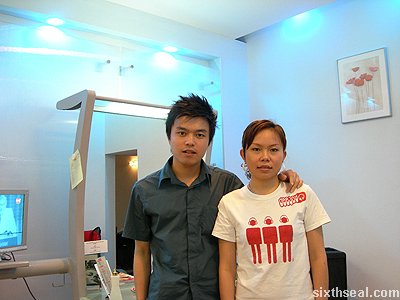 This is me and Antonia at the end of the session. I like my hair to
hang down, but she insisted that it looks better like this. Oh well…

Antonia told me that they’re opening up a new branch at Sarawak
Plaza, so look out for that. The total damage to the wallet from the
hair wash and cut is RM 32. I told the cashier that I took the VIP Room
so there should be an additional RM 20 charge for that, but she said
it’s alright since it wasn’t booked or occupied at that time. That’s
very nice of them, and I got a free mocha to go with it too.

Inspiration Hair Salon gets two thumbs up from me, both for service and quality.