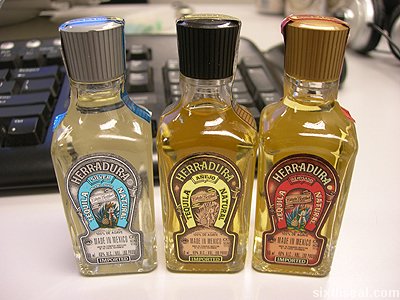 Herradura is one of the premium tequila brands from Mexico and is considered by many to be the best Mexican tequila in the market. It is near impossible to get it over here in Malaysia, but the Cooknengr [cooknengr.com] himself passed me the range of Herradura all natural 100% blue agave tequila samplers bottles the last time he came back from the United States.

Herradura Silver
This tasted spicy, with strong hints of pepper (?) which lasted into the after taste. Herradura is a great, high quality tequila – it’s not something you down with a chaser. Herradura Silver is the lowest range of tequila (aged for just 40 days) from the legendary Herradura estate and it still beats other tequila brands by a long shot (no pun intended).

Herradura Anejo
Herradura Anejo is aged for 2 years (one year longer than the Mexican government regulations before a tequila can be called “Anejo”) and this aging process translates well to the tequila. I never expected tequila to be aged like other premium liquors, and I was pleasantly surprised. The dark rich golden tequila imparts an oak aged flavor (and a bit of a bite) to the palate. It’s great!

Herradura Suprema
The Herradura Suprema range is the top shelf range of tequila from Herradura and it comes in a slightly different bottle design. Unfortunately, it was lost in transit (read: someone else drank it) so I’m unable to compare this to the other three tequilas from Herradura. I was not exactly sober that night and I think someone nicked it while they were looking at the bottles. Damn it, they just had to take the best one. :p 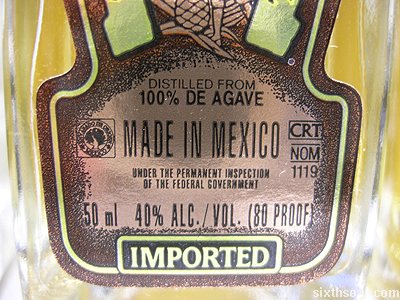 The Herradura (which means horseshoe) range of tequilas is a great sampler of tequilas – it’s quality tequila made from 100% blue agave that’ll forever change the way you view tequila. Tequila isn’t just a liquor to drink in shots followed by chasers (that stereotype probably originates from cheap tequila) but can be a great flavorful liquor that can be enjoyed by sipping it neat.