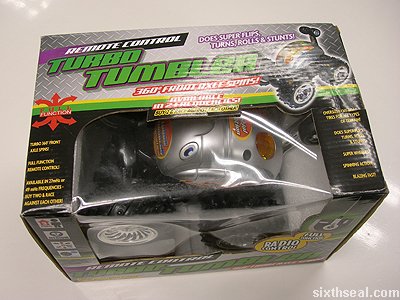 Remote Control Turbo Tumbler is basically an RC car that can do “stunts” like flips and rolls due to the six degree freedom of movement controller and 360 degree front axel on the RC car design. It comes in 27 Mhz (Orange) and 49 Mhz (Black) for two-person “racing” although I doubt the RC car is designed for that with it’s bulky SUV (4WD) looks. 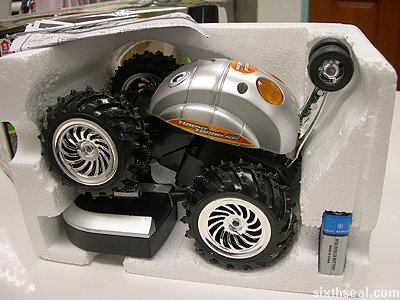 RC Turbo Tumbler comes in a package which contains the fully assembled car and the remote control module with antenna (batteries not included, of course). The car has a “Special Edition” sticker on top (am tempted to write racing stripes but that would be a gross misnomer) and several light fixtures which comes on when the RC Car is powered up. The instruction sheet is basic but it doesn’t require a Phd in Rocket Science (or Nuclear Physics for that matter) to operate an RC Car. 😉 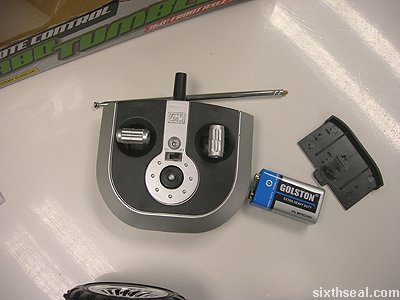 This is what the 27 Mhz controller for the RC Turbo Tumbler car looks like – this one does come with a 9 volt battery, bless their souls, coz that funny shaped battery is hard to find in the office. It is simple to integrate, with just the battery cover going into the controller and the snap in antenna (retractable) to boost the signal strength. 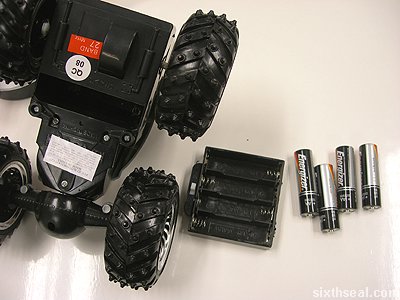 The RC car itself requires 4 x AA batteries (which thankfully is in amply supply inside the office) loaded into a peculiar cartridge loading system which slots back into the undercarriage of the car. 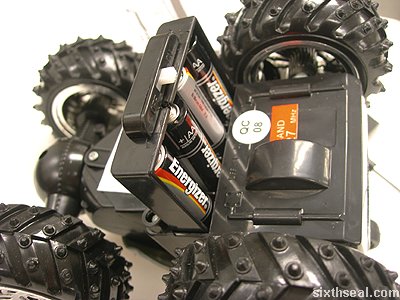 Here’s a shot of how the battery array loading system looks like – the RC car has large grip types as you can see, which makes it more of a stunt car than a proper racing RC car. The entire package is ready to go at this point if you have AA batteries on hand. 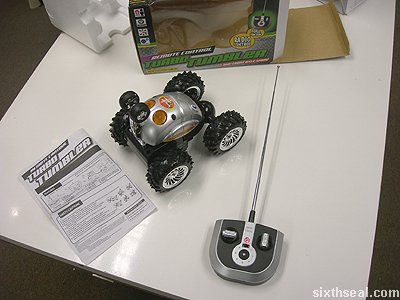 The Remote Control Turbo Tumbler is “Made in China” and that means that it doesn’t last. It is manufactured from poorly sourced materials and one of them didn’t work (the one that my CTO got) so I gave him mine, which promptly broke in two days. It is however, fun for a day.

Watch the video of the RC Turbo Tumbler at work in the office: 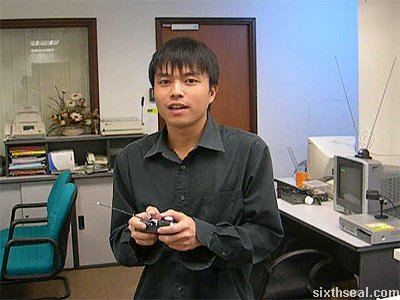 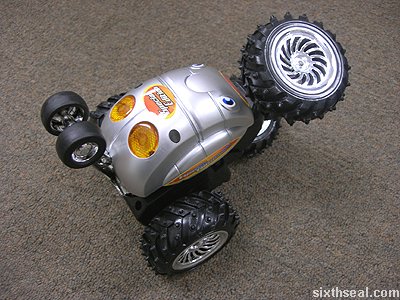 That’s me testing the RC car in the office while my CTO is manning the camera after work just now. Take Two in the video refers to the botched Take One where the RC Turbo Tumbler didn’t function at all – there’s “Made in China” for you. 🙂