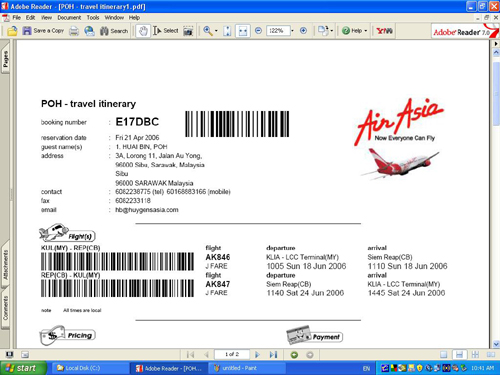 I had planned to go to Siam Reap in Cambodia tomorrow – the tickets were booked through AirAsia a couple of weeks ago on a promotional fare. I wanted to check out the Angkor Wat (which is closer to Siam Reap than Phnom Penh, the capital) and perhaps smoke some old skool opium if I manage to find an opium den. 😉

The trip was supposed to be for one (1) week – and I wanted to check out Phnom Penh as well, using their internal transportation services, just backpacking, roughing it out a bit.
(and smoke some opium in an opium den)

Alas, the trip was not meant to be coz one of our projects starts next week and I’m heavily involved in that project, thus I cannot take leave. AirAsia does not have a refund policy (they are a low cost ticket less airline, much like Virgin Blue in Australia) so I’m scrapping this trip. I’ll go again some other time.

In other news, I won back the cost of the tickets to Cambodia last night alone. 😉

It was an absolute trashing mate! =D I knew the game was in the pocket when the result was 3-0. 😉 I won RM 300 from this match.

It rose from 2-0 to 2-1 so this one is also in the bag for me. 🙂 The half-ball concept is not that difficult to understand – basically, the team conceding the “half-ball” means you lose if the result is a draw (since there’s a 1/2 goal handicap for Netherlands) but if the team wins by even a single goal, you win all. I won RM 300 for this match as well. 🙂

I won a total of RM 600 last night. That covers my Cambodia trip costs (plane tickets) that were not meant to be. 🙂

1 thought on “Next stop: Cambodia”