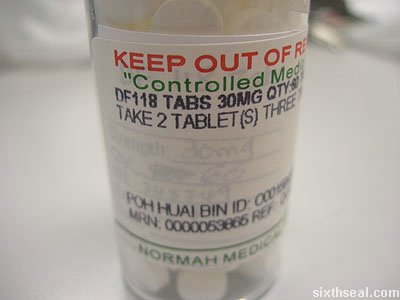 My doctor reads my blog and I screwed it up big time with the Duragesic post…I’m not getting any fentanyl patches coz “it would be gross negligence for me to prescribe it to you after all I know”. Which is fine, seriously. I’m cool with that. Everyone has an ass to cover and you’re doing just that. It’s cool with me. 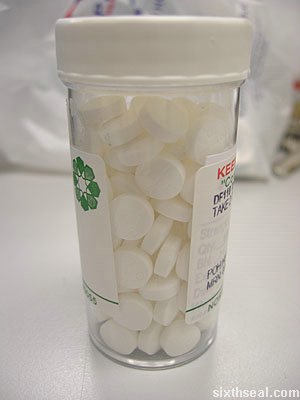 Thus, we entered discussions of what a secondary taper plan would be (dammit I should not have written about fentanyl that day :p) and we discussed morphine (MS-Contin 30 mg) which he nearly prescribed before thinking twice and just decided to fall back on Old Faithful (DF-118 not OxyContin, the latter causes a lot of phone calls for verification and takes about 1 hour to process). 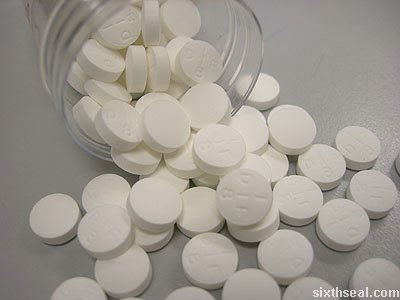 I told him I’m serious about quitting and told him my actual maintenance dose (which is at least 30 tablets of DF-118 (900 mg of dihydrocodeine) which is equianalgesic to 270 mg of MS-Contin (about 9 tablets of 30 mg morphine) which didn’t shock him much, being my old doctor and that (and partly why he dared to put me on Duragesic fentanyl patches in the first place, I would have OD if I didn’t have an opiate tolerance).

He gave me one last prescription for DF-118 (120 tablets) staggered by 10 days (basically a dated repeat Rx script) authorizing 60 tablets today and 60 tablets 10 days down the road. He basically put me on DF-118 30 mg x 2 (60 mg) three times a day (240 mg per day). That is not enough to even stave off my withdrawals so I had to renegade on my promise and despite this being the last prescription, I think I’m going to take it (in a non-recreational but non-withdrawal inducing manner ;))and then go on methadone.

You can tell I’m not serious about quitting. 😉 Like I said, I’ll quit when I’m good and ready, hey, I smoked and injected crystal methamphetamine for several years (abusively and compulsively) and quit just like that *snaps fingers*. I’ll do that same with opiates…when I’m good and ready. I’m thinking about Methadone Replacement Therapy (on the condition that only my opiate problem is being treated and not my benzodiazepine issue) when I run out of opiates from the Sibu Connection.

Me: Can I get both the prescription filled, so that I can have 120 tablets instead of just 60 tablets and come back again in 10 days just to refill the script coz this place is kinda far from where I stay?
(after calling my doctor to verify the script, oh boy, he must not be happy to hear I’m getting all 120 at once)
Pharmacist: Sure, I’ll make that arrangement for you.
Me: Thank you very much, I appreciate that.
Pharmacist: So you took time off work today?
Me: Nope, I had a client somewhere near here so I just happened to pass by.
Pharmacist: You must be pretty hardworking.
(wondering wtf that question meant)
Me: Well, I get the job done.
Pharmacist: Where do you stay?
Me: Tabuan Jaya.
(which is not really where I stay)
Pharmacist: Yeah, that’s a bit far.
Pharmacist: Anyway, the prescription is ready. 120 tablets of DF-118.
Me: Thank you very much, I always get a lot of problems with cashing in the script due to the nature of the medication.
Pharmacist: No problem. Glad to be of service.
Me: Thanks! You have a nice day, now.

(at the prescription counter)
Pharmacist #2: Mr. Poh?
Me: That’s me.
Pharmacist #2: 120 tablets of DF-118. Wow, do you mind me asking what ailment you’re suffering?
Me: I have a bad back and migraines. I’m opiate tolerant so the basic NSAIDs and triptans don’t really work on me.
Pharmacist #2: Really? What were you on?
Me: Well, I was put on Paralgin Forte (a 30 mg codeine preparation) at a very young age.
Pharmacist #2: *nods unconvincingly*
So who is you primary care doctor?
Me: (uh oh, I have scripts from literally dozens of doctors cashed in this fine medical facility) Well, it’s Doctor X (who died from cancer).
Pharmacist #2: Okay. We’re not supposed to give out so much DF-118 at once but we’ll make an exception this time ok?
Me: Thanks, I appreciate that…and do you know that you’re the only place to stock DF-118 in Kuching? (That’s me getting all chatty and shit) Timberland, they have morphine and fentanyl only. Kuching Specialist, they only carry morphine and Duragesic.
Pharmacist #2: Really? Why don’t you try those instead?
(wtf?!?)
Me: Er…I’m 25, who’s going to want to prescribe me morphine and fentanyl? *smiles*
Pharmacist #2: Oh, okay yeah I get what you mean. Thank you and have a nice day.
Me: You have a nice day too, and take care…and you know what, can you put down a note there that says I’m opiate tolerant, not opiate dependant, just in case, God forbid, I get run down by a car and checks into this fine medical facility, I just want to be on an equianalgesic dose, ya know.
(at this point most of the pharmacists look at me quizzically – some were smiling, some were not – but at least the girls were smiling)

You don’t go eating something that looks like shit, tastes like shit, and smells like shit and go “Mmm…this here is some mighty fine chocolate pie” do you?

…and that girl in the Miri fight video (the assailant with the blue scrunchie) is fucking hot! Can you call me at 013 811 2088 if you’re reading this? I’ll fly over to Miri for some S&M action if you’re up for it. 😉

35 thoughts on “My doctor reads my blog”