Disclaimer: It is to be assumed that this entire post is a work of fiction for insurance purposes. 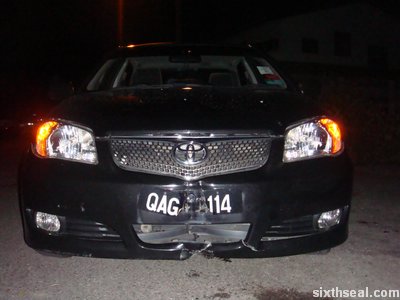 I can reconstruct a partial picture of the night from third hard accounts and other sources. I personally can’t remember much except the vague notion of not being able to find my way out of Rajang Park (a housing estate) and something unyielding attached to the front of my car. 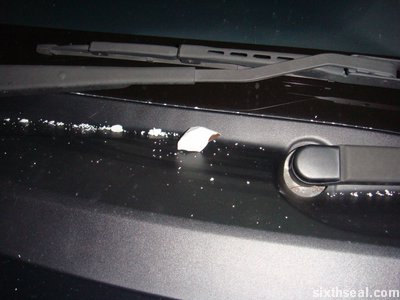 I seem to have run into a lamp post under unknown circumstances and from what I’ve been told, I dropped off one of my friends earlier in the night before she pointed my car in the right direction and told me to take the exit right out. 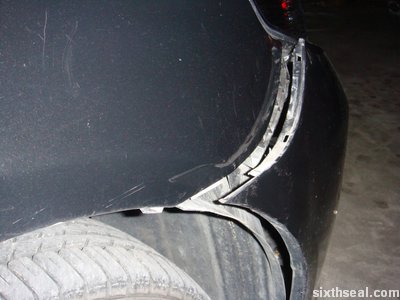 Anyway, 5 minutes later, while attending to her dental hygiene needs, she heard/saw a black Toyota VIOS speeding past the back of her house and crash head on into a utility pole/lamp post. She didn’t see the license plate so she called another one of my friends (since my cell phone battery was dead that night) and told her I might have misjudged a certain turning radius while navigating the corners around her residence. 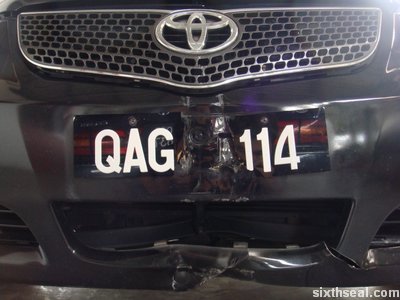 I did remember attempting to switch on my cell phone and calling the friend in question, telling her that I seem to be stuck somewhere around Lane 23 (it was actually Lane 21). She got another friend to drive her there and a couple of minutes later, she told me Lane 23 was deserted and asked me to take my beer goggles off and look at the street sign again. 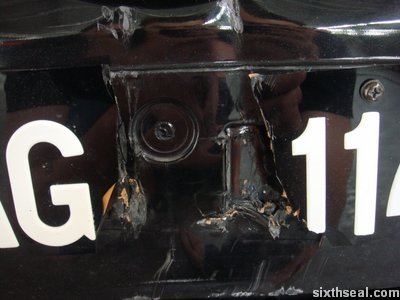 Anyway, long story short, she drove my car (with me in it) home so all’s well that ends well. Except that my car will probably be in the workshop for at least a week – initial assessment says that I have severed a hydraulic cable and they will have to order these parts in. 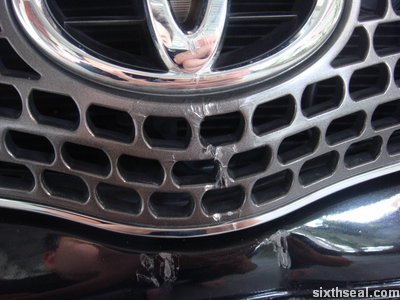 Hmm…I had thought that the all new sixthseal.com would not have posts like this, but there you go. 😉

A: The lamp post is harder. It’s ALWAYS harder.