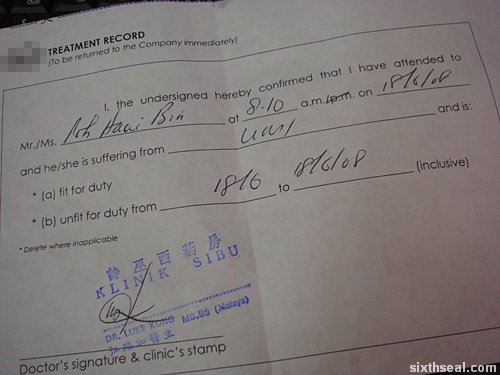 I took a sick day today due to an URTI infection according to the doctor’s diagnosis. I have been coughing really badly for the past few days and getting symptoms of the flu for about a week now. It took a turn for the worse last night when I came down with a fever. I went into work this morning anyway, but felt I was too sick to be there, so I went to one of the panel doctors and he told me I had an Upper Respiratory Tract Infection and put me on a course of antibiotics. He wanted to give me three (3) days sick leave but I told him I only wanted one (1) day since there’s a lot of outstanding work to be done at the office.

I’m not being sanctimonious or anything like that, it’s just that I really enjoy what I’m currently doing in the office right now. I went over to Sandra’s pharmacy and she gave me some hydroxyzine gratis which makes me really sleepy so I’m going to catch some sleep and shake off the fever.

I know that one in three sick days are from people pulling a sickie but I’m seriously ill right now (not as in terminally ill, but feverish). The title of the post doesn’t help, but I just thought it would be funny. 🙂

19 thoughts on “The art of the sickie”