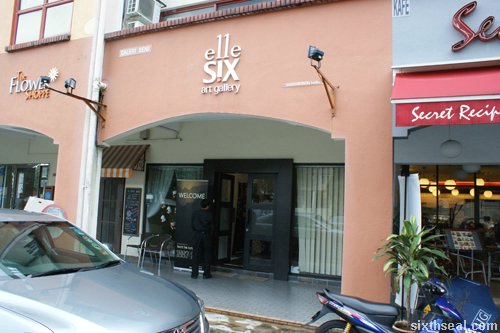 I’ve always been a big fan of single (and available) malt whiskeys. I guess it appeals to the more refined side of me (yes, you have to squint, but it’s there :p). I’ve had Glenfiddich Solera Reserve before and I loved it. Thus, I jumped at the chance when Kim invited me to a Glenfiddich whiskey tasting session. 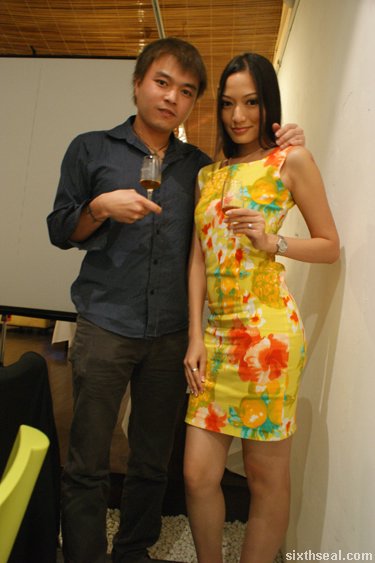 It’s tantalizingly called Glenfiddich – Taste The Future and I was told that we’ll be sampling several Glenfiddich products, including some that are not available in the market (!). How could I refuse and still sleep at night? The ethanol connoisseur in me (no, you don’t have to squint to see this part) arrived promptly at 3 pm to meet up with Mr. Ong (Kim’s dad). 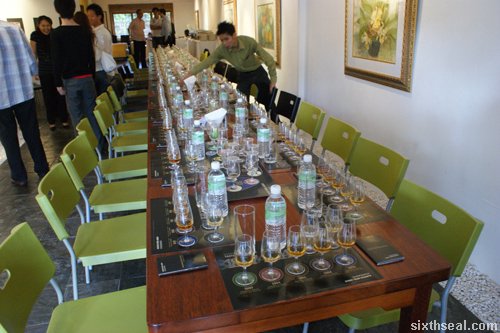 The tasting session was held at elle six art gallery and it was conducted by Mr Ludoviq Ducrocq. I love names I can’t pronounce – Mr Ludoviq Ducrocq is the Global Ambassador for Glenfiddich and he travels around the world to conduct tastings. I want his job. 🙁 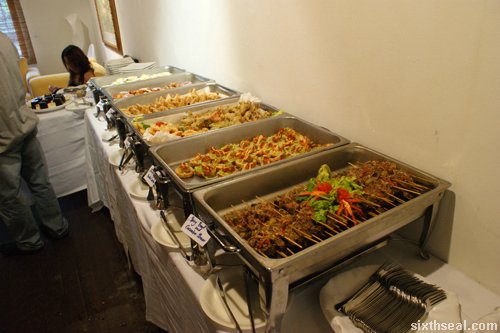 There was a righteous spread of food before the whiskey tasting started. I’m not one to eat before drinking since I like drinking on an empty stomach. Just to torture my body, ya know. 😉 However, I grabbed a plate and nibbled on some food just to be polite. Heh! 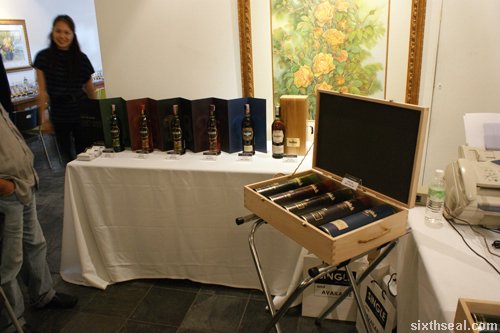 The highlight of the evening started with a presentation by Mr Ludoviq Ducrocq. There were 7 glasses in front of each seat. The glasses were on a paper liner detailing the age of the Glenfiddich single malt. Present in the parade was: 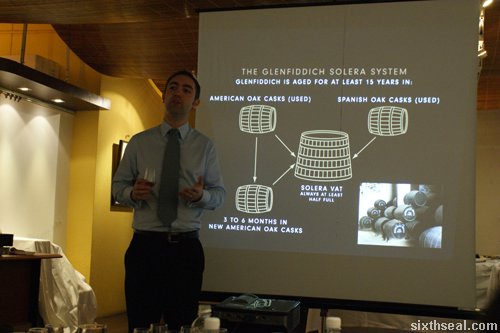 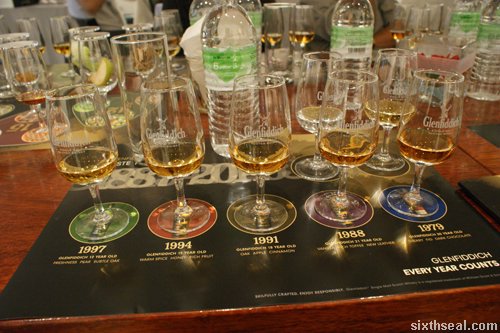 Mr Ludoviq Ducrocq taught us the proper way to taste single malt. You swirl the liquid around and smell it before sipping it. The whisky is rolled around your tongue while you breathe in to capture the notes of the whisky before swallowing. 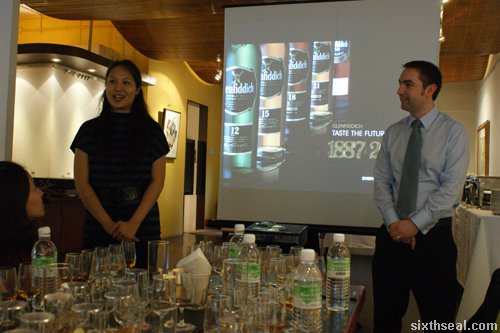 We started off with the Glenfiddich 12 year old and progressed throughout the years. Each time before we taste the Glenfiddich, we were shown a video of what happened during the year the aged single malt was made. 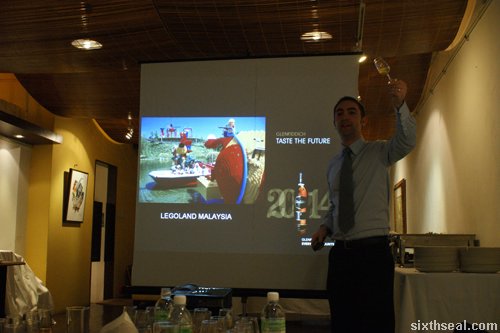 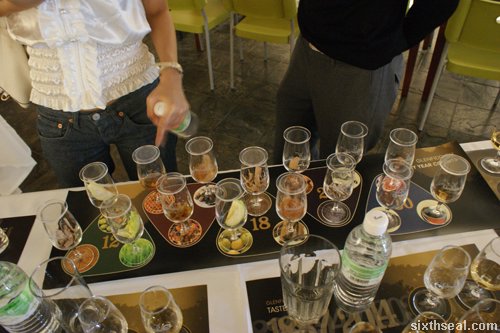 The Glenfiddich – Taste The Future session also had covered items on the table in front of us. The glasses contain items ranging from honey to figs. You’re supposed to compare the single malt with the items so there was a lot of sniffing and touching going on. Okay, that sounded wrong, but you catch my drift. 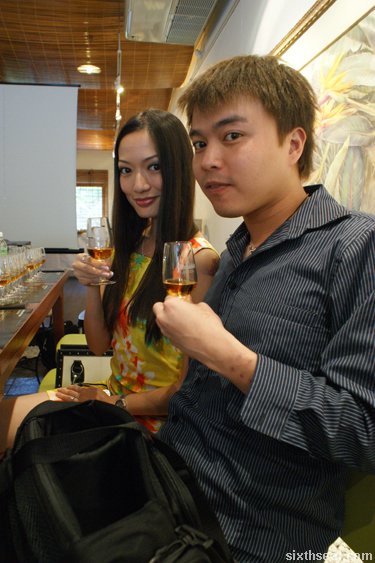 It’s a bit disturbing to actually be able to taste the notes in the whisky…especially the new leather. :S 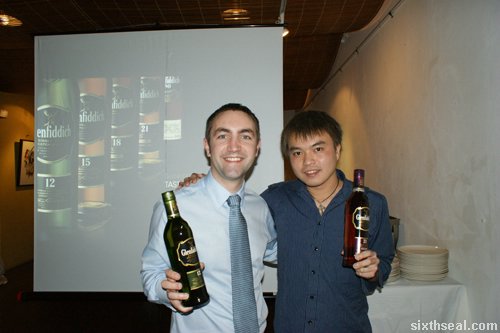 Mr Ludoviq Ducrocq told us to close our eyes and think back to what happened when a particular whisky was bottled. It should be noted that a Glenfiddich 15 year old (for example) could be much older than that – it just means that it’s aged for at least 15 years prior to bottling. 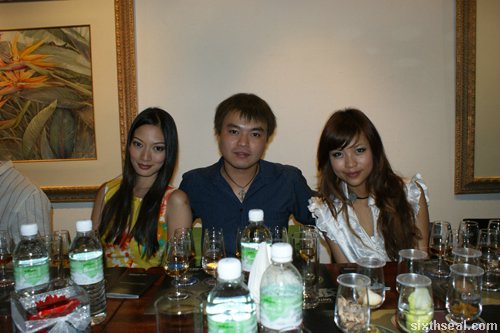 I particularly liked the New Make Spirit. Weighing in at a staggering 70% alcohol, it’s Glenfiddich before it goes into the casks for aging. It has a really strong bite – reminds me of this 95% alcohol I had back in Melbourne. 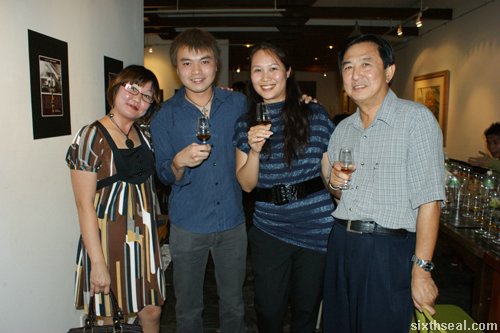 The Future Glenfiddich is intriguing as well. It’s 7 years old and a good 5 years away from bottling. However, you can taste hints of this Glenfiddich-to-be. It’s only going to be sold in 2014 at least so in 2014, when you drink a Glenfiddich 12 year old, I’ll be there to say “Hah! I drank that 5 years ago!” in a smug manner. :p 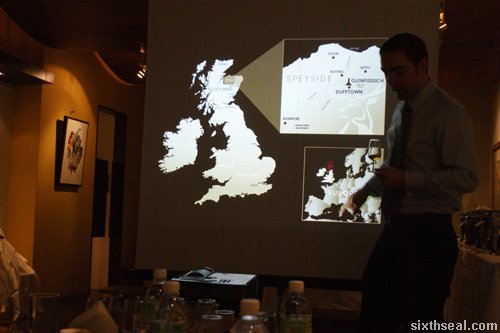 I liked the Glenfiddich
30 year old the best. It has
character and I can appreciate the aging process it went through. It’s as old as my sister and retails for RM 1,430. 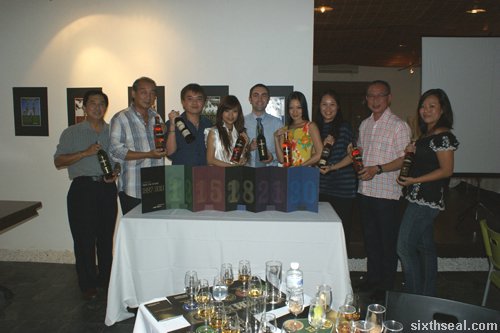 There is also a bottle of Glenfiddich Rare Collection 40 year old on display, which we unfortunately did not get a chance to taste. This bottle retails for an astounding RM 8,455.

I got to hold it though. =D 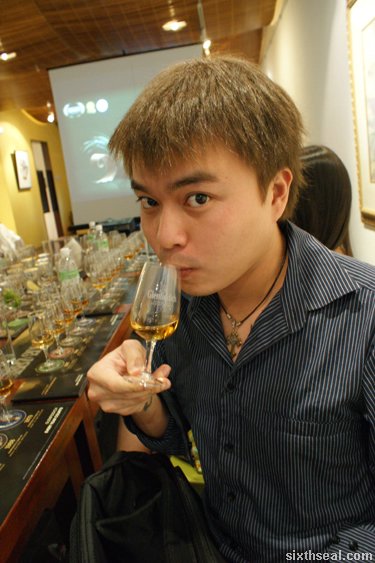 I hear it’s the next best thing. :p

32 thoughts on “Glenfiddich – Taste The Future”