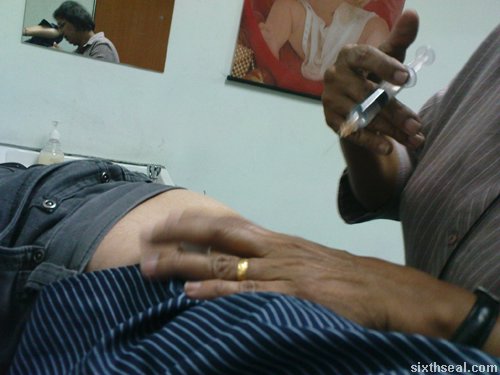 I have been feeling slightly unwell since yesterday, but dismissed it as a particularly nasty bout of gastric (a decidedly un-masculine affliction) and soldiered on. I am rather puzzled though since I don’t get gastric and it’s never been as bad as this.

I went to see a doctor at the prompting (threat?) of a friend after work last night. I went at about 9 pm, just as the clinic was closing, so the doctor just gave me a perfunctory once over and prescribed some unknown tablets. I felt worse when I woke up this morning – acid reflux and the return of the cursed gastric pains with a Super Size Dose of Nausea (TM) so I quickly wrapped up the urgent stuff that was due at work and went to see a doctor at 10:30 am.

I turns out that I have peptic ulcers. The doctor found out coz I puked when she stuck that ice cream stick thing into my throat and there was blood in the vomit. Thus, she jabbed me in the ass and sent me back home…with a RM 60 bill.

Don’t stick that stick down my throat!