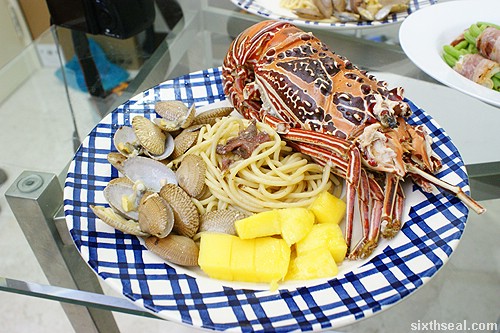 This was originally planned as a yee sang cooking session which somehow mutated into a lobster fest. We were at Cold Storage searching for fish when I saw this awesome looking lobster for RM 59.88. It’s bright, colorful and knobby in all the right places. I stood there marveling at the crustacean instead of looking for fish. I was still staring longingly at it when Eiling came out of the pork section. 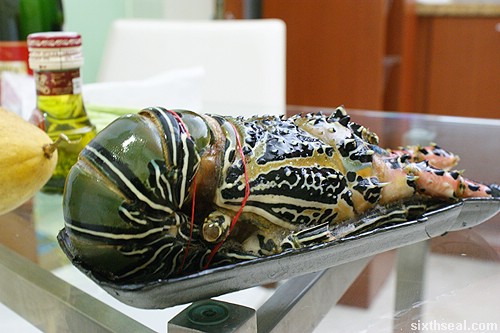 Thus, we decided to forgo the fish and went for lobster instead. I was concerned this wouldn’t fit into my pot and contemplated going for Cambodian lobsters instead. Cambodian lobsters are much smaller than regular lobsters, and doesn’t look like it has a lot of meat in it. There’s a live lobster in the fresh seafood area too, for RM 78 but that monster is definitely too big for my pot. 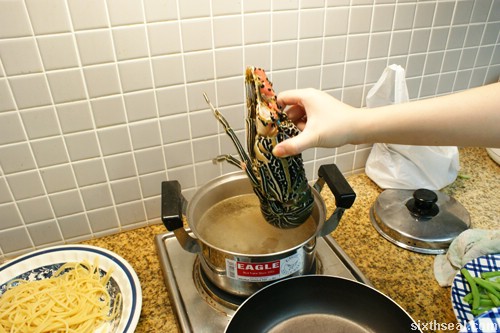 Besides, it’s regular red instead of this wonderfully hued lobster. =D 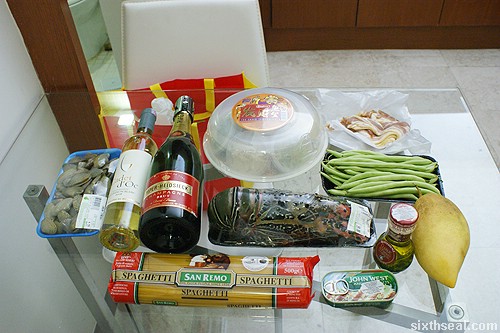 Anyway, when there’s Eiling, there’s always wine – she brought along a bottle of Piper-Heidsieck Champagne Brut and a bottle of Cadet d’Oc by Baron Philippe de Rothchild. This is what we used to cook the CNY (?) meal: 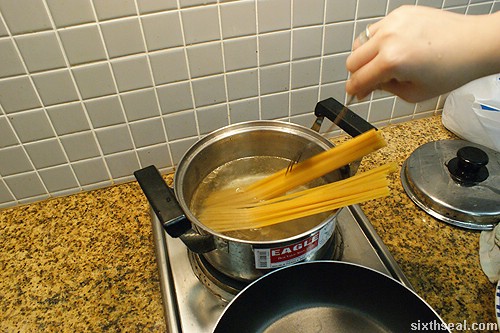 We started off by cooking the spaghetti until it was al dente with lots of McCormick’s Season All Salt. This is drained and left aside while the other dishes were prepared. 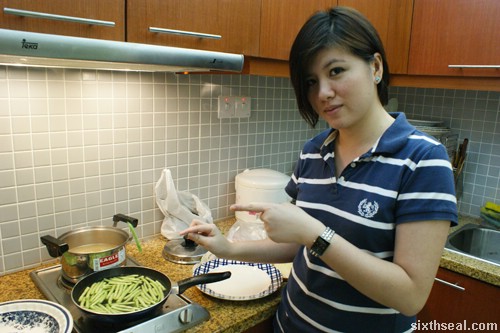 The bacon wrapped French beans is a concoction of Eiling – she shows how it’s done here. The beans are sliced into hors d’oeuvres sized pieces before being dipped in boiling water. Don’t overcook the veggies or it’ll lose the crunchiness! 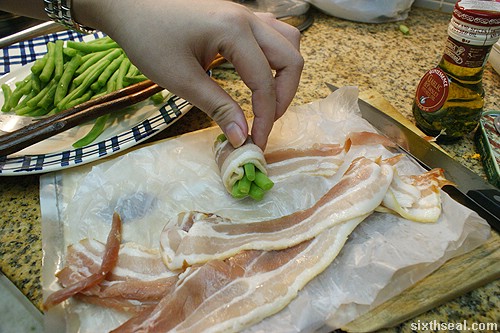 It is then rolled in a raw bacon slice. 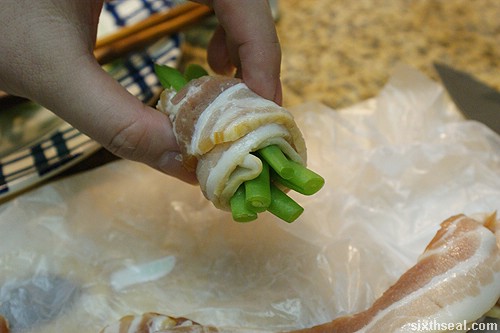 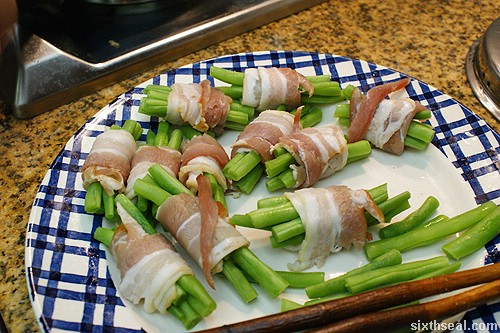 The bacon rolls are then fried with olive oil on low heat until it cooks. It is important not to overcook it, you don’t want crispy bacon, but something nice and chewy that drips with mouth watering lard. 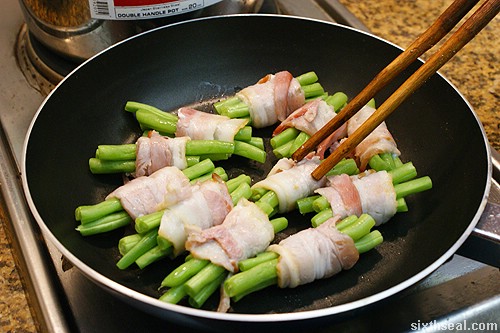 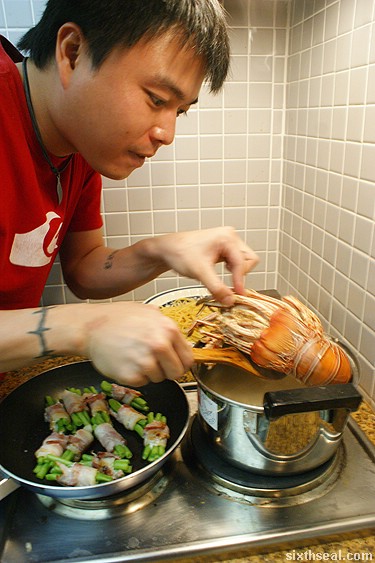 Okay, this motherfucker is a bit of a challenge to put into my pot so I cooked it tail first with the head sticking out. The water is seasoned with LOTS of salt so it would impart some into the lobster (or so my rationale goes). 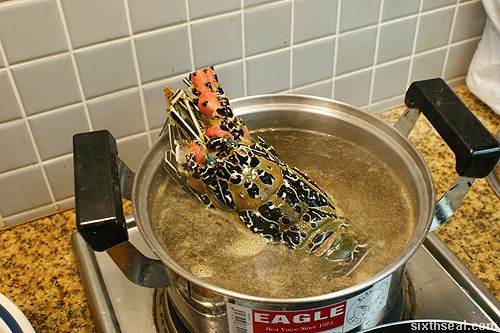 The lobster needs to be boiled for about 30 minutes or so – we turned it over to let the head cook and found out that after cooking, it is possible to stuff the entire lobster into the pot! 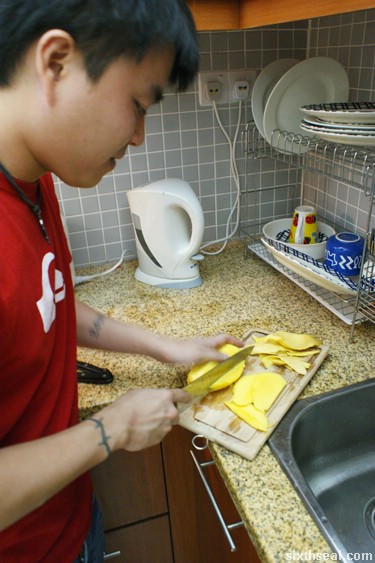 Take a break and dice the mango at this point. Choose one that is firm, yet sweet and juicy. 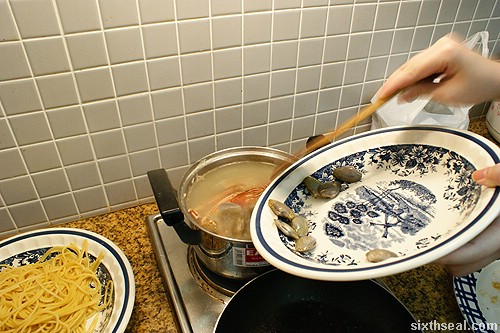 The clams go in last since they’re quite easy to cook. Make sure your lovely crustacean is cooked before you chuck in the clams. I have no idea how long you should cook it, we just guesstimated and it worked out very well!

You should reheat the pasta at this point – we used the broth from the lobster and the clams to reheat it, and it really imparts some flavor into the spaghetti! 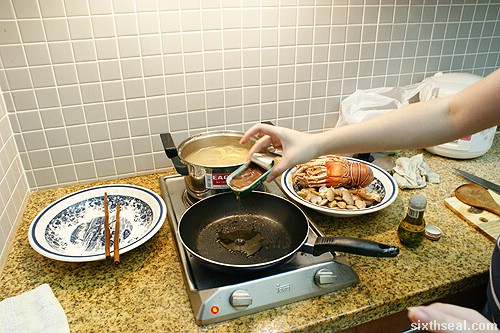 Now it’s time to make the aglio olio sauce for the spaghetti. Remember the frying pan you used to cook the bacon wrapped beans in? That’s perfect as a base due to the flavors imparted by the streaky bacon. Just add in the infused olive oil and pour in a bit of the anchovy fillet grease and you’re set! 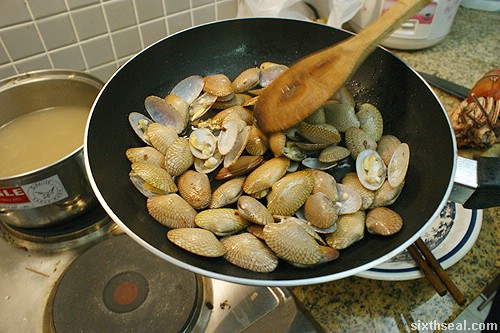 Dump the clams into the aglio olio sauce, fry it for a bit and pour the mixture onto your pasta! 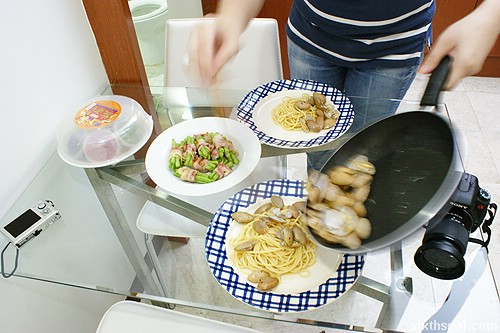 Don’t forget your anchovies to add a bit of zing (salt) into your spaghetti! 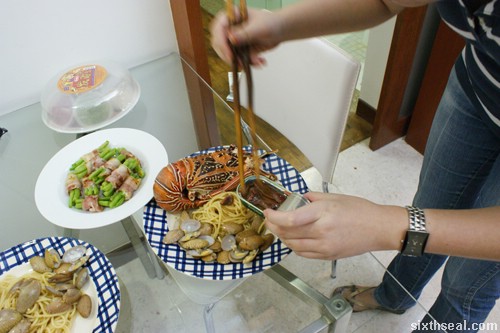 Eiling was a bit doubtful about the addition of mangos into the dish but I managed to convince her that it’ll taste great. It did! 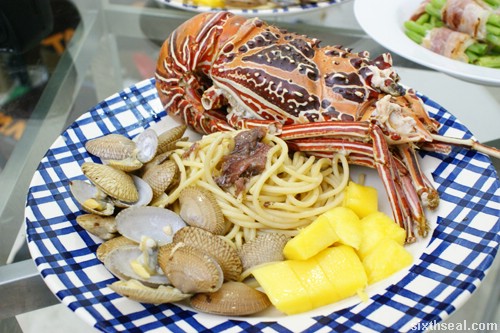 I really loved the lobster – it came out just nice, and the flesh is sweet and juicy. Digging into the lobster’s head and eating the stuff inside is pure heaven. 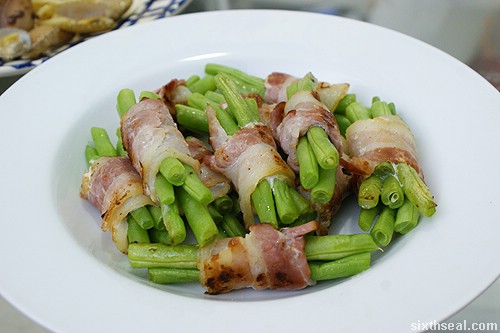 The bacon rolled French beans were great – the beans are crunchy and fresh while the bacon was done just right. The mango cubes worked very well too, providing a sweet and juicy burst of nectar which goes very well with the lobster and clam pasta. 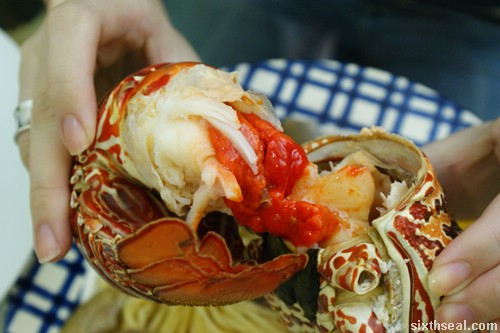 There’s a saying that all the meat in lobster is in the tail and I agree…but all the taste is in the head of the lobster!