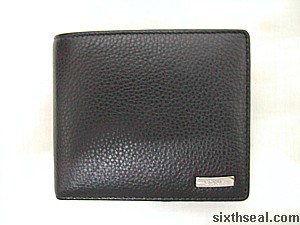 I have a new wallet, courtesy of my girlfriend. We went out for
lunch today at the Valentine’s Cafe in Paramount. I had intended to
order a la carte, but they were having a buffet, so we decided to go
for that instead. My apologies for the lack of photos from there, my
girlfriend banned me from taking photos because it generates too much
attention. 😛

Anyway, there were not many dishes, only about 8, but they were all
very good. The vegies were full of garlic (just the way I like it), the
noodles were salty (mmm) and the fish is smothered with Thai chili
sauce. All in all, the food was very tasty although there wasn’t much
variety. There were only 8 main dishes, a porridge (or maybe it was
soup), two cakes and two fruits. However, in my opinion, it was worth
the price of admission. I don’t know how much the service charge was,
and whether they charge different prices for males and females (yes,
they do that here), but the bill for the both of us came to RM 20.70
(around A$10).

After eating, we headed to Wisma Sanyan to go shopping for a new
wallet. I’ve been using my old wallet for 7 (!) years, coz I love it.
There were a lot of memories associated with it. I still remember the
place I bought the wallet and whom I was with at that time. I was at
Riccarton Mall, Christchurch (forgot the store name – it was Amazon or
Jungle something) with Sam Ashton and Eito, we were getting some beer
for a house party later on and I happened to see this particular wallet
and bought it on the spot. I didn’t remember much of the party (too
many “scene missings”) but I do remember leaning out of Victoria (Sam’s
girlfriend’s) car and throwing up when I was headed home. She told me
the next day that I had gotten vomit all over the side of the car and
she had to go to a petrol station to clean it up before she went home.
Oops! 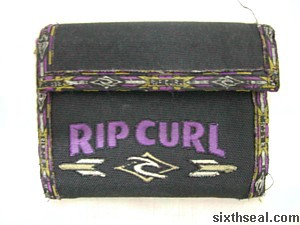 Since then, the wallet has seen currency of six different nations
(Malaysia, New Zealand, Australia, United States, Singapore and
Indonesia) and has also been drowned, burned and mutilated countless
times. It has been lost twice and returned both times (once with all
the cash missing). The first time it was lost was at a rave at Ministry
(Christchurch, NZ), where two blotters impregnated with a certain
lysergic acid created by Albert Hofmann of Sandoz Labs was consumed for
the first time. It was returned to me the next day by a friend who was
also at the rave with everything intact. Thanks Jack! The next time I
lost it was in school, it turned up at the Lost and Found with
everything NOT intact but at least it turned up. 🙂

Thus ends the life of this wallet and the beginning of a new wallet
era. I will miss you and the times we had together. The wallet is
tattered and old and feels strangely thin and impotent without its
previous contents. Rest in peace, dear friend and brother, in the third
drawer of my room’s desk.