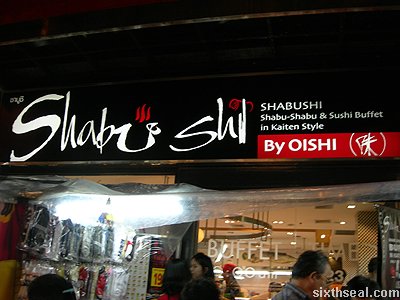 Shabu shi is a unique “shabu-shabu and sushi buffet in Kaiten style” restaurant located right smack dab in the middle of Pat Pong in Bangkok. The place charges 199 baht (about RM 20) for an all-you-can-eat buffet of shabu shabu (not that kind, the Japanese steamboat) and sushi. The name “Shabu shi” is a contraction of the words “Shabu shabu” and “Sushi“. 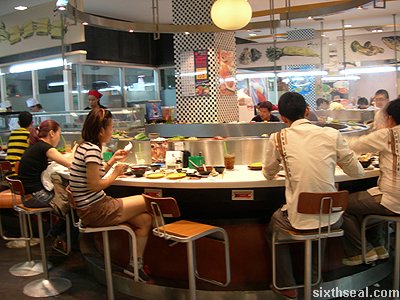 My gf was pretty hungry at the time (you don’t want to be near her when she’s hungry) so we went in and got seated. It turns out that there was a long line of people there – it’s a very popular place with the locals. I tried bribing the attendant with 1000 baht (RM 100) to “bump up our position in the queue” (that’s how scary she is when she’s hungry) but he didn’t bite. 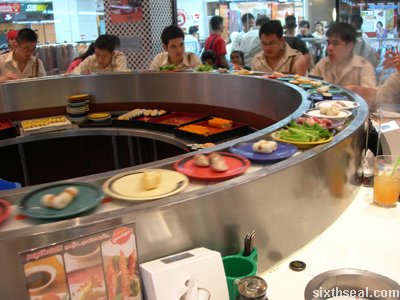 It took us a good 15 minutes of waiting before we got out turn. Shabu shi has bar style seating and table style seating arrangements, both of which are connected to a sushi train (conveyer belt) like contraption that has colored plates depicting the different dishes available for the steamboat and also sushi. 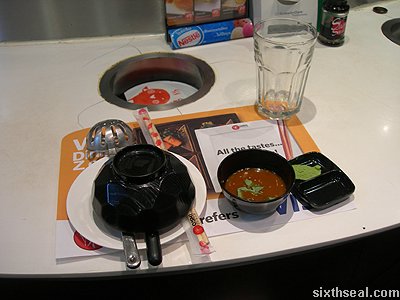 Shabu shi lays out the table with a bowl, a plate, eating instruments, dipping sauce and wasabi. There is an indention in front of every person which is where the shabu shabu (Japanese steamboat) goes into. The 199 baht admission price also allows you to a free flow of drinks ranging from tea to sodas as well as ice cream for dessert. 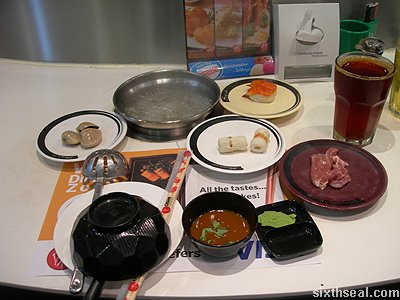 The water was set to a boil by using an individually controlled heat sensor located at the bottom of the place and we started to get plates of food to put into the boiling broth. Shabu shi has a wide range of Japanese steamboat ingredients ranging from clams to pork slices. Mmm…pork. 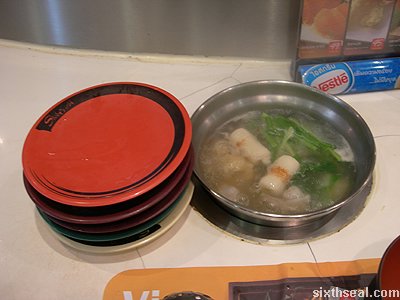 I dumped the stuff I like into the indented pot of boiling broth and waited for it to cook. The proper way to eat shabu shabu is to swish it around (shabu shabu literally means “swish swish” in Japan) but I couldn’t be bothered and I wanted to batch eat. 😉 I had a really heroic amount of empty plates stacked up too, but the overtly industrious people and Shabu shi kept on taking them away. 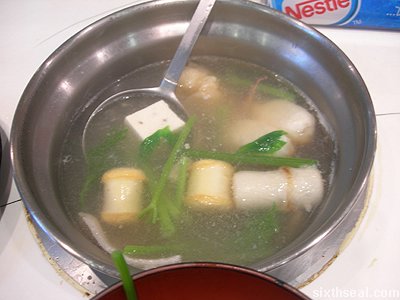 The cooking didn’t take long and I scooped up the stuff into the small bowl for eating. I don’t really like tofu btw, in fact, I hate it, but my gf dumped it into my soup anyway. 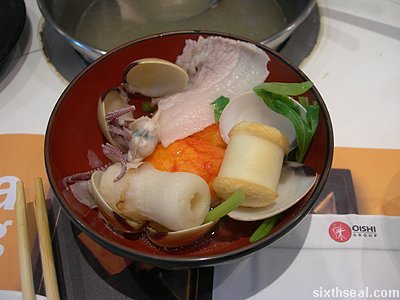