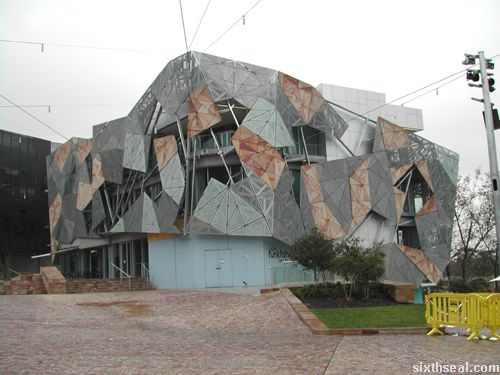 Angles. This is a photo of Federation Square
[federationsquare.com.au], a relatively new structure filled with
angles located in the center of Melbourne (Australia) city. The picture
only shows a very small portion of the whole construct. The
construction of this large project was received with mixed responses
[theage.com.au]. It was officially opened on the 26th of October 2002,
but some features were not fully in place at that time. The most
memorable comment I heard about it was this taxi driver who said “Look at this ugly building. I don’t know what the fuck the government is thinking. It’s ruining the city.” One of my friends replied “Well, it does have a certain artistic quality to it…” and the driver made a “pfft” sound and said “I still think it’s terrible.”
🙂 Personally, I like Federation Square, it’s unique and nicely built.
This has the potential of becoming an “icon” of Melbourne like Sydney’s
Opera House. There’s quite a bit of interesting features about it, the
official site is a good read if you’re interested. I took this photo
four days ago in an attempt to document Melbourne in photos before I
leave for good in two days. The weather was not optimal (drizzling +
misty) but the focus seems unaffected.

The post-production work was done in Photoshop 7.0 and involves: